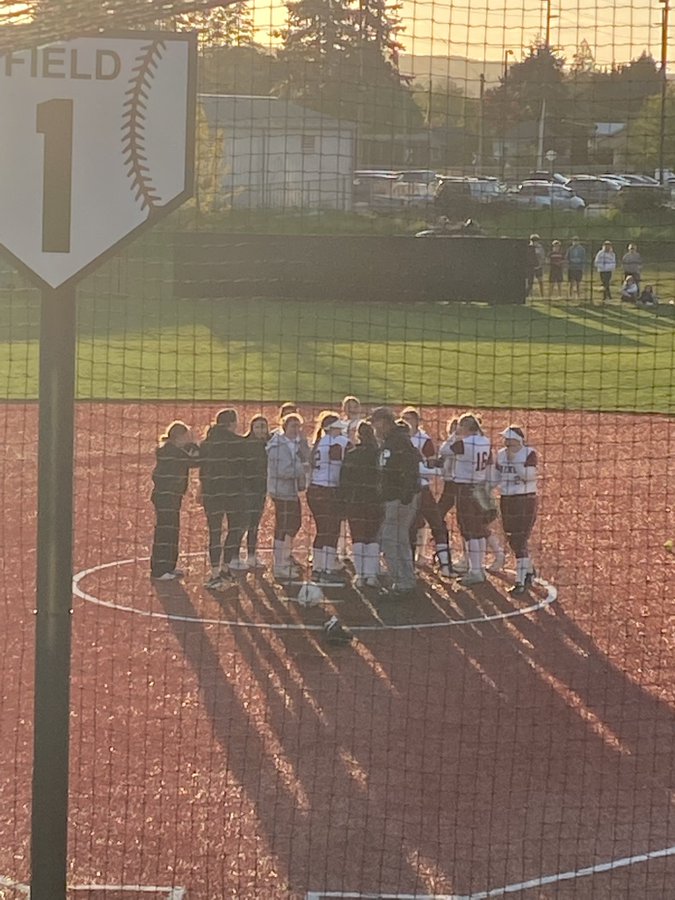 (Chehalis, WA) There are a handful of games that when you are broadcasting you can just feel they are going to be special. Games like that you just know you will remember forever. Friday night for me was one of those games. For the fourth time this season, the WF West Bearcats and Tumwater Thunderbirds met on the fastpitch field. This time, the District Championship was hanging in the balance.

The previous three meetings were all very closely contested. Tumwater won game one by a score of 3-1 in a game dominated by freshman pitcher Ella Ferguson. Game two was similar for six innings until Savannah Hawkins played hero with a walk off home run to give WF West the 5-3 victory. Then Ferguson and Bearcat pitcher Kamy Dacus stole the show in game three but it would be Tumwater getting the 2-1 victory to win the league title.

Both Dacus and Ferguson got the start for their respective team and both saved their best performance for this district title game. Both pitchers had no real trouble getting through the first couple innings. In the third was when Tumwater put some pressure on Dacus.

Emily Robello would reach second with just one out and the top of the Tumwater order coming to the plate. Leadoff hitter Aly Waltermeyer would then drive a ball to deep center field and it looked like Tumwater was going to get on the board. Bearcat centerfielder Lena Fragner had different plans as she leaped up into the fence to make a great catch and keep Robello at second base. The next batter Jaylen Latchaw would line a ball into left field for a base hit. Chase White would come up throwing however and threw a strike to catcher Rachel Gray to tag Robello out at the plate to keep the game scoreless.

The game would stay scoreless headed to the bottom of the 6th. Aly Waltermeyer reached third with just one out and Tumwater senior Jaylene Manriquez coming up to the plate. Dacus would quickly get ahead of Manriquez 0-2. Manriquez would get her pitch though and lined it over the fence in left for a two run home run and gave Tumwater a late 2-0 lead.

The 7th would turn into a wild inning. WF West would have runners on first and second with one out and leadoff hitter Lena Fragner coming to the plate. Fragner would hit a hard ground ball to Scout Abbott at third and Abbott would step on third for the force out before the throw to first would get away from Megan Paull to allow the runners to move up.

The Bearcats were now down to their last out with a runner on third and the tying run on second. Brielle Etter would step up and she would come up with the most clutch hit of the Bearcats season. A blooper into right field would find the grass and both runners would score and just like that the Bearcats had tied it up at 2-2.

Tumwater would then intentionally walk Savannah Hawkins and then hit Kamy Dacus to load the bases with two outs. Avalon Myers would then smoke a grounder into right center field. Both Etter and Hawkins would score and the Bearcats had a 4-2 lead with all four runs coming with two outs in the 7th.

Kamy Dacus would then go pitch a 1-2-3 inning to give the Bearcats the win and the District Championship. For the Bearcats it is their second straight district title. The Evergreen Conference league champions Tumwater fall just short but fought the entire way and still have an incredibly bright future with lots of returning stars next season.

Our Pacific Sports Spa MVP for WF West was Brielle Etter with her game tying single. Our Thorbeckes MVP for Tumwater was Jaylene Manriquez with her two run home run and some good defense as well.

Both teams now begin preparations for the 2A State Tournament this weekend. The second seeded WF West Bearcats will take on #15 Sequim in the first round while the #6 seeded Thunderbirds will take on #11 North Kitsap. Both first round matchups will be on Friday at 10am.