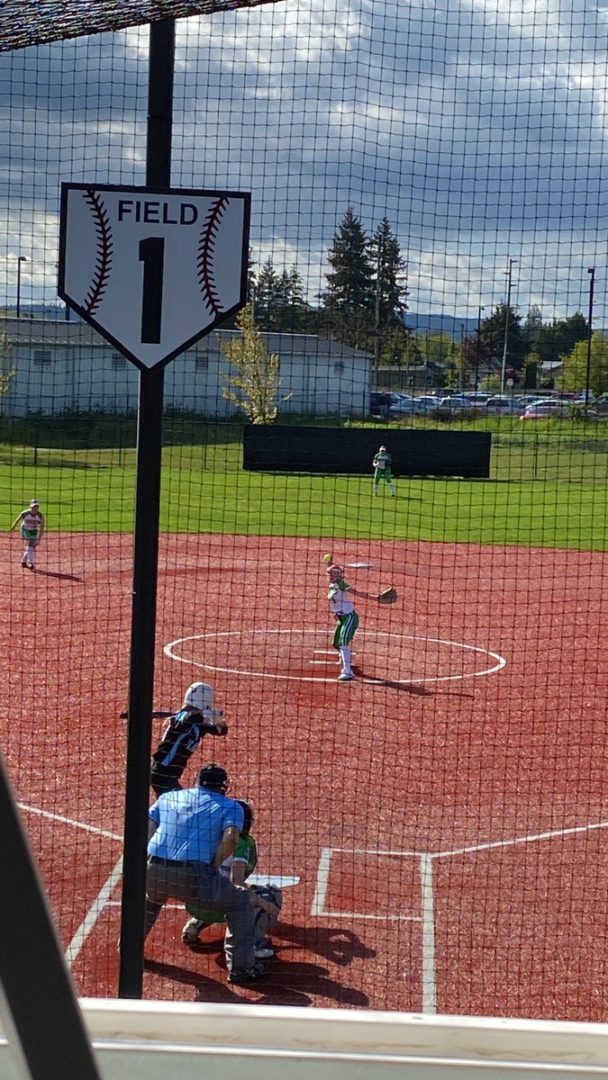 (Chehalis, WA) Fastpitch district tournaments got started this week and we were at the District 4 2A fastpitch tournament yesterday. All four fields were used with two games being played on each of them for a total of eight games featuring EvCo and GSHL teams. Here are our quick recaps of all eight games from the first day of the tournament.

The first round started with Tumwater taking on a Hockinson team that ended finished the season very well to get a spot in the district tournament. They started out very well as after neither team scored in the first three innings, Hockinson jumped out to a 3-0 lead in the 4th inning before a rain delay. Tumwater would then answer after the short delay with 4 runs to take the 4-3 lead into the 5th.

Freshman pitcher Ella Ferguson then had a bumpy 5th inning as Hockinson took the lead back 6-4. The T-Birds would pick up their pitcher with two in the 6th. Ella Ferguson then got dialed back in and would finish with 11 strikeouts. Hockinson pitcher Lilli Seale was also dialed in with a scoreless 7th to send the game to extras. In the bottom of the 8th, it was Scout Abbott with a base hit up the middle to score a run and send Tumwater to the semifinals with a 7-6 win.

The undefeated Ridgefield Spudders came in with a lot of hype and they lived up to it in the first round. After falling behind the Bobcats immediately 1-0, the Spudders put a lot of pressure on Aberdeen and finally started finding some holes in the Aberdeen defense. A tough inning for the Bobcats was all Ridgefield needed to get the momentum back in their favor.

Aberdeen, who won a pigtail game against Mark Morris, couldn’t get the bats working again after the first inning. Ridgefield would use pitching and timely hitting to defeat the Bobcats and move to 21-0 thanks to a 10-1 victory to advance to the semifinals.

The Lumberjills bats got off to a great start as they would jump out to a 3-1 lead over Rochester and chasing the Warriors starting pitcher from the game in the 2nd inning. Layna Demers came out of the bullpen and was dominant for Rochester. The bats also woke up thanks to home runs from Sadie Knutson and Layna Demers.

RBIs from Gracie Byrnes, Lily Mattison, and Nicole Walker still had RA Long on top but after the rain delay, Rochester tied up the game at 3-3. The Warriors would then grab a 4-3 lead. Rochester then put up three runs in the 6th with two off the bat of Jessa Lenzi. RA Long would get one back but Rochester hung on for the 7-4 win to advance to the semifinals. Layna Demers went 5 2/3 in relief without allowing an earned run to get the win.

The defending district champions flexed their muscles in the first round rolling to a 5 inning win. Senior Kamy Dacus was once again the story with five dominant innings while only allowing two hits. She would finish game one with eight strikeouts.

On offense, it was all hands on deck as three Bearcats drove in multiple runs. Brielle Etter, Avalon Myers, and Staysha Fluetsch went a combined 8 for 10 with six RBIs and three runs scored to send the Bearcats to the semifinals.

While Ella Ferguson had a tough outing in the first round, she had no issues in the semifinals. The freshman gave up just one earned run while striking out six in a complete game win over Rochester. Sadie Knutson and Layna Demers would fill up the zone but the T-Birds bats were just on another level.

Tumwater would tally 11 hits and Aly Waltermeyer would lead the way by going 3 for 3 and accounting for five Tumwater runs as she would drive in two and scored three more. The win advances Tumwater to the state tournament and they will play for the district title on Friday at 6pm.

All good things must come to an end and it would be WF West ending Ridgefield’s undefeated season in the semifinals. Kamy Dacus was brilliant for the Bearcats as she would throw a complete game allowing six hits, just two runs and striking out 11 batters. Dacus also went 2 for 4 with an RBI at the plate. Saige Brindle would have a monster game for WF West going 3 for 4 with a home run, four RBIs and a run scored.

Makayla Ferguson would homer for the Spudders to try to start a comeback. They would then have a couple runners reach before Dacus slammed the door on the comeback attempt. The win sends the Bearcats to the district championship to take on Tumwater. The win also locks up a spot in the state tournament for WF West for the 16th straight state tournament.

Aberdeen would get the bats going in a major way in the first elimination game. Columbia River would get off to a great start with Aurora Wiley and Taylor McRae driving in runs to give the Rapids a 2-0 lead. Both teams would explode in the middle innings but the Bobcats would build a 6-5 lead. The Bobcats would score seven in the bottom of the 5th to pull away.

Merryn Bruner would go 3 for 4 with two home runs and four RBIs to keep Aberdeen alive for a place in state. Aberdeen will play Rochester on Friday at 4pm in a winner to state game. Columbia River’s season comes to an end.

RA Long would strike early against Hockinson thanks to an RBI single by Miranda Bergquist and an error to put the Lumberjills up 2-0. Maggie Skinner would then hit a two run homer to even the score for the Hawks at 2-2. Jadyn Terry would then score on a wild pitch and RA Long would add on two more. Terry would then shut the door in the circle with a complete game while allowing only three hits and just the two runs.

RA Long will now take on Ridgefield in a winner to state game on Friday at 4. Hockinson’s season unfortunately comes to an end.

RA Long vs. Ridgefield at 4pm
Aberdeen vs. Rochester at 4pm

WF West vs. Tumwater at 6pm