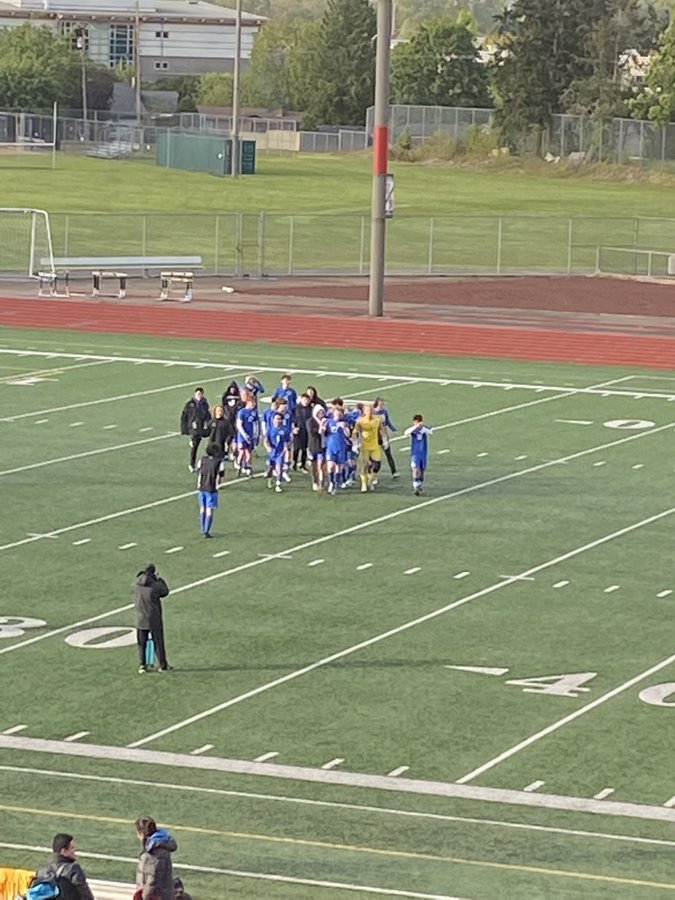 (Lakewood, WA) The Stadium Tigers channeled their inner Rocky Balboa from Rocky III on Thursday night. In that film, Rocky takes Clubber Lang’s best shots and tires him out before taking over late to capture the heavyweight championship. At Harry E. Lang Stadium, the Stadium Tigers took their Bainbridge Spartans best shots in the first half before taking over in the second half to walk away with the District 3/4 3A boys soccer title.

Coming into the District Tournament as the #6 seed, it was going to be a tough road for the Tigers to capture that District Championship. They would shutout Mountain View 3-0 and then Peninsula 1-0 in route to the finals. The #8 seed Bainbridge Spartans also had to battle some higher ranked teams as they defeated the #1 RPI team in Silas 2-1 before surviving seven rounds of PKs to defeat Gig Harbor 1-0.

In the opening half, it was all Bainbridge. The Spartans dominated possession and had plenty of first half looks. John Roman sent an absolute rocket just over the crossbar early and that set the tone for the half. Stadium seemed to be off to a rough start in their attacking third. The defense and goalie Sam Walter all stepped up to help the Tigers survive the early onslaught. Bainbridge continued to stay cool, calm, and collected and just kept firing shots at Walter but couldn’t find the back of the net. After 40 minutes of Spartan dominance, we were scoreless at halftime.

Something at halftime flipped the switch for the Tigers. They came out very aggressive on defense and started forcing mistakes and gaining extras possessions. It immediately had an impact because Bainbridge started getting more physical to try to counter the aggression from Stadium. It worked for awhile, but then the Spartans got to physical and committed a foul just outside the 18 to give Stadium a free kick. A free kick turned out to be the opening the Tigers needed. In the 45th minute, Owen Bliskis did what he did in the semifinals and placed a perfect shot around a wall into the back of the net to put Stadium up 1-0.

All of a sudden, the Spartans had their backs up against the wall. They started to really push the tempo to try to find the equalizer. The offense and midfield did a great job of creating opportunities and did what they did in the first half, peppered shots at Stadium keeper Sam Walter. But in this game, Sam Walter would become Superman Sam with some incredible saves. He would cap off his incredible night with one of the saves of the year by going completely horizontal and snagging one out of the air to preserve the Stadium victory.

The Stadium Tigers would hold on for the 1-0 victory and win the District 3/4 3A boys soccer championship. Stadium would not allow a single goal in their three District games and will now look to carry that momentum into the state tournament. The Bainbridge Spartans will also continue their season in the state tournament. Both teams will learn who they will play in the first round of state on Sunday. Check out WIAA | Washington Interscholastic Activities Association for further updates.