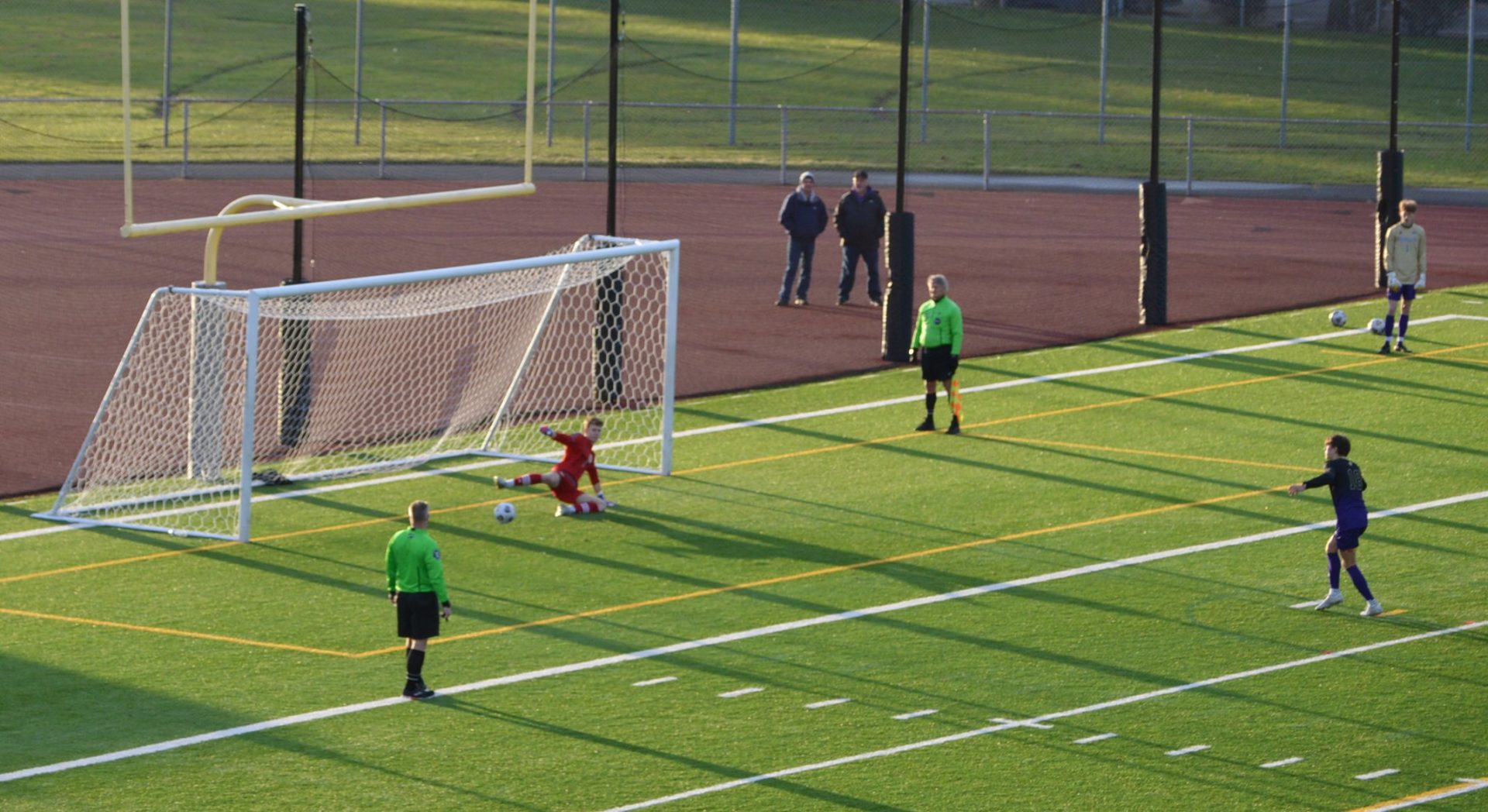 (Puyallup, WA) It was Deja Vu on opposite day for the Union Titans when they took on the Puyallup Vikings Thursday night at Sparks Stadium in Puyallup. On Tuesday the #4 seed Titans scored 1st on #1 seed Bellarmine Prep just 6 minutes into the match. The Lions scored the equalizer 4 minutes into the 2nd half and the 2 teams went to a 6-round shoot-out where Union came out with the win 4-3.

On Thursday, Puyallup scored first in the 5th minute, Union would get the equalizer in the 2nd minute of the 2nd half and the 2 teams would end up in a shoot-out but this was an epic adventure going 16 rounds and Puyallup prevailing 13-12 as Liam Stoner finally put in the game winner.

The Vikings scored 1st off a corner kick that got deflected right to Roby Hooper who then blasted it into the net for the 1-0 lead in the 5th minute. Union would hold firm for the rest of the half and the game went to the break with Puyallup up 1-0. It didn’t take long for Union to even the match in the 2nd half when Garik Shevchuk fired the tying shot in the 42nd minute off an assist from Isaiah Bunda.

After that both keepers and the backlines shut it all down forcing 2 5-minute Golden Goal OT’s that again were fruitless that pushed the match to a shoot-out. The Shoot-Out could have been over in 5 rounds with the score tied 4-4 and Puyallup shooting last in round 5 but Rory McDonald came up huge with a block to force the 1st of 11 extra rounds.

In that time Vikings keeper Nathan Vitzthum had knocked down Union’s 2nd attempt and then proceeded to block Union’s 8th and 12th attempts setting up a game winning chance for his offense but both times the shot was high or wide keeping Union in the match. Then the theme of this match opposite Deja Vu struck again. In the critical 5th round to extend the match Union’s Josh Boda had to make his shot to tie the match and give his keeper McDonald a chance to block Puyallup’s Liam Stoner’s shot to push it to a 6th round and that’s exactly what happened. In the 16th round, Boda had a chance to give Union the lead and put the pressure on Puyallup but this time Vitzthum smothered the shot, his 4th block of the shoot-out. Stoner then looked for redemption and got it knocking the winning shot into the back of the net.

Our MVP’s went to Union’s Garik Shevchuk who scored the goal in regulation and hit both of his shoot-out shots and for Puyallup no doubt it was keeper Nathan Vitzthum with a dominating performance in goal.

Puyallup will get a boost with the Championship going into the selection committee on Sunday and even with the 2nd place finish Union as the 4 seed will sure to impress the committee. The State bracket will be determined by the committee on Sunday morning and is expected to be announced by Sunday afternoon. The 1st two rounds will be hosted by the higher seeds and the Final 4 will play at Sparks Stadium in Puyallup on May 27 and 28.

Below is our ESN Postgame show and highlights including the entire 16-round shoot-out.

Union ties it up early in the 2nd half

The full 16-round Shoot-out

No doubt both teams were disappointed they were playing for 3rd after coming into the tournament as the top 2 seeds, Bellarmine Prep #1 and Kennedy Catholic #2. But they sure didn’t play like this match was for nothing. Both teams were aggressive and it was played all-out and that is the mark of how both teams are coached.

The two squads had chances in the 1st half but defenses prevailed with a 0-0 tie at the half. Bellarmine Prep knocked in what looked like may be the only goal of the match in the 53rd minute when Dane Price led Christian Salas with a nice pass and Salas slammed it in for the go ahead goal.

As the half wore on several missed chances by both the Lancers to tie the match and the Lions to extend their lead came to a head when Lions keeper Jayson Baldwin misread the defense after a save and tried to clear the ball when it was mis-directed to Oscar Castillo who quickly spotted Baldwin out of position and launched a shot from outside the box ahead of the retreating Baldwin and into the net for the tying score.

It looked like this district final 4 match was headed to OT just like all of the other 3 but Jagger Judkins had other ideas for Bellarmine Prep when he took a pass from Salas and looped it over the top of Lancers keeper Ethan Zarnick and in for the winning shot with about 1 minute left to play.

Below are video highlights and our full broadcast Post-Game show with a complete re-cap.

Kennedy Catholic ties it up

The Lions with the game winner in stoppage time