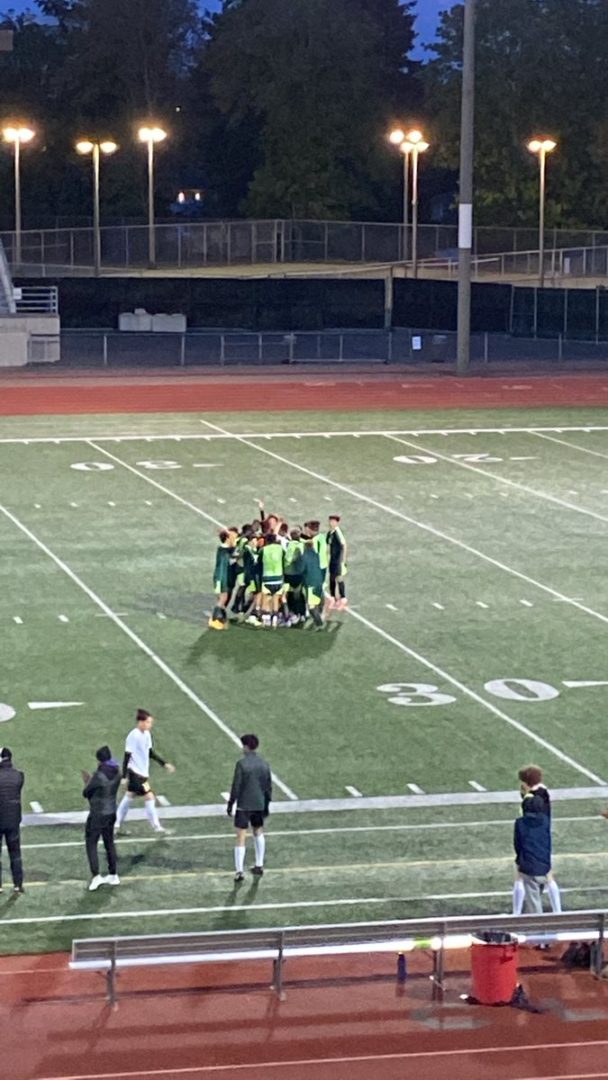 (Lakewood, WA) The old saying “It’s not how you start, but how you finish,” was on full display Thursday night. In the District 2/3 2A boys soccer semifinal match, Clover Park would get to play on their own field but looked lost in the first half. The slow start wouldn’t define them. The Timberwolves would storm back to take down the Sequim Wolves 2-1 to advance to the District Championship.

Sequim came out of the gates playing very well. The Wolves weren’t rushing anything and just got a feel for Clover Park. Sequim got some good looks on goal but couldn’t get any early goals. That was until the 17th minute when Aidan Henninger would hit an accurate shot just below the crossbar to give the Wolves the 1-0 lead. He would also celebrate the goal with a backflip.

Clover Park struggled in the first half with only a few looks at goal. The T-Wolves passes were all in the air and the height advantage of Sequim allowed them to win those 50/50 balls and give them extra possessions. The Timberwolves speed advantage was completely negated because of the passes staying off the ground. After fending of more Sequim attacks, Clover Park finally countered. A perfectly time run by Alexis Gutierrez would give him an extremely tough angle but he would some how pull a rabbit out of his hat and hit the tough shot in the 38th minute to even the score at 1-1 at halftime.

In the second half, everything changed. Clover Park started keeping their passes on the ground and had much better possessions and put the Sequim defense on their heels. The speed of the Timberwolves was finally on display, but the Sequim defense did a great job stopping any looks that Clover Park had. But then something happened. The Clover Park bench walked over to the crow and started an “I Believe That We Will Win” chant. The energy of the crowd was felt immediately. After returning to the bench, Edison Cid-Martinez would light up the crowd with a 75th minute goal to give Clover Park the 2-1 lead and the win.

Our MVPs of the match were Aidan Henninger for Sequim and Alexis Gutierrez for Clover Park.