Soccer: District 3/4 4A Upsets in Semi-Finals Union will face Puyallup for Dist Title 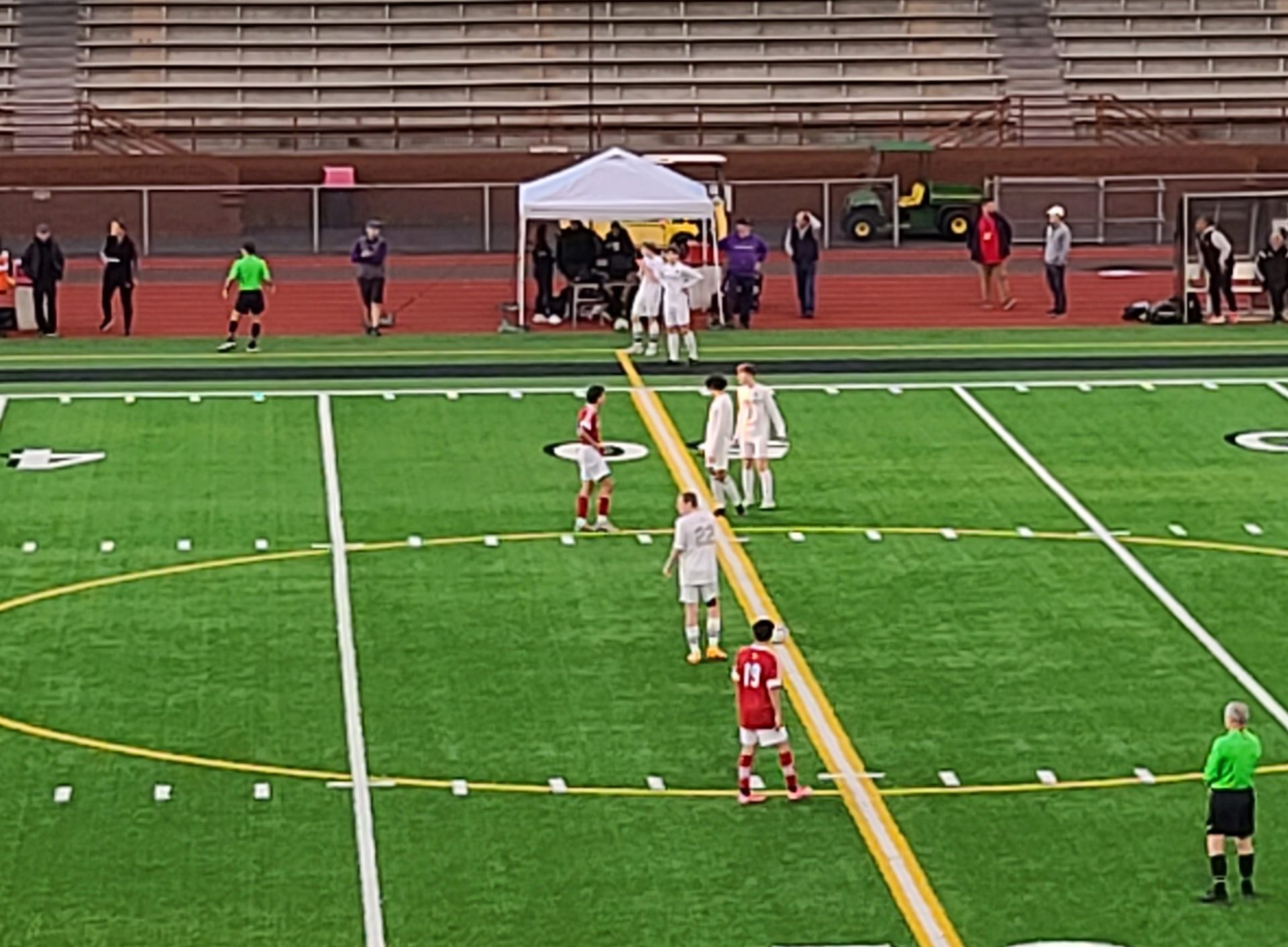 (Puyallup, WA) It isn’t surprising when the top seeds all advance to the Semi-Finals in any District Tournament but it is a bit surprising when neither the 1 or 2 make it to the District Championship match but that is what happened Tuesday night at Sparks Stadium. In the first match of the District 3/4 4A tournament #1 seed and #1 RPI team Bellarmine Prep took on the 4 seed Union who happened to be the #2 RPI team. In the second game it was the 2 seed Kennedy Catholic facing 3rd seeded Puyallup and in both case the lower seed came out with the win and both in overtime. Our re-caps are below with video highlights.

From the beginning the Titans were there to show Bellarmine Prep they were for real. They were the immediate aggressors which seemed to take the Lions by surprise and just 6 minutes into the match Union struck with a goal by Isaiah Bunda assisted by Josh Boda. The Lions got the message and stepped up their play and built several attacks that were snuffed out by Union keeper Rory McDonald and the backline of Rostyslav Koval, Jacob Miklas and Ivan Cheburakov. The match would go to halftime with Union leading 1-0.

Bellarmine Prep had indeed stepped up their game and became a bit chippy just prior to half and there were several yellow cards issued throughout the match. The Lions were ready to roar back at Union and used the same blueprint as the Titans used to begin the 2nd half and came out super aggressive. It took just 4 minutes for the equalizer when the Lions Henry Marlow fresh off the bench punched in the tying goal on an assist from Jaggar Judkins and in the 44th minute it was all square at 1-1.

Both teams would have chances to score for the rest of regulation and 2 5-minute overtimes but both defenses stepped up again and for the Lions keeper Jayson Baldwin and defenders Liam Miller, Jack Radovich and Bryson Hyatt shut out the Titans for the final 84 minutes of the match.

This pushed the match to a shoot-out and after 5 rounds it was tied 3-3. Both McDonald and Baldwin came up big with 2 saves each, none of the shots missed they were all on frame and swallowed up by each keeper including a match saving smother by McDonald in the top of the 5th round. Bellarmine led 3-2 and a goal would give the Lions a 4-2 lead and clinch the win. McDonald then swamped the kick attempt from Jack Radovich. Union then needed a successful shot to push the shoot-out to extra rounds and Isaiah Bunda knocked it in to tie it 3-3.

This forced a 6th round and Dane Price lined up his attempt for Prep to try and put the pressure on Union but once again McDonald knocked it down and now Union had the advantage and all they needed was to have Liam Wendel convert his kick for the win. Fortin punched it past Baldwin who had already knocked down 2 of 5 attempts and the Titans pulled off the win and will advance to the District finals on Thursday at Sparks Stadium in Puyallup. They will play the 5:30 match on Thursday to allow them to get home at an earlier time than if they played the 7:30 match.

Our MVP’s went to Union’s Rory McDonald with 3 of 6 saves in the shoot-out and for Bellarmine Prep Jaggar Judkins who assisted on the regular time goal and did hit his shoot-out shot as well. Union will face Puyallup for the District Championship and Bellarmine Prep takes on Kennedy Catholic for 3rd place. All 4 teams will advance to the State Tournament.

Union Gets on the Board 1st

Bellarmine Prep with the Equalizer

In the 2nd match of the night it was also a defensive struggle as neither team could get a ball into the back of the net for 80 minutes. Some of it was brilliant defense and keeper play and some were simply missed shots that each team wished they could get back and do over.

Kennedy Catholic’s best chance was Diego Chavero’s blast from inside the 18 and it bounced off the crossbar just missing a sure goal. Puyallup’s Jose Hernandez had a similar opportunity but just pushed the shot wide. For the Lancers Henry Heater, Oscar Castillo and Jose Pineda Anguiano were also pressing the offense but could not come up with the scoring combination. On Puyallup’s side Chae McMillian, Liam Stoner and Zack Robertson all had chances but just fell short.

Meantime the Vikings defense led by keeper Nathan Vitzthum and defenders Lucas Foster, Jacob Goter and Jet Hazen were very stingy limiting the Lancers. For K-C it was James Czuk in goal the 1st half and in the 2nd half Ethan Zarnick. But Marc Christianson shined on the backline with Cristian Herrea Ortiz and Nicholas Mariani forcing the game to overtime at 0-0.

After just watching a match go through two 5-minute Golden Goal OT’s, which means if a team scores the game is over, and then a 6 round shoot-out our expectations were another shoot-out on the way. The Vikings had other thoughts and as the 1st OT was winding down in stoppage time and they got a corner kick. Dean Williams lined it up and lobbed it perfectly into the box and Puyallup’s Ryan Cunningham re-directed it past Zarnick who didn’t have a chance to knock it down.

Puyallup was the 3 seed coming into the District Tournament and Kennedy Catholic the 2 seed so now Puyallup will face the 4 seed Union for the District Championship on Thursday at 5:30 in Puyallup while the 2 seed Lancers and 1 seed Bellarmine Prep will play for 3rd at 7:30. All 4 are headed to state these matches were for the District placings and will help them with seeds into state.

Our MVP’s went to the Vikings Ryan Cunningham and the Lancers Diego Chavero.

Puyallup with the Game Winner