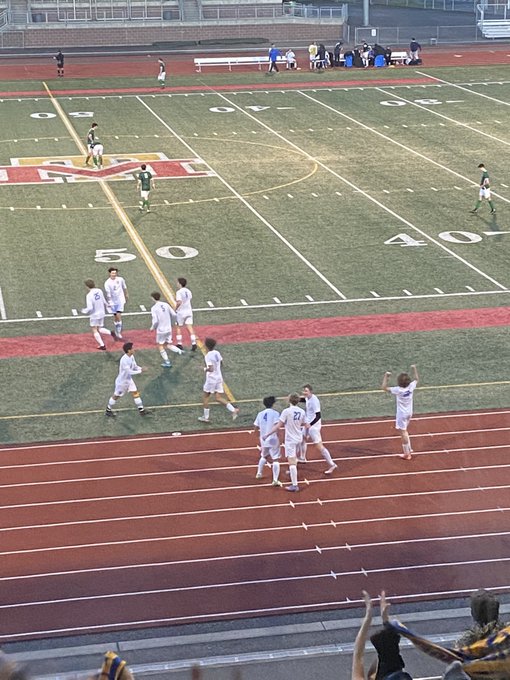 (Tacoma, WA) After a chaotic first round of the District 3/4 3A boys soccer tournament, only one of the top four seeds advanced to the semifinals. The semifinals would pit the 8 seed in Bainbridge against the 5 seed Gig Harbor and the top seeded Peninsula against the 6th seeded Stadium. With all 4 teams having punched their tickets to state, it was all about that District Championship. At George Nordi Field at Mt. Tahoma stadium, the chaos would continue with a penalty kick shootout and a late goal to set up an 8 vs. 6 final on Thursday. Our stories and highlights are below.

In the opening match of the evening, both teams came in feeling a lot of confidence after opening round wins. Gig Harbor put up five goals in a win over Auburn Mountainview while Bainbridge had upset the top team in the RPI in Silas. Neither team came out in much of a hurry however.

Patience was the theme early on for both sides. Bainbridge used the entire field to try to create space and open up passing lanes. Gig Harbor looked more than happy letting the Spartans pass the ball around on their half the field. Bainbridge would then turn up the tempo to try to create opportunities on offense. Damoni McKenna-Greenawalt was all over the field for Bainbridge early but couldn’t seem to find an open opportunity. The Tides goalie Aiden Bartlett and the defense led by Jett Manglona helped Gig Harbor get through the early push.

The Tides would then get aggressive later in the first half. They had trouble getting through the size and physicality of the Spartans defense however. Bainbridge goalie Caleb Saks looked extremely confident and scooped up everything that got inside the 18. The best look for either side in the first half was a shot from about 25 yards out by Gig Harbor’s Kaiser Keck that rattled off the post and out of play. We were scoreless at halftime.

Defense ruled the second half as well but now it was Gig Harbor dominating time of possession. John Roman stepped up in the midfield for Bainbridge and played a little bit more defensively and that turned out to be the right strategy. Kaiser Keck and Conner Louden continued to fire shots from far out but Saks continued to play extremely well in goal. He would come up with another late save to keep things scoreless and send the match to overtime. Neither team would find the back of the net in the two 5-minute overtime periods this match went to penalty kicks.

Right out of the gate Bainbridge had the advantage in PKs when Caleb Saks blocked the very first shot from Jett Manglona. Things would get worse for the Tides when Saks saved the third shot as well giving Bainbridge a chance to go up 3-1. However, Aiden Bartlett would come up with a massive save for Gig Harbor to make it 2-1 headed into the 4th round. Matt Ludlow would hit his shot and the Spartans would send their shot over the crossbar to make things even at 2-2 headed into round 5. Both teams hit the shots in round five to send the match to bonus PKs.

Both teams would hit shot #6 as Gig Harbor’s Owen Ghent and Bainbridge’s Zach Schramling would send the shoot-out to round 7. Then, Gig Harbor would send their shot off frame to give Bainbridge and Carlos Field-Bennett a chance to advance to the title game. Field-Bennett would sneak it inside the left post to win the shoot-out for the Spartans 5-4 and take the match 1-0.

Our MVPs of the match went to the two keepers who put on a show in Aiden Bartlett for Gig Harbor and Caleb Saks for Bainbridge as they totaled three saves combined in the shoot-out as well as some great saves during regulation as well. Gig Harbor will now play for 3rd/4th place on Thursday against Peninsula at 7pm. The Bainbridge Spartans will take on Stadium for the District Championship also on Thursday at 5pm.

In the second semifinal, we saw once again a feeling out process early. Peninsula came out of the gates absolutely dominating possession. The Seahawks were looking to strike quickly and catch the Stadium defense off guard. The Tigers seemed to be a little stunned at first and gave up some corners but the defense stood their ground. Riley Pryor, Jackson Hendricks and Ryan Vu did a great job to help the defense survive the early pressure

When Koren Anderson checked in just after the 20th minute, things all of a sudden changed for Stadium. Anderson immediately started upping the pressure on offense for Stadium by pressuring any pass made by Peninsula. The Tigers took a lot of those pressures and turned them into extra possessions and started putting pressure on the Peninsula backline and goalie. Yzahir Cornelio was unbelievable for the Seahawks coming up with some great saves to keep things scoreless at halftime.

In the second half it was once again Stadium putting pressure on Peninsula and intercepting passes on their attacking half. Max Hymer did a nice job of setting up his teammates but they still couldn’t get anything past Yzahir Cornelio. Then in the 64th minute, Owen Bliskis would fire a perfectly placed shot over the top of Cornelio and would give Stadium a 1-0 lead.

The Tigers would then turn to defense and focus on slowing down the Seahawks attack. Cory Burbridge and Justin Bodnar would turn up the tempo late and Peninsula started threatening. The Seahawks would get a good look at an equalizer late but it was the Stadium keeper Sam Walter who came up with a big save and would help Stadium hold off Peninsula for a 1-0 win.

The 6th seeded Stadium Tigers will now move on to play for the District Championship at 5pm on Thursday against Bainbridge at Harry Lang Stadium in Lakewood in a match you can see right here on ESN. The top seeded Peninsula Seahawks will now move into the 3rd placed game where they take on Gig Harbor for the third time this season. Peninsula won both of the previous matches.

Our MVPs for this semifinal were Owen Bliskis for Stadium and Yzahir Cornelio for Peninsula.