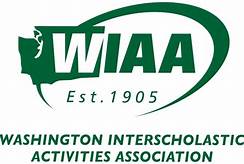 (Renton, WA) The WIAA Representative Assembly passed 4 of the 7 proposed amendments while 1 amendment was withdrawn and 2 failed. The headliner of approved amendments is for some in-house re-modeling so to speak. Currently 9 districts make up the WIAA with each district representing a geographic area. There is no minimum number of schools for each district.

There are 4 districts in Western Washington, District 1 is from Blaine to North King County, District 2 is the Seattle/Bellevue Metro area, District 3 is South King County to Olympia and half of the Olympic Peninsula to Neah Bay and District 4 is Forks to Tumwater down to Vancouver. These districts will all remain as is. There were 6 districts as late as of the 1980’s with Seattle and Tacoma proper being their own districts for a total of 6 in Western Washington but were rolled into district 2 and 3.

The new districts will combine the current District 5 and 6 as District 5 and the current Districts 7,8 and 9 will merge into the new District 6. So geographically, District 5 is the Northern to Southern borders through the middle part of the state and the new District 6 will border the north to the south and all along the eastern border. The new re-districting is set to go into effect during the next re-classification cycle on 2024-25.

WIAA Executive Director Mick Hoffman says the change will help each current district combine resources and save money on overall operations while expanding each of those districts to include classifications from 4A to 1B which is not currently the case. Hoffman also pointed out that Eastern Washington will not lose any representatives or representation. He says the current reps will be expanded into District 5 and 6 so there will be no loss in voting and the rep assembly will remain as it is now with a total of 53 members.

The other most notable action was the down vote on expanding the basketball regular season by 2 games. A version of this amendment has been proposed for several years and last year came within 1 vote of getting passed. The amendment would have allowed an additional 3 games and a 4th game against a visiting international team every 3 years. It would have increased the number of quarters allowed to each student-athlete from 80 quarters a year to 92 or a total of 3 additional games.

The quarters are for regular season only and any overtime in a game is counted as part of the 4th quarter of the game. There is no limit of quarters played for the post-season.

Many thought with the amendment after a few tweaks to make it more acceptable to some who opposed it in the last vote would get it over the hump this year especially after it failed by just 1 vote last year. Instead, the measure lost ground missing by 5 votes. There are many issues at play that likely played a role in the no vote including tighter athletic budgets, fewer people to work games such as ticket takers and other logistical support to more serious issues such as the real problem of lack of officials and school bus drivers. Games are already having to be re-scheduled and shifted around to make sure each game has officials or a visiting team can get to their location.

The other failed amendment was much less controversial and that was a proposal to add 2 games to the baseball and fastpitch regular season. Perhaps the fact that some schools couldn’t even get in their 20 game schedule this season this year due to the weather along with the pitching rules making it difficult to play several games in a row the measure wasn’t even close losing 33-2.

The other 3 proposals that passed included an amendment to limit how voting members of the association can vote by eliminating the “no position” option. All measures will now be voted either in the affirmative in support or in the negative as opposed. The vote itself also set some WIAA history as the final vote tally was 50 in support, 2 opposed and 1 no position. So the one vote was the final no position vote in WIAA history and was on the amendment to eliminate the no position vote. We say well done to the 1 voter!

The other 2 amendments were a couple of minor eligibility clean-ups with one that allows students to retain the full number of practices previously completed upon return from an extended absence. And the other allows a student to be placed on academic probation at the start of the fall sport season if they failed to meet grade requirements in the second semester or third trimester of the previous school year.

The 7th amendment that would have made Chess an official WIAA activity was withdrawn by the proposer.