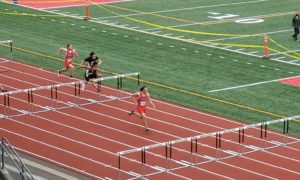 Link to Watch Live on ESN and the NFHS

It has been a rough Spring especially for Baseball, Fastpitch and Tennis with all the rain-snow-hail-outs and even though it’s not the greatest of conditions at least Soccer, Golf and Track can power through and get their events completed. This includes Saturday’s 62nd edition of the historic Shelton Invitational. The Shelton Invite has been one of the key preparation Invitationals for the State meet for decades.

This year 56 teams from 4A-1B will compete against each other in all the traditional State events. There will also be two special extra races for sophomores and freshmen only in the 100m and 1600m for both boys and girls.

This meet features several top state performers along with a National leader in the Discus. Rainier High School’s Jeremiah Nubbe leads the nation in all classifications with a throw of 205′ 2 exactly 1-foot longer than Brett Schwartz’s throw from Kansas. His toss is the 2nd best in state history. Then yesterday he topped himself pushing the best throw in the nation to 207′ 2 extending his lead in the national ranks and more important to Nubbe setting a new state record moving to the top of the list by 2 inches over the throw from West Valley of Spokane’s Vinnie Pecht who set the record back in 1997.

Nubbe also leads the nation in a 2nd event the Hammer Throw with a mammoth toss of 234′ or 21-feet further than the 2nd best throw in the nation. Nubbe also throws the shot put and javelin but those are not his focus and does it to help his team pick up team points in competition. Currently he the 3rd best shot putter in all classifications in the state with a best put of 55′ 3 behind Hermiston’s Caden Hottman at 56′ and Yelm’s Brayden Platt at 55′ 10.5.

Nubbe has committed to going to college to the University of Texas. We had a chance to talk with Jeremiah on Wednesday prior to him setting the State record on Thursday. Check out his interview below.

The Shelton Invite has other top State performers slated to compete. Silas High School’s Jaylen McCabe has the 9th fastest 100m and Charles McQueen is #10 with just 1/100th of a second separating the 2 and both just 2/10ths off the top time. Olympia’s Ethan Coleman has the top time in both the 3200  at 8:51.09 and 7th best in the 1600. Klahowya’s Kelton Gagnon is 10th in the state about 4 seconds behind Coleman’s time and Gagnon is 5th in the 3200 about 9 seconds behind Coleman.

In the field events beginning with the throws it’s Yelm’s Platt and Rainier’s Nubbe heading the shot put at 2nd and 3rd in the state. Nubbe leads everyone in the discus and Forks’ Sloan Tumaua is 5th best. Platt has the 4th best effort in the Javelin at 192′ 1 and Roderick Schenk from Central Kitsap is 7th with a toss of 181′ 7.

In the jumps, Naselle’s Trenton Stephens is tied for 5th at 6’4, Yelm’s Jordan Lasher has the 10th best pole vault at 13′ 6, Jonah Tongco from Kentridge has a 22’05 leap in the long jump for 5th best and Ronquillo is tied for 10th at 21′ 9. And in the triple jump Kael Probst from Gig Harbor is 2nd at 44′ 10, in 6th is Makhi Odoms from Tumwater and Rainier’s Chase McFarland just behind in 7th.

The girls competition is going to be just as fiery with many top state performers lined up to do battle. Bellevue’s Alex Buck comes in with the 2nd fastest 100m in a time of 11.91. Ava Jones of Tumwater is 9th best at 12.38 and Destinee Robertson 10th at 12.47. Buck is also 2nd fastest in the 200m with a 25.19 time. In the 800m Sequim’s Riley Pyeatt is 3rd in the state with Olympia’s Kartelyn Rigg just behind in 4th. Two 4×200 top 10 relay teams are in from Bellevue with the 6th best time and Graham-Kapowsin with the 10th best.

The field events will also be a battle with the #2 best shot putter in the state, Tyara Straka from Hoquiam in with a 45′ toss and Kentridge’s Saydi Orange from Kentridge with the 9th best toss of 39′. Both are also in the discus with Straka again the 2nd best and Orange 9th but Orange’s best event is the javelin where she is 3rd with a throw of 139′ 4. Tumwater’s Natalie Sumrok is 6th at 130′ 6.

In the jumps, Sequim’s Jolene Vaara and Central Kitsap’s Savannah Fourier are both tied in 4th place with a jump of 5’4. Hailey Perrine of Spanaway Lake is 3rd in the Long Jump at 18’7 and Tumwater’s Alyssa Duncan right behind in 4th at 18’4.25. Duncan is in front of Perrine in the triple jump currently 3rd best and Perrine in 9th.

The 62nd Shelton Invitational is set to be a huge spring-board to the State meets and the running events begin at 12:40 while the field events start at 1pm. ESN is on the air at 12:30pm.