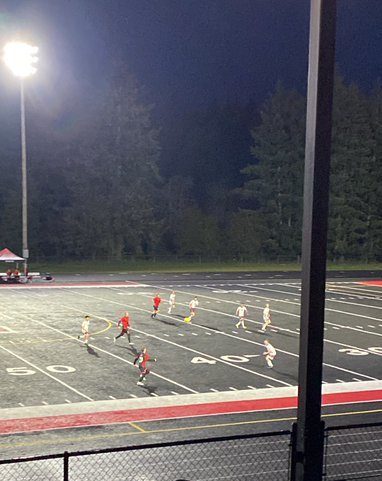 (Tenino, WA) Neither the Montesano Bulldogs or the Tenino Beavers had taken the field for an actual match in two weeks. On Wednesday night, both teams had to shake off the rust on a very frigid night with 2nd place in the 1A Evergreen conference on the line. In the end, it was depth that turned out to be the difference maker in the Montesano 2-1 win.

The first half was split about 50-50 in terms of time of possession. Both teams had opportunities but both defenses did a good job of not allowing too many shots. Montesano goalie Jayden McElravy kept a clean first half for the Bulldogs while Tenino keeper Alex Reichelderfer also made some impressive saves. The lone first half goal came off the foot of Jiovanny Torres in the 16th minute to give Montesano the 1-0 halftime lead.

Jiovanny Torres Puts Montesano on the Board

To start the second half, Montesano dominated time of possession for the first 15 minutes. They weren’t able to find a second goal due to some hand balls on the attacking end. Tenino then woke up and started getting some pressure, but McElravy was up to the challenge and kept a clean sheet. That was until the 72nd minute when Tyler Minerich squeaked a shot by the Bulldog keeper to even it up at 1-1.

Tenino Gets the Late Equalizer

Montesano would answer immediately. In the 73rd minute, Felix Romero gave Montesano back the lead 2-1 and the Bulldogs hung on for a tough win.

Montesano moves to 6-1 on the season and 5-1 in league play while Tenino drops to 5-4 overall and 4-3 in league play. Our Pacific Sports Spa visiting team MVP for Montesano went to Jayden McElravy and our Thorebecks home team MVP for Tenino was Tyler Minerich.

For a complete scoring summary and wrap-up you can view the ESN Post Game show below.

The ESN Post Game show for a complete wrap-up