WIAA State Dance and Drill: Saturday 3A, 2A, 1A Schools

Interlake pulled off quite a feat in sweeping the top 3 positions in the Drill Down. Seanna Qin outdueled her teammates and everyone else for the Championship while Raashi Ramanan was 2nd and Miranda Wang took 3rd.

In the competitions only 1 team took home 2 Championships and that was Hermiston. They began with a tremendous performance in the Show category knocking out 3 other spectacular performances. The Bulldogs also won the the 3A/2A Dance competition. Bonney Lake took home the most hardware though with a win, a 2nd and a 3rd place showing. The Panthers won the 3A/2A/1A Kick competition while placing 2nd in 3A Military and 3rd in the 3A Pom category.

Teams that took home 2 trophies included Othello that won the 2A Hip Hop and just missed a 2nd Championship taking 2nd in 2A/1A Pom. Lake Washington was also close top being a double winner taking the Title in the 3A Military category and the runner-up in 3A Pom. Capital was a Champion and a 3rd place finisher taking home the big trophy in 3A Pom and settling for 3rd in 3A/2A Dance.

Teams that won just 1 trophy but it was a Championship went to Gig Harbor who captured the 3A Hip Hop, Royal won the 2A/1A Military category and Selah took home the top award in 2A/1a Pom.

Only 1 team won 2 trophies without getting a Title, Tumwater placed 2nd in 3A/2A Dance and 2A Hip Hop. Teams that did not place 1st but took home hardware included Shorewood with a 2nd place in 3A Hip Hop, Prairie taking 3rd in 3A Hip Hop and Roosevelt with the 4th place finish in 3A Hip Hop. Shelton was 2nd in 2A/1A Military, Interlake finished 3rd in 3A Military, Sehome was 3rd 2A/1A Pom and Hazen grabbed the 4th place trophy in 3A Pom.

Other awards handed out include 3 scholarships from the WSDDCA. The top award was a $1,500 scholarship that went to Serena Yin from Interlake. The $1,000 scholarship went to Bonney Lake’s Dylan Lanz and the $500 award was earned by Lauren Damon from Bellingham High School. 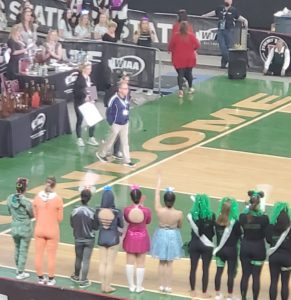 One other accolade was handed out and that was to the only P-A announcer the event has ever known, Adolfo Capastany. This was Capastany’s 25th year and was his final year of doing it. Capastany was credited with the idea of the parade of teams which has grown into the signature piece to the Dance and Drill event. Judges, Coaches and friends swarmed Capastany as he received a special award for his longtime service.

Below are the results of each category:

3A/2A Dance
The Hermiston Bulldogs were the only team on Saturday to win 2 Championships and in Dance they were the best of 10 teams. Tumwater finished 2nd and Capital took the 3rd place trophy.

2A Hip Hop
7 teams lined up to compete for the 2A Hip Hop trophy and it was Othello coming away with the win. Tumwater picked up their second, runner up finish of the competition.

3A Hip Hop
Gig Harbor stood out as the top performing team in a crowded 3A Hip Hop group of 14 teams. Shorewood would finish 2nd, Prairie 3rd and Roosevelt was 4th place. This was the only trophy for all 4 teams in this competition.

3A/2A/1A Kick
Only 4 teams participated in this category and Bonney Lake shined the brightest. This was one of 3 trophies won by the Panthers, the only team to earn 3 trophies and they added a 2nd and 3rd as well.

2A/1A Military
Royal rose to the top of the 6 teams competing. It was Royal’s lone trophy and they made it count bigtime. The Shelton Highclimbers also grabbed their lone trophy taking 2nd place.

3A Military
9 teams were set to battle for the top 3 positions and this one went to Lake Washington. This was the Kangaroos best finish while also taking a 2nd place in Pom. Lake Washington’s victory kept Bonney Lake from getting their 2nd Championship as the Panthers settled  for 2nd place. Interlake scored their lone trophy placing 3rd.

2A/1A Pom
Selah scored their Championship besting the other 10 teams to tab their lone trophy. Othello was next with a 2nd place finish and 3rd place went to Sehome and was the Mariners lone trophy win.

3A Pom
The Capital Cougars truly battled to earn this win. During the routine one of the Cougar team members injured her leg but she gutted her way through the entire routine and finished then had to be helped off. The judges did not let the injury determine their outcome and Capital won the Championship.

Show
Hermiston outdueled a strong group of Show category contestants. Hermiston presented a program on the Garden of Eden which won over the judges enough to tab the win. Kentlake had a strong showing with their impression of Alice in Wonderland, Rogers (Spokane) had a fun and up-tempo program based on Willy Wonka and the Chocolate Factory while Shorewood’s Flag Team performed a fun piece to Mario Cart.