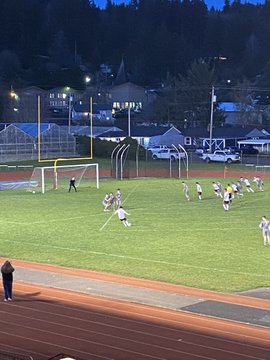 (Chehalis, WA) The most unpredictable sporting events are rivalry games. Anything can happen no matter the records or location. That proved to be true when Centralia traveled to Chehalis to take on the Bearcats. We did learn however that this Centralia team is going to give every team troubles all season long.

WF West controlled possession for a wide majority of the first half. The Bearcats had many opportunities but could find the back of the net despite putting consistent pressure on Centralia goalie Carlos Hernandez. The senior kept a clean sheet until the 40th minute when Gideon Priest finally put the Bearcats on the board to make it 1-0 at halftime.

Bearcats Strike Late in First Half

The Tigers came out of halftime with some fire. They started controlling possession in the second half and put pressure on the Bearcat defense. The strength of this WF West team is defense however and they held up. Centralia continued to threaten but could not find the equalizer in the first 20 minutes of the second half.

That changed as the Tigers got their first corner kick in the 64th minute. After the ball deflected off of one Tiger, Didi Paz Gamez would swing his left leg and drill the ball right into the back of the net. Gamez gave the Tigers the equalizer as well as a lot of momentum and energy.

Neither team would break the tie in regulation despite both teams having opportunities. We then headed to overtime.

In the first five minute OT period, Centralia dominated possession. The Tigers look to pressure the Bearcats and force a mistake to win it. However, the WF West defense held up and sent the match into a second OT period. This one was more even with neither team getting a real good look at goal until the Bearcats had a few opportunities in the last couple of minutes. Once again the Centralia defense held and sent the match to a penalty kick shootout.

It was Hayden Sciera of WF West and Carlos Hernandez of Centralia as the goalies for their respective teams. After both teams hit their first shot, Hayden Sciera would come up with a massive save in round two to give the Bearcats the advantage. Nobody would miss in the next six shots and it came down to the final shot for WF West. Cameron Kunz would then put one perfectly in the bottom left corner and the Bearcats would win the shootout 5-4 and take the match 2-1 over Centralia.

Centralia drops to 0-5 and 0-2 in league play and will look for their first win on Tuesday as they host Black Hills. WF West moves to 4-1 and 3-0 in league play as they travel to Tumwater on Tuesday night for a match you can catch here on ESN. Our Pacific Sports Spa Visiting Team MVP for the Tigers was Carlos Hernandez and our Thorbeckes Home Team MVP for the Bearcats was Hayden Sciera.