(Tacoma, WA) For the first time since 2020, we got to have the WIAA Girls State Bowling Tournament. Narrows Plaza hosted the three day event February 3rd-5th. While it was good to get back to the state tournament, there were a few changes that made this edition unique.

Each classification had their entire competition in one day. It started with the largest day in terms of bowlers on Thursday with the 3A competition. The 1A and 2A combined for their portion on Friday and the 4A tournament capped off the week on Saturday.

The first four team games were played as regular games. Each team had five bowlers and each of those bowlers bowled their own individual game. Those games counted for each player’s individual portion of the competition. They also added all the scores together for the team portion of the tournament.

Individual bowlers also got four games and added their scores for each of those games together to conclude the individual portion. The highest total score won the individual title.

For the second portion of the team competition, teams participated in 10 baker games. In a baker game, each of the five bowlers on a team bowl two frames and the team bowls one game as a whole. After 10 baker games, the scores were added onto the four regular games and the highest score won the state title. 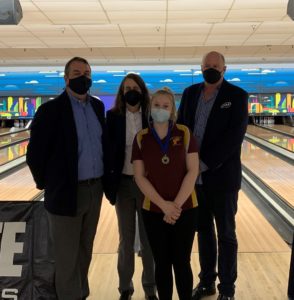