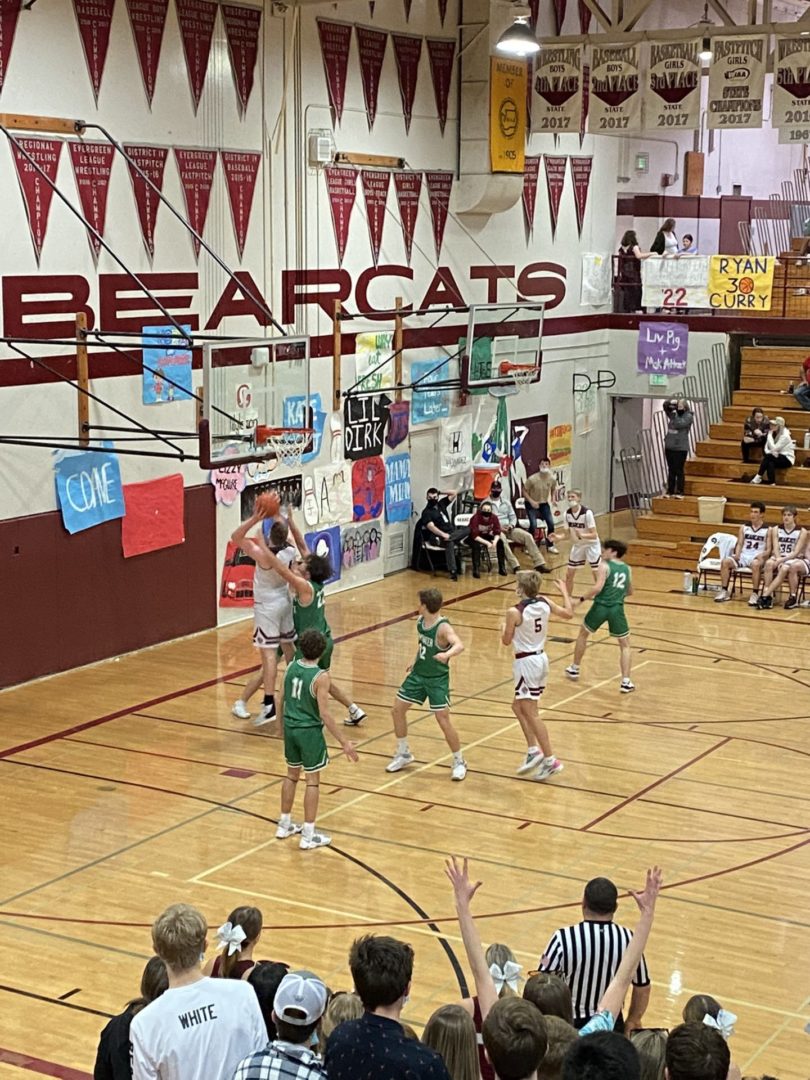 (Chehalis, WA) One night after a thrilling victory over North Thurston, the WF West Bearcats had another massive challenge standing in their way. When the final buzzer sounded, the Bearcats got their biggest win of the season knocking off the top team in the Evergreen 2A conference, Tumwater Thunderbirds.

The game was back and forth the entire first half. Tumwater ran into some early foul trouble as Andrew Collins and Ryan Otton picked up two fouls in the first quarter and sat for the rest of the half. Luke Brewer also sat for much of the first half in foul trouble, but the Thunderbird defense played extremely well. They limited the Bearcat offense and held them to just 24 points in the first half. Tumwater struggled on offense with three starters on the bench, and the Bearcats held the 24-21 lead at halftime.

WF West would then get off to a hot start in the 2nd half to build up a comfortable lead. The lead quickly diminished as Luke Brewer caught fire and knocked down some big three pointers to bring Tumwater back. Adam Overbay also got going offensively and the return of Ryan Otton limited the Bearcats offensive production. Headed into the 4th quarter, WF West still clung to a 39-34 lead thanks to a big three by Gage Brumfield.

In the 4th quarter, all eyes were on the battle down low between WF West’s Soren Dalan and Tumwater’s Ryan Otton as they both had some foul trouble. Dalan had 4 fouls while Otton had 3 and both played very smart defense to avoid picking up any more. Luke Brewer continued his great game as he gave Tumwater the lead with a late three to put the pressure on the Bearcats. The pressure was handled immediately as Seth Hoff drained a three of his own to give the Bearcats back the lead with under a minute to go.

Tumwater trailed by 3 with under 10 seconds to play and had a chance to tie things up. Connor Hopkins took a three for the tie and was fouled, giving him three free throws. After hitting the first, Hopkins missed the second and then purposely missed the third to give Tumwater the chance to get the offensive rebound. WF West would get the board and head to the line for a one and one.

Soren Dalan would miss the front end and Tumwater tried a long full court pass out of the timeout, but the ball sailed out of play. WF West would then take a 3 point lead into the final second when Luke Reid threw up a full court heave that would hit off the front of the rim to solidify the Bearcat victory in another epic showdown.

The Bearcats moved to 7-6 and 4-2 in EvCo 2A play and get a day off Wednesday before a showdown for 2nd place in the conference with Black Hills on Thursday. Tumwater drops to 12-3 and 7-1 in league play and look to bounce back on Thursday against Centralia. Our visiting team MVP for Tumwater went to Luke Brewer and our home team MVP for WF West was Seth Hoff.