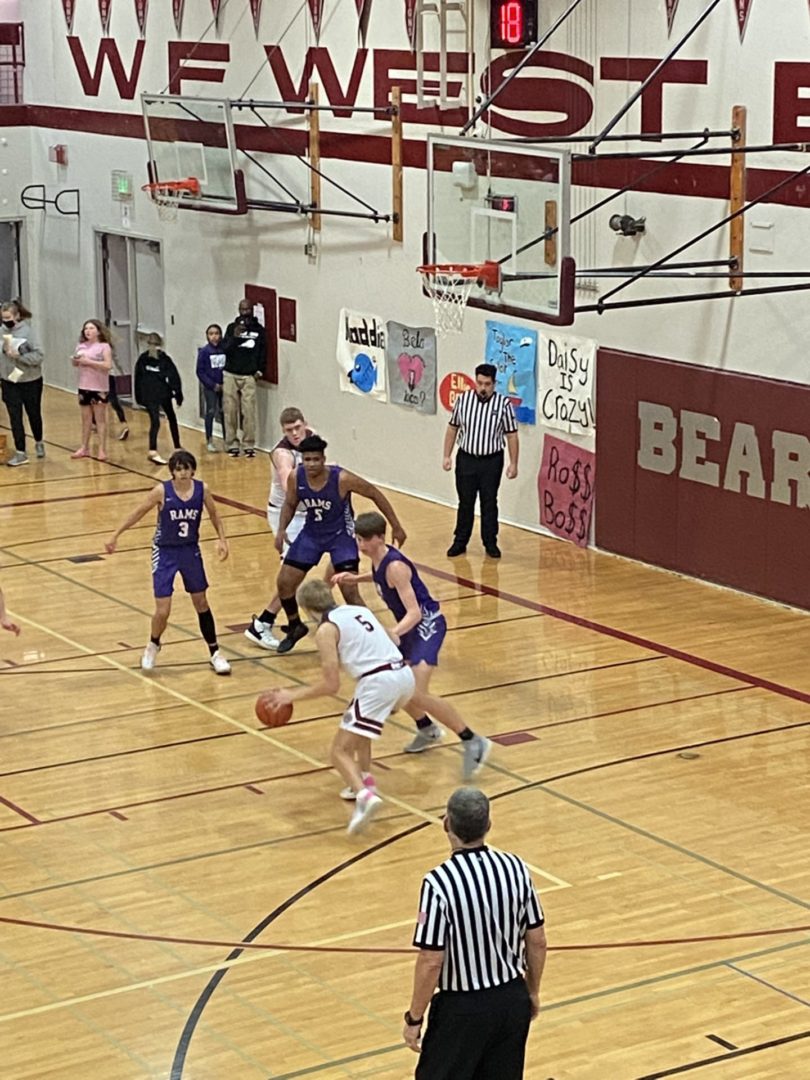 (Chehalis, WA) After a dominant first half, WF West looked like they were going to roll against the North Thurston Rams on Monday night. The Rams showed they had plenty of fight still in them and cut the Bearcats lead down to three before falling just short of the comeback win as WF West hung on to the 68-64 win.

Early on in the game, WF West dominated on both ends of the court thanks in part to 6’10” Junior Soren Dalan. The big man had 14 points in the first half and already added another double-double to his impressive season. The Bearcats were cashing in on their open jump shots but even when they missed, Dalan pulled down the offensive rebounds and added on some easy points. It was the same story for Dalan in the 3rd quarter.

The Rams were not going to go down without a fight however. After a tough first half on the offensive end, both Micah Anderson and Thad Tenkley started to find their rhythm on offense and put some pressure on the Bearcats. Anderson had 12 points in the 3rd quarter while Tenkley added 7 including a big three that brought the Rams to within three.

Neither team could really capture the momentum to start the 4th quarter. Both teams traded baskets back and forth as WF West kept North Thurston at arm’s length to protect their lead. After not seeing many fouls in the first half on either side, both teams upped the aggression which created some foul issues and turnovers in the 4th quarter.

Then, the Bearcats finally managed to seize control of the game. After missing a dunk earlier in the game, Senior Dirk Plakinger got the ball off an inbounds play and rose up and threw down a candidate for dunk of the year over the North Thurston post. The crowd was right back into it and the team was re-energized.

North Thurston would not stay down for long though. Freshman Micah Anderson kept the Rams right in it with a big time answer on a beautiful move down low.

The Bearcats struggled making their free throws down the stretch which could have been because of a 10 day layoff before this game. The defense kept things on track and another turnover and breakaway dunk from Plakinger put the icing on the cake for the Bearcats.

The Bearcats went up by two possessions in the final moments thanks to free throws from Evan Tornow which sealed the victory for WF West.

WF West moved back to .500 at 6-6 as they get back to league play on Tuesday at home against Tumwater. North Thurston drops to 4-9 after the Non-League loss and will be back in action on Wednesday at Timberline. Our visiting team MVP for the Rams was Micah Anderson who finished with 25 points and 23 of them coming in the 2nd half. Our home team MVP went to Dirk Plakinger who finished with a game high 27 points for the Bearcats.