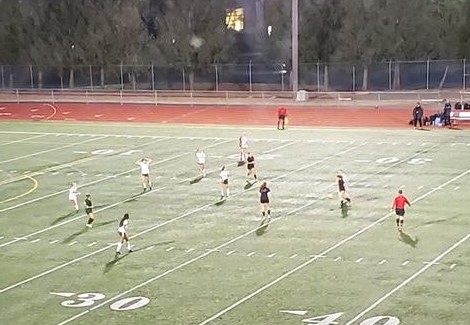 There were 2 broadcasts on the Eli Sports Network Thursday night although we began with 3 on the schedule but due to wifi and connectivity issues at Memorial Stadium we did not get the Lincoln (Sea) at Garfield match at Memorial Stadium on the air and for that we apologize but sometimes conditions are just beyond our control. Our coverage, post-game shows and video highlights of our other 2 matches are below. 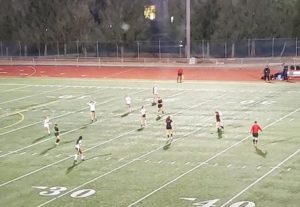 The score certainly is more lopsided than how the match played out. The Emerald Ridge Jaguars came into the match 0-2 and being outscored 15-0 losing an 8-0 and a 7-0 match. When Curtis’s Katie Riggins fired in a beautiful shot from the right side just outside the box in just the 3rd minute it could of been a “here we go again” moment for the Jags but instead they dug in and held the Vikings for the rest of the half. Great back line work for Emerald Ridge led by Lexie Padilla and keeper Olivia Cano held the Vikings at bay. The Jags also had some deep runs into Curtis territory with attacks led by Savanna Savage and Alyce Shapele but they were unable to find that 1st goal of the season to tie the match.

Curtis also had some great defensive play including keeper Shaliyah Dupar who pitched the shut out in goal and back liner Jayden Jones was brilliant clearing many chances from the Jaguars. After being held to just the 1 goal the Vikings were set on getting that insurance goal early in the 2nd half and although had a few shots in the first 5 minutes they would finally get it on a rebounded shot that ended up right in front of Riggins who easily popped it in the net for a 2-0 lead in the 54th minute.

Emerald Ridge again dug in and denied Curtis several opportunities as the Vikings applied even more offensive pressure. Finally in the 75th minute the Vikings hit goal #3 off the foot of Noelle Lordahl. The Vikings would punch 2 more goals in in stoppage time to make it the final 5-0. It was a strong finish for Curtis who were a bit frustrated by some missed opportunities to blow open the match earlier and should help build momentum as they get into the heart of the SPSL 4A league. They improved to 2-1-1 and will travel to rogers next Tuesday. Emerald Ridge dropped to 0-3 and will look for their 1st win next Tuesday when they host Bellarmine Prep.

Our MVP’s of the match were Curtis’s Katie Riggins and the Jaguars Lexie Padilla. Below is a link to our post game re-cap and video highlights. 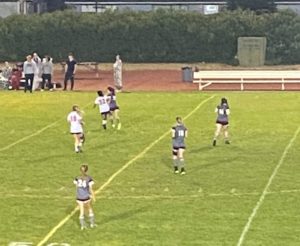 WF West handled their business in this crosstown rivalry on the natural turf at Bearcat Stadium. The Cats got to work in the 1st half and scored in the 11th when Maddy Casper hit a line shot to the left side of the net from the top of the box and it was 1-0. The Cats would strike again in the 15th minute this time a perfect shot from Kaylynne Dowling to push their lead to 2-0 and that is how it would go to the half.

WF West would then put the match away in the 2nd half scoring 3 times twice from Cameron Sheets who took control of the ball just across midfield and pushed it down to a one on one and fired it into the back of the net for a 3-0 lead in the 46th. 8 minutes later Sheets struck again and put the game out of reach making it 4-0. There was more goal to be made and in the 60th Lena Fragner had the capper for the final 5-0 win after a beautiful deep throw in from the side from Elizabeth Patana. Carlie Deskins got the shut out in goal for WF West.

The Bearcats improve to 2-2 on the season and 1-1 in EVCO 2A play and will host Tumwater next Tuesday. Centralia dropped to 0-4 for the season and they travel to Black Hills on Tuesday. The Thorbeckes home team MVP went to WF West’s Kaylynne Dowling and the Pacific Sports Spa visiting player of the game was Centralia’s Hannah Robbins. Below is our Awards West Printwares post-game show link and a few video highlights.