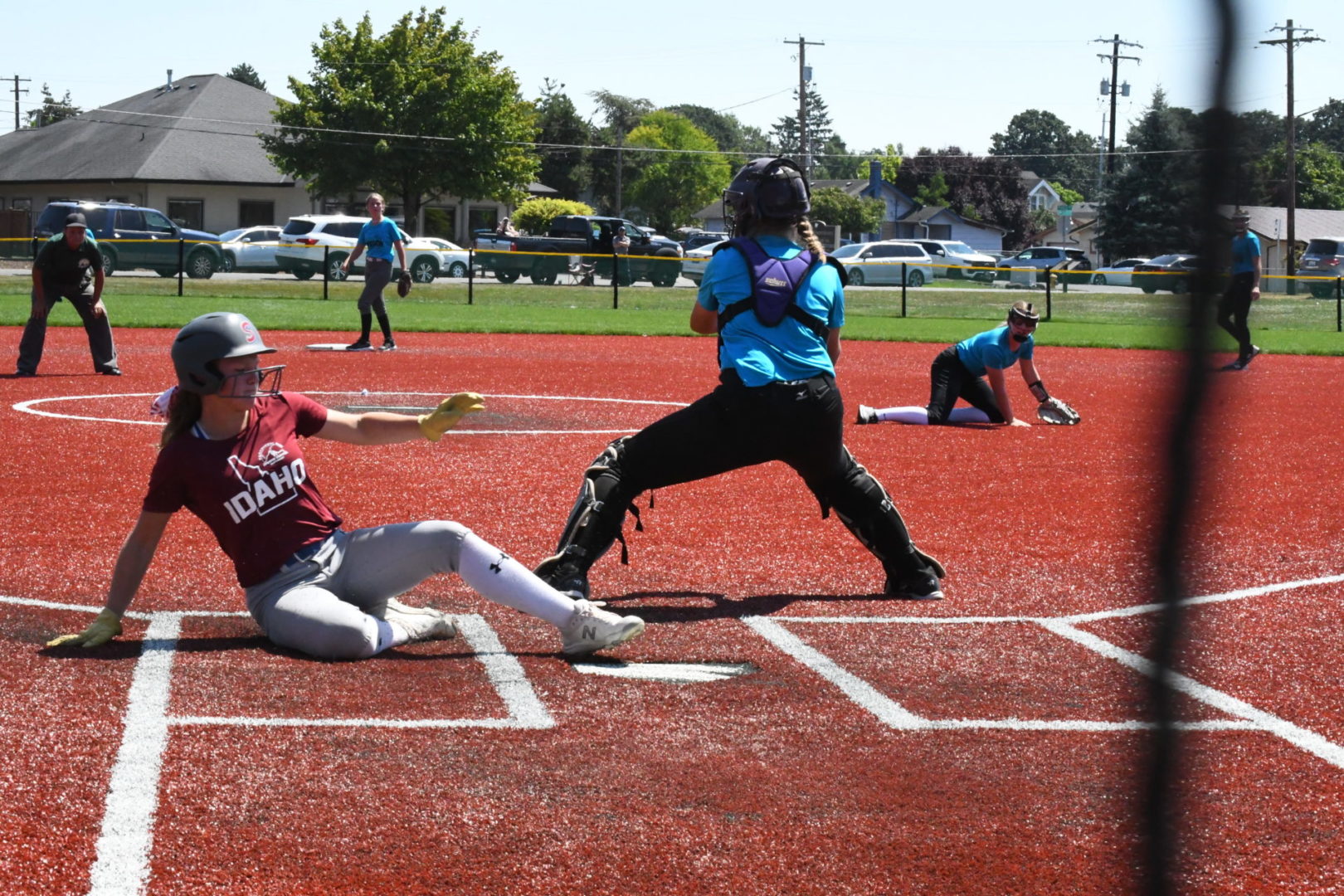 Pacific blew up in the 1st inning scoring 7 runs and it began right at the top of the order with a lead-off single from Isabella Lauerman. Peyton Daggett and Joselyn Dodds then both singled with Dodds picking an RBI. That was followed by a walk and then 2 singles from Shayla Stewart and Drewsey Williams. Marti Anderson would finish the scoring with a 3 run blast and Pacific was off and running with a 7-0 lead.

Pacific punched up another 4 runs in the 3rd. Stewart got plunked followed by an error put 2 runners on. Kadence Morrison then hit into a fielder’s choice scoring a run. Breelyn Garcia then singled followed by Marti Anderson belting an RBI double and Chloe Reams finished off the scoring knocking in 2 runs with a single.

Crimson would cut into that lead over the next 2 innings outscoring Pacific 2-1 to make it 12-11, Breelyn Garcia smacked a 2-out double and scored for Pacific while Emily Hanchey got on by an error and scored off an RBI double by Addisyn Clark. Clark then advanced top 3rd and scored on a sacrifice from Laney Morgan.

Pacific put the game away in the 6th tabbing 4 runs which was led off with a double from Lauren Glasser followed by a walk and then she scored on a base hit from Joselyn Dodds. Kendall Murphy then got on via fielder’s choice and both scored on a 2 RBI double off the bat of Drewsey Williams to push their lead to 16-11.

Crimson got something going immediately with a lead off double by Danica Quinn who then scored when Gracie Nelson smashed a 1-out 3 bagger. Nelson stole home to make it 16-13 but that is where the rally ended.

Team Ruby exploded out of the gate building an insurmountable 9-0 lead in the 1st 4 innings before Royal goth their bats going in the 5th. After a walk a fielder’s choice, a hit by pitch and a 2nd out Megan High Fill slapped an RBI single and a 2-out rally wass on. Daniella Ambriz then double in 2 runs followed by an RBI single from Danielle Sitts and another RBI single by Emma Allen and a quick 5-0 lead.

2 more runs were added in both the 2nd and 3rd innings. In the 2nd Ruby took advantage of a walk, fielding errors and stolen bases. Reece Bybee walked and stole 2nd and then moved to 3rd on an error when the 3rd baseman could not handle a hot shot down the foul line from Jenna Ambrose. Ambrose then stole 2nd. McKenna Sutton then picked up an RBI on a ground-out to short that scored Bybee and moved Ambrose to 3rd. Ambrose then scored on a ground out to 2nd and Kalae Thompson got the RBI. In the 3rd High Fill singled along with Sitts and with 2 outs both scored on Kayli Clark’s base hit and that built the 9-0 lead.

Neither team would score in the 4th but Royal had their best offensive inning scoring 5. Morgan Voll started it with a single followed by a walk to Clara Woolsey. Savannah Watterson then Ella Sams knocked in 2 with a double. Aliyah Gaffke and Morgan Pierce smacked a double. The scoring frenzy would end with Carlee Strand’s RBI double and 5 were in the book as Royal closed to within 4 down 9-5.

Ruby wanted extra insurance and to push their lead past a one swing grand slam that could tie it and put up another 3 runs in the bottom of 5. Masyn Mogel got on with a 1 out single followed by a walk and then an RBI single from Ambriz, her 3rd of the game. Sitts singled to load the bases and Allen came through with her 2nd and 3rd RBI with a double and Ruby was back up by 7.

With time running out the 6th would be the end of the game and Royal made a run but could only push across 2 runs for the final 12-7 score. Halle Parsons got on by an error and Morgan Voll doubled and both would score.

Sitts and McKenna Sutton pitched 4 shut out innings from the circle to lead the pitching effort.