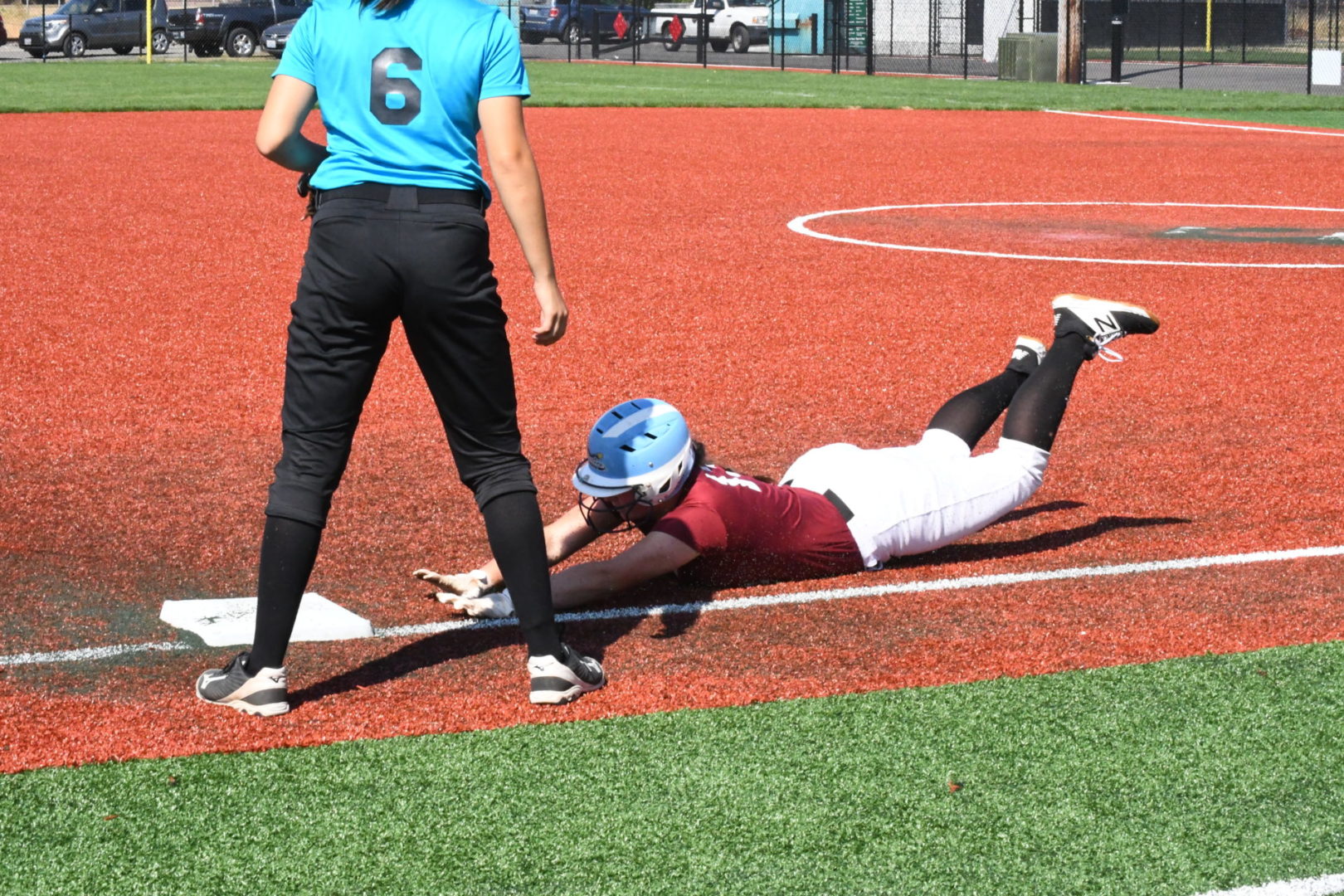 Lime got off to a fast start scoring 4 in the 1st when Pravina Blunk walked then scored on a double by Sierra Anderson. Anderson then scored when Treja Patterson doubled. Patterson scored when Raychel Squibb belted one over the fence for the 4-0 lead. Lime added 5 in the 3rd with consistent hitting of 3 singles in a row from Patterson, Relethford and Squibb. Lime would score another 3 in the 4th and 5 more in the 5th. Patterson added a home run of her own, Anderson had a double and singles from Blunk, Brielle Etter, Grace Tanferani, Beth Bowen, Naomi Chavez and Maleena Blunk.

Team Granite took another one on the chin and it is important and fair to point out they were the only team to play the entire tournament with just 9 players. They only had 2 pitchers and no subs as they had late scratches from their team who could not attend. Normally, the late scratches end up being spread over several teams so its not as impactful but this time it all fell on team Granite. Hats off to the girls who battled in each game for team Granite.

Their 2 runs were scored in the 4th inning when Hadlee Benjamin singled followed by Regan Rose. Reagan Graham sacrificed the runners over and were picked up when Cayla Richmond drilled a 2 run double. Ellese Cottrell also singled in for the Granite team.

Pacific struck 1st with 3 in the 2nd inning. Lola Jarrette singled and then scored on an RBI double by Tayha DeGrande. Hope King then doubled and with runners on 2nd and 3rd, DeGrande scored on Maddalyn Fullenwider sac fly. Samantha Wilks then singled in King for the 3-0 lead.

Crimson would answer in the 3rd inning and take the lead. With 1 out, Grace Diffin singled and scored when Grace Hein doubled. After a walk and a ground out Clarissa Howard slapped an RBI single. Howard would score the 4th and go-ahead run on an RBI base hit from Analisa Zamora for the 4-3 lead.

Pacific battled right back in the 4th scoring twice as Jarrette and DeGrande put together back-to-back singles and Hope King brought them both home with a 2 RBI single and Pacific was up 5-4. Crimson answered immediately with a run in the bottom half of the inning Madyson Arellano led off with a base hit and then scored on a double by Grace Diffin, her 3rd hit of the game and after 4 it was all even.

Pacific threatened in the 6th with runners on 1st and 2nd with no outs when Jarrette ripped a line-shot to the Crimson 2nd baseman who caught the ball, tagged 2nd to get the runner who was off and running at the crack of the bat then checked 1st to see the runner off the bag and threw it to 1st for the rare defensive gem of a triple play.

Pacific would grab the lead in the 7th when Allyson Nordling singled and would come around with the go-ahead run on an RBI base hit from Samantha Wilks. Elin Williams led off the bottom of the 7th with a walk. Diffin then ripped a double putting runners on 2nd and 3rd with no outs. Pacific pitcher Allyson Nordling then got a strike out for the 1st out. Aubrey Gibbons then grounded out scoring Williams to tie the game but Nordling would not allow a walk-off win for Crimson and struck out the next batter to end the game.

After a brief discussion, it was decided to leave the game as a tie, frankly to the delight of both teams and both squads cheered and congratulated each other in a great display of sportsmanship.

Ruby was ready to hit when they got her early on Wednesday morning and got right to it with 5 in the 1st. Mckinley Hill had a 1 out single and then another ground out. This kick-started an 5 batter 2-out rally. Sierra Escalera singled and knocked in Hill. Marae Holloway then singled and with 2 on Pacia Burrup connected with an RBI single. Marissa Mauger then sent one deep as the ball exploded off her bat and over the outfield fence for a 3 run cleaning of the bases and a 5-0 lead.

5 more would cross the plate in the 2nd with Harley See leading off with a single followed by a walk and a fielder’s choice. Hill would then double picking up 3 RBI. Stephanie Bryson would get on with a hit and Escalera would knock in 2 more with a single. Another run scored in the 4th with Reagan Rex with a 2 out single and Aubrey Fuchs pushing her around the bases with an RBI double. 4 runs scored in the 5th highlighted by yet another hot from Escalera who would also score, a single and RBI ffrom Mauger and a 2 run double by Jenna Kearns.

Ruby wrapped up their tournament with a 6 run 6th inning. There were 3 RBI doubles in the inning from Escalera, Holloway and Mauger. Escalera finished going 4-4 with 3 singles, a double and 5 RBI.

The game played and felt a lot closer than the final score as Steel left many scoring opportunities on the bags. They had 13 hitters outside of those who scored who reached base but did not score. Steel was just a couple of key hits away from being in this game.

Shay McDaniel tripled to lead off and scored on a fielder’s choice for 1 run in the 1st. Sami Flanagan led off the 2nd with a single and scored on a Cate Wheaton RBI base hit for their 2nd run of the game. In the 3rd Grace Copeland led off with a hit then a fielder’s choice on a Layna Weaver ground ball and both were safe. An error then loaded the base and Amaya Luna coaxed an RBI walk. Riley Wheaton then slapped an RBI single followed by a sac fly scoring a run from Ava McPhillips. Their final 2 runs came in the 4th inning as Cate Wheaton led off with a single and then scored on a 2 run blast from Jordyn Wurzer.

In a great game on field 4 these two teams battled to a push in the end. After the 4th inning Sky held a 4-3 advantage. Their runs came from a base hit by Olivia Dedmon who would score on an RBI double by Jasmine Barela for a 1-0 lead in the 1st. They added a run in the 2nd Shyanne Fenley grounded into a fielder’s choice and was safe on 1st. She would steal both 2nd and 3rd then scored on a ground ball. 2 runs scored in the 4th as Grace Neer led off with a triple and scored on a base hit by Ellie Martin. Martin then came in on an RBI triple from Fenley.

Emerald scored their 3 runs with 1 in the 2nd. Allison Heater led off with a double and scored on a ground out by Jaylene Manriquez. They added 2 more in the 4th with Brynn Pendleton drawing a 1 out walk and coming around to score. Heater doubled for the 2nd straight at bat and scored on an RBI double from Dakota Smith and Emerald trailed 4-3 after 4.

Both pushed in runners in the 5th with Emerald scoring in the top of the inning when Molly Embrey singled and Allison Murai knocked her in with a single to tie it up at 4’s. Sky grabbed a 2 run lead in the bottom of the frame when Rylie Huddleston hit a 1 out single and scored on a 2 out double by Ashley Allinger. Allinger then scored when Kinzy Bowen came through with a base hit and Sky was up 6-4.

Sky opened up in the 6th doubling up Emerald 8-4 with 2 more runs as Martin drew a walk followed by a base hit from Maddie Sheadel. Both would score on a 2 RBI base hit from Alyssa Kilbane and Sky was 3 outs away from the win heading into the top of the 7th.

Emerald had one last surge in them and Yuri Siler got things started with a lead-off single. Dakota Smith also singled but that was followed by 2 outs. Emerald hitters came through in the clutch as Molly Embrey drove in 2 with a double, Mya Michel matched that with an RBI double to pull within 1 run. Allison Murai then came through with the game tying hit, an RBI single.

Sky nearly came back with the winning run in the bottom of the 7th with back to back 2 out singles. Heater then got Martin to pop out to end the scoring threat and the game ended in a tie.