We had 3 boys soccer matches on the air Tuesday night and our re-caps, pictures and video highlights are all below.

(Tenino, WA) The Elma Eagles came in on a hot streak with a 4-0 Evco league record and 4-1-1 overall while scoring 34 goals and giving up only 3 and none in league play. They were in Tenino to face the Beavers for the 2nd time this season after blowing out the Beavs in week 1 7-0.

Tenino appeared to be a different team after an 0-2 start they were on a 3-0 victory run and wanted to prove they were not the team the Eagles rolled in the first match of the year.

The match didn’t begin like the Beavers were ready for a fight when an outside shot came in from the Eagles Canon Seaberg, a low roller that Tenino keeper Alex Reichelderfer came up to scoop when the ball took a little hop and bounced off Reichelderfer and right back to Seager who then re-directed the ball to the Eagles Gavin Blakett who had a wide open punch in shot and Elma took a 1-0 lead in less than 40-seconds into the match. 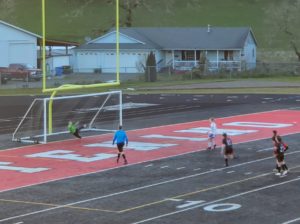 The Eagles would strike again in the 28th minute when the Eagles were attacking in the box and a penalty was called against the Beavers giving Elma a 2-0 lead heading into the break.

In the second half both teams would make runs but neither side could break through and the Eagles recorded the 5th league win to improve to 5-0. Elma had solid efforts frtom Canon Seaberg and Blakett along with Cason Seaberg, Manny Hernandez, Rene Duran, Rodrigo Luna and keeper Andy Salvatierra.

Tenino dropped to 3-3 on league play but certainly showed they had improved tremendously since the beginning of the year. Zach Byer, Toby Suess, Zack Russell and Reichelderfer led the Beavers effort.

(Chehalis, WA) It was a battle for 1st place in the Evco 2A at WF West in Chehalis. The T-Birds are consistently at the top of the standings while WF West has been traditionally one that has struggled but recently have begun to turn the program around.

This match would play-out in as dramatic fashion as you could pencil out on paper. WF West would break through quickly just 4 minutes in on a breakaway the Tumwater defense would get called for a foul in the box for tackling from behind setting up a PK which Carlos Hernandez connected for an early 1-0 lead.

It would not take long for Tumwater to answer when Chandler Stuart headed a deep lay-up pass into the net less than 2 minutes later. The early scoring flurry would be all there was to halftime and more.

The two teams stalemated from the 5th minute all the way to the 75th minute and then the craziness kicked in. The Bearcats would strike in the 75th minute to take the lead late in the match. Hernandez off a set piece laid up a long pass in front of the goal the defense and keeper came out to meet the ball but it rebounded out to Elvis Leal who then  popped it in for the go-ahead goal and a 2-1 lead.

With less than 5 minutes to play it was hang on time for the Bearcats but they could not do it as history repeated itself in this game with Tumwater answering a Bearcat goal in less than 2 minutes. Zachory Schmidt would fire a shot from outside the box to the left of the goal and scored the equalizer with 3 minutes to play in the match.

The T-Birds were not satisfied with just a tie and wanted the win and would score the game winner in stoppage time. Schmidt would take a deep pass and head toward where he just scored and belted a hard crossing pass where the Bearcat keeper came out but the ball bounced off him and Miles Lineker was there for the T-Birds and knocked in the winning goal.

Tumwater improves to 4-0 while WF West dropped to 3-1-1. The T-Birds will host the 2-2-2 Rochester Warriors on Friday while the Bearcats next play a non-league match at Capital on Thursday.

(Lakewood, WA) The PCL has the bookends of Wilson on top at 4-0-1 and Spanaway Lake in the cellar still looking for their first win and the there’s rest, 5 teams between 2-0-2 and 1-3 including both the Lincoln Abes and Lakes Lancers.

Lakes would strike first in this one when Daniel Kalysbekov took the ball along the near sideline and launched a deep cross to Ayden Murry. Murry then settled the ball while attacking the goal and fired it past the Abes keeper  Vasil Stefanov to the right for the goal in the 22nd minute.

This score would hold up to the break. It would only take 8 minutes for the Abes to find the equalizer when Javier Brambila took a deep volley downfield past a defender into a one on one and popped it past and into the back of the net to make it 1-1.

Lakes then blew a golden opportunity to take the lead with 17 minutes after the Abes are called for a hand ball in the box giving the Lancers a PK. But Stefanov  was up to the task and smothered the free shot denying the go ahead goal.

Lincoln then would complete the comeback win with less than 7 minutes to play when Amir Cazales would launch a massive shot from 30+ yards out into the back of the net and Lincoln would win the match 2-1.

Lincoln is now in 3rd place at 2-1-1 behind Stadium at 2-0-2. Lakes suffers their 2nd tight loss and drops to 2-2-0, tied with Bonney Lake for 4th place. Lincoln will turn around and now take on Stadium on Wednesday, Lakes returns to action Thursday when they host Mount Tahoma.