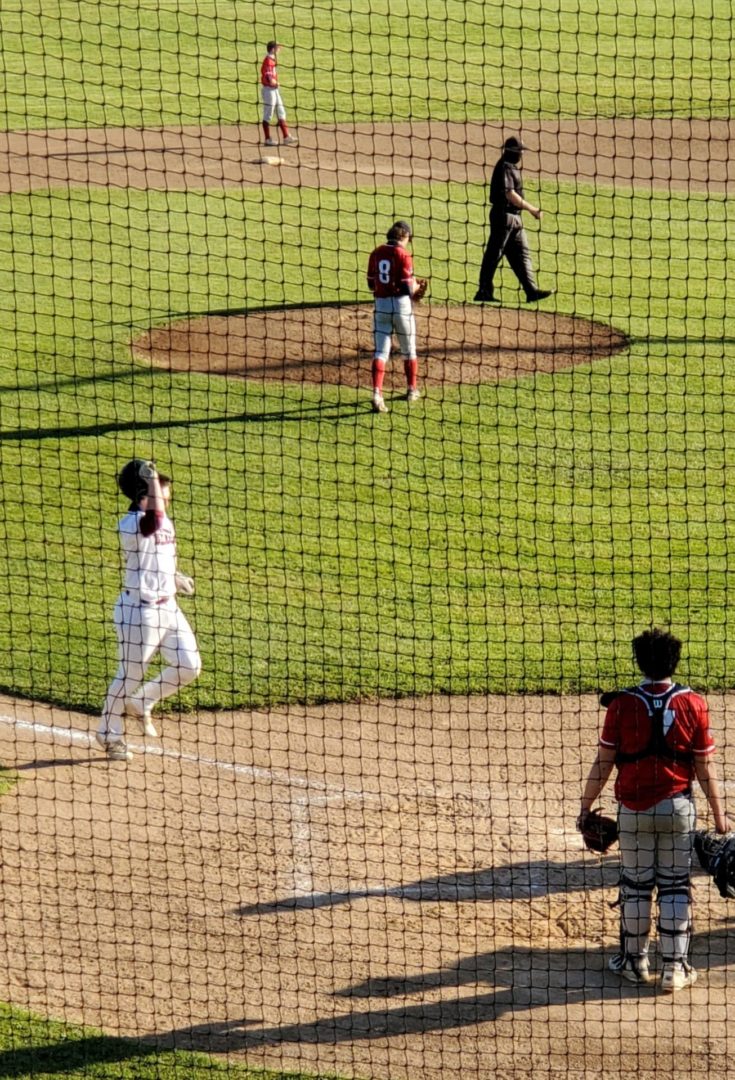 ESN had 4 broadcasts up on Monday and our re-caps, pictures and video highlights are all below.

The Ravens experience and depth showed up big in this match but the spunky Royals were no push-overs. In the 1st set the Ravens pulled out to an early lead 15-12  but the Royals closed within 1 to make it 15-14. The Ravens then reeled off 7 straight to pull away to a 22-14 lead and would win 25-17.

Tumwater 5, Centralia 1
(Tumwater, WA) The Tumwater Thunderbirds baseball team continued their winning ways Monday night with a 5 to 1 victory over the Centralia Tigers. It was a tightly contested contest moving at brisk pace with a lone run in the first inning driven in by the T-Birds starting pitcher Ryan Orr being the difference in the game until the 5th inning.

Tumwater would be on the verge of breaking things open thanks to a lead off double by the nine hitter, Brayden Oram. Oram would advance to 3rd due to a balk from Centralia starting pitcher, Noah Aliff. Nate Kassler would earn the walk after the balk and watch his courtesy runner steal their second base of the game, Jack Jones. The Thunderbirds 3rd baseman, Connor Bourbon would hit a timely double to drive in both Oram and Jones to extend the lead for Tumwater to 3 to 0 in the bottom of the 5th.

The Tigers would claw their way to a run in the top of the 6th however as a lead off walk drawn by Mosie Eport would result in a manufactured run by the Tigers. Eport would steal 2nd base before the Tumwater pitchers would begin to see some control issues with back to back walks to Cameron Erickson and Paris Chavez to load the bases with two outs. Zack Rone would come up and hit a line drive to left to drive in the lone Tiger run of the night asTumwater pitcher Jordan Hanson would strike out Landen Jenkins to the end the Tiger threat in the top of the 6th.

Tumwater would go on to make up for that run and add another for good measure in the bottom half of the 6th.  The Tigers were their own worst enemy in this half of the inning as the Thunderbirds would get both of their runs without a base hit due to a hit batter, three Tiger errors, and a wild pitch. Tiger pitcher Aliff would be able to stop the bleeding in the inning by getting the 3rd out via strikeout from Kassler.

With a four run lead in the top of the 7th, Tumwater would turn to Austin Sheldon to slam the door on the Tigers. Sheldon would do just that by striking out the 7, 8 and 9 hitters of Centralia in order to secure another “W” in the win column for the Thunderbirds.

Our visiting Pacific Sports Spa visiting player of the game for Centralia was Noah Aliff. Aliff would unfortunately be saddled with the loss for Centralia, but pitched a rather stellar game for the Tigers. Aliff would be the only pitcher used by the Tigers as he would pick up a complete game with 6 strikeouts. The final score will ultimately overshadow a solid pitching outing from Aliff tonight.

Our home Thorbeckes home player of the game for Tumwater was Ryan Orr. Orr would earn the win tonight as the starting pitcher for Tumwater. Orr would not be able to go the distance as the starter tonight, but had 4 outstanding innings limiting the Tigers to one hit, no walks and 10 strikeouts. Six of those ten strikeouts happen to be the last six batters he faced, sitting the Tigers down in order in the 3rd and 4th innings. Orr ultimately had the game deciding run as well going 0 for 3 at the plate, but driving in the go ahead run in the bottom half of the first due to a error by the Tiger’s left fielder.

WF West 12, Black Hills 2
(Chehalis, WA) It didn’t take long for each team to get on the scoreboard. The underdog Black Hills Wolves lit the board first in the top of the 1st inning when Braiden Bond got ahold of a Brit Lusk fastball and launched it over the left field wall for a 2-out solo shot home run and a 1-0 lead.

In the bottom of the 1st it would be the Wolves who helped the Bearcats beginning with Brock Bunker who struck out but a passed ball would allow him to get to 1st. So instead of 2 outs, there was only 1 out when Drew Reynolds slapped a base hit. Gavin Fugate would then get on and Bunker would score on a fielder’s choice and an error.

Kolby Hansen then got on by error and another run scored. Brit Lusk then helped his own cause with an RBI base hit and after 1 the Bearcats led 3-1. WF West would add another run in the bottom of the 4th when Cade Haller came in and it was 4-1 going into the top of the 5th.

Black Hills would grind away and score a run, Marcus Rison drew a walk followed by a single  by Jaden Cotey (Video below) and runners were on the corners. With no out relief pitcher Gabe Smitherson would get a strike out with Cotey in motion to 2nd and Reynolds would throw him out but they trade the strike ’em out, throw ’em out double play for a run as Rison came into score to make it 4-2.

In the bottom of the inning the Bearcats would blow up for half a dozen runs. With 1 out, Lusk doubled and was followed by an RBI double from Tanner Vaughn. After a fly-out, Andrew Stafford would then double in a run to make it 6-2. Haller would single and was followed by a walk to Evan Stadjuhar to fill the bases.

Reynolds then stepped up and would crush a Braiden Bond fastball onto the WF West tennis courts clearing the bases for a grand slam home run and it was quickly 10-2. (Video below) The Bearcats would score 2 more in the bottom of the 6th to end the game 12-2.

WF West is now 5-0 on the season while Black Hills drops to 2-6. Our Thorbeckes home team player of the game went to Drew Reynolds who was 4-4 with 2 singles, a double and a grand slam, 2 runs scored and 5 RBI. Our Pacific Sports Spa visiting player of the game was Derek Clark who pitched well to keep the Wolves in the game despite 6 team errors.

Napavine took advantage of walks and defensive miscues by Toledo to take a 5-2 victory in 2B Boys Baseball action.  Napavine scored two early runs thanks to a couple of walks that came back to haunt Toledo pitching.  Gavin Parker walked with two outs in the first inning and came into score on an RBI single from Braiden Osborn.  More of the same occurred in the 2nd inning as Scott Burdick lead off with a walk and eventually scored on a Deacon Parker sacrifice fly to make it 2-0 Napavine.

Our score remained the same until the 5th when Napavine struck for another run this time Toledo’s defense let them down as back to back errors allowed Connor Holmes to score after his leadoff single.  Once again errors took their toll again on Toledo in the 6th inning as two more errors led to two Napavine runs.

Toledo’s offense finally came to life in the bottom of the 6th inning as Toledo used 3 of their 6 hits for the game to push across two runs.  Singles by Justin Filla and Jesse Towns got things started.  Caiden Schultz followed with an RBI single and Geoff Glass with a sacrifice fly to make it 5-2.  After a two out walk by Napavine starter Laythan Demarest, reliver Scott Burdick came in and got the final four outs of the game to collect the save.