ESN had 3 games on tap on Monday and our results, re-caps, pictures and videos are all below.

The Tigers needed an extra inning to complete their comeback win over visiting Montesano on Monday afternoon at Wheeler field in Centralia. The Bulldogs got off to a fast start touching up the Tigers for 4 runs with 2 outs in the top of the 1st. Jack Anderson got things rolling with an RBI 2-out single to score Isaiah Pierce. Centralia starting pitcher Cameron Erickson would then struggle with control and walked 3 in a row, gave up a 2 RIB single to Tyler Johansen and walked a 4th runner before getting out of the inning.

Centralia got 1 back in the bottom of 1 as Bayden Teitzel led off with a stand-up double and scored on an RBI walk to Landen Jenkins. Monte’s Bode Poler led off the top of 2 with a single and would come around to score to make it 5-1 but Centralia answered with a 3 spot in the bottom of the inning with Sawyer Kassel, Mosha Eport, Noah Aliff, Erickson all with base hits, Teitzel had an RBI walk and Paris Cahvez an RBI sac fly.

Centralia’s 2nd pitch Jenkins calmed things down and gave up just the 1 run for the next 3 innings while Cayleb Renninger did the same for the Bulldogs. Montesano took a 6-5 lead in the top of the 6th when Lucas Salstrom scored for Montesano as he pitch ran for Jack Anderson who started off the inning with a single. Montesano was set to extend that lead but Jenkins came up with the play of the game as he laid out to steal a sure RBI single from Monte’s Jackson Busz. Centralia would tie it up in the bottom half of the inning when Aliff got on by error stole 2nd and scored on a Chavez RBI single.

Neither team could break the 6-6 score in the 7th as Aliff and Busz came in to relive. Aliff gave up a bunt base hit to Salstrom in the top of the 8th and he worked himself over to 3rd while Malaki Osbekoff grounded out and then Aliff struck out Reninger and Christian Prall.

Aliff led off the bottom of the 8th and walked then stole 2nd. The Montesano coaching staff then intentionally walked Erickson. A balk was then called on Busz sending the baserunners to 2nd and 3rd and again the Bulldog coaches intentionally walked Chaves sending Gabe Seymore to the plate with the bases loaded and no outs. Seymore didn’t waste anytime as he drove the 1st pitch right up the middle of the defense for a walk-off RBI single and Centralia beat Montesano 7-6. 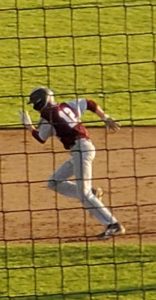 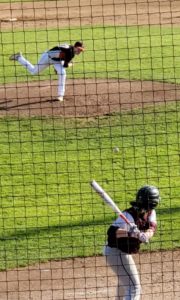 The Bearcats struck quick and then stood behind Tanner Vaughn explosive effort on the hill as he struck out 14 Highclimbers while tossing a no-hitter. Vaughn went 6 innings and Andrew Stafford came in to finish the job.

Vaughn and Stafford got plenty of early offense with 2 in the 1st inning and then extended that lead to 4-0 on a 2 RBI stand-up double from Britt Lusk in the bottom of the 3rd. With 2 outs, Lusk sat on a 3-1 fastball and drilled it to left field fence. Lusk would then get driven in on a hit by Stafford, who had a pair of hits to make the score 5-0.

Drew Reynolds would finish the scoring with a Sac fly RBI and the 6-0 score would hold up for the win. WF West is off to a 1-0 start and faces Rochester on Wednesday. Shelton drops to 0-1 and will travel to Black Hills on Wednesday.

The Beavers came in looking for their first win after falling short against Forks and were set to host the Hoquiam Grizzlies. Tenino would knock in a pair of goals to get the offense on track. Chris Ramez got it started in the 25th minute with a gorgeous hooking corner kick that split defenders into the net. That was followed by a re-direct from Tristan Whitaker off a rebound shot from Zack Russell.

Russell got into the act with a tremendous goal in the 54th as he tiptoed down the backline and somehow fired a shot that also hooked into the far side of the net for a 3-0 lead about 15 minutes into the 2nd half. Russell then teamed up for a brilliant goal from Salvadore Ontiveros who played the ball up from mid-field to Russell who then passed it back in front of the goal and Ontiveros back heeled it in for a 4-0 lead.

Hoquiam would get on the board late with 2 quick back-to-back goals with less than 12 minutes to play. Roman Bedolla Lopez scored both of them for the Grizzlies and then in stoppage time the Beavers added a final tally off the foot of Anthony Levi. Tenino is now 1-2 on the year and plays at Raymond-South Bend on Wednesday. Hoquiam drops to 0-1 and plays at Elma on Wednesday.