(Tenino, WA) It was about 43-degrees, cloudy, gray, drizzly with a steady brisk wind cutting to the bone but there was not one complaint from any of the 40+ players and coaches and a scattering of allowed home fans in Beaver Stadium. Although you could not see see smiles on their faces, everyone’s smiling eyes were obvious. The Rochester at Tenino girls soccer game on this chilly February morning was the first team competition in Washington State High School sports since March 13, 2020.

Tenino Athletic Director Joe Chirhart was nervous about being the first back to action but said it was about getting the kids on the field. “We got the protocols down for the teams, players and officials but I was a little concerned about handling the spectators.” Chirhart added that everyone did great and sat socially distanced and everyone wore a mask. I did have to turn a few people away, which I absolutely hated to do but we have to follow the rules. We have to deal in reality and our top priority first and foremost is to get the kids on the field and playing.” 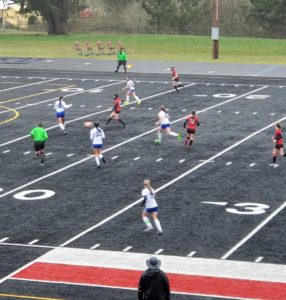 The game itself was dominated by the Beavers who are coming off a run to state last year. Tenino under Head Coach Kevin Schultz picked up where they left off last year with a convincing 4-0 win. It took just 6 minutes for the senior forward Brieanna Dell to punch a shot in from right in front of the goal. 9 minutes later Dell lined up a corner kick and laid it right into the box and it appeared a Rochester Warrior would clear it out but instead junior Alivia Hunter got her foot on it and blasted it in for a 2-0 early lead.

Tenino dominated time of possession and played 3/4’s of the game on the Warrior side of the field. However, Rochester broke free with about 10 minutes to go and Amerika Jones just missed getting into a one-on-one with the Tenino keeper. The Beavers once again took control and penetrated deep into Rochester territory when Nicole Fralick got taken down in the box and Tenino received a penalty kick. Junior Megan Letts lined up the shot and popped it into the back of the net and Tenino would go to the half with a 3-0.

Tenino played the first into the stiff breeze and scored 3, the 2nd half they had the wind at their back and although they played most of the 2nd on the Rochester side of the field they only added one to their score. In the 62nd minute junior Abby Severse broke free and blasted a shot into the corner for the commanding 4-0 lead. The Warriors struggled even more trying to kick into the wind and keeper Madison Bates had several solid saves to keep the score down but she was overwhelmed at times with just to many one-on-one chances for the Beavers.

Tenino gets off to a 1-0 start and will play again on Tuesday at home against Montesano. Rochester will look for their first goal and win also on Tuesday when they host Black Hills. Our Thorbeckes Home team player of the game went to Brieanna Dell and our Pacific Sports Spa visiting player of the Game to Amerika Jones.

Mon Feb 8 , 2021
2/9/2021 “That Got Me To Thinkin’…?” “On Teeth” Chapter 34 By Bruce Williams Staring at my byline picture, seeing my left fang sticking out and thankful that my crooked lower teeth aren’t also depicted, I started thinking about teeth in general.  It’s not as if mine are like little baked […]