(Renton, WA) The WIAA Executive Board voted Tuesday night to push back the start of the sports season to February 1st. The WIAA had created a 4 season plan over the summer that allowed low risk sports cross country, slow pitch and golf to compete in September and October for season 1. No schools, leagues or districts chose to compete in season 1 in any of those sports. Season 2 was then created which would be the traditional Winter sports and that was set to start January 1 to early March. Season 3 is the traditional Fall sports that went from about March 1 to early May and season 4 the traditional Spring sports from May 1 to the end of June.

With the increase of Covid-19 infections and the Governor’s stricter guidelines for indoor gatherings have now put indoor sports into serious question. The board decided to keep the same 3 season format but push the start date to February 1st. So the new seasons will be Season 2 (winter sports) February 1 (January 25 for gymnastics) to March 20, Season 3 (Fall sports) March 15 (March 8 for football) to May 1 and season 4 (Spring sports) April 26-June 12. Gymnastics and Football start earlier because both require 10 practices before you can play all other sports will be a minimum of 5 practices before playing. The WIAA also extended the out of season coaching window to January 23 so sports that are allowed to practice can continue to do so.

Many are taking this news as the next step to ultimately cancelling all sports for the season. Could that happen? Of course it could but there are far more reasons to be optimistic than pessimistic. The first thing to understand is that these schedules are all based only on culminating tournaments and events or in other words State Tournaments and Events. The new schedule lays out the pathway for these State events to happen but if it is determined that they can not that does not mean there won’t be any games. This is where the major miscommunication occurs.

(Both episodes are free to view on our ESN/NFHS web page which you can find here: Tim Thomsen Interview   Mick Hoffman Interview)

Currently under the new plan if local leagues or districts are in a position to participate in a sport the WIAA is going to leave it up to the individual schools and leagues to form their plan that works within the guidelines they are under in their own counties.

So lets put this into practice and say the Evergreen 2A league which has 7 teams, Aberdeen, Black Hills, Centralia, Rochester, Shelton, Tumwater and WF West (Chehalis). For this league to compete simply between themselves and there are only 7 teams they must comply with the state rules plus 4 other counties. Yes, 4 counties are included, Grays Harbor, Lewis, Mason and Thurston counties. All with their own boards of health and own local politics.

Now take that example and expand it to more than 800 High schools and Middle schools that are members of the WIAA and look for a statewide plan. This is an impossible task and fairness has to come into play. It’s not the kind of fairness we’re used to where everyone gets to have the same opportunity but quite the opposite.

The WIAA is looking at for example is it fair to not allow say the Greater St Helens 3A league play basketball if they fall under the guidelines of their location in Southwest Washington when the Metro league again for example, may not be allowed to play because of surges in the virus in King County? No fairness would be to allow the Greater St Helens league play any type of schedule they can and when they can and then allow the Metro league to play when they can even if it’s in May and June. But it would be impossible to then have a State Tournament under that scenario unless 50% or more of the schools are all competing in the same season.

In this case, let’s say 75% of 3A basketball was shifted to Spring and the other 25% decided to play in the winter where they began. Under this plan the state event would be in the spring with the 75% of the schools and those schools who played on the 25% would not be eligible to play in that event. That sounds unfair but remember, even though those schools can not play in the basketball state event their kids also now do not have to choose between basketball and baseball or soccer or track so there are positives and negatives on both sides but allows the most opportunity to play.

We know this is somewhat complicated to follow but this is also the point of what the WIAA is trying to piece together. The plan is this right now and that is the plan that includes everything a league season, play-offs and a State Championship. This is the goal. If this plan goes off as laid out here then all sports will be played and kids will have their chance to play each sport and each sport will have a final tournament. This is the goal it is NOT an all or nothing.

Next working through the priority list is to play as many sports as possible in the outline. If that is not possible then moving specific sports to another season is an option. Moving sports seasons for some leagues who can’t play until a later date and allowing others to play at the right time is an option but that might mean there won’t be a State Tournament is an option. And finally the last option is to say there won’t be any State Tournaments or District Tournaments and each league and school is free to schedule any sport when they can put a schedule together at any time and start playing.

There was a lot of discussion on this latest outline and some agreement that at some point final decisions will need to be made including does the WIAA just give up on trying to get “culminating” events or State Tournaments in and just let each area of the state start playing in any format that may work?

We talked with several AD’s today and one said he would like a decision to be made sooner than later on State events and if they aren’t in the cards then let’s rip off the band-aid and move forward with scheduling games and events to what we are being allowed to do in our own little corners of the state and get competition back on the field.

We talked with another AD whose administration won’t allow them to even practice at this time due to concerns over liability and lawsuits despite falling under guidelines by the state that would allow them to be doing some minimal practices.

This really underscores the issues the WIAA faces in trying to create a single statewide plan that all schools could fall under. But in the end there is much optimism that sports will be played. The news on vaccines, the data the WIAA is providing the Governor and State Department of Health were literally referenced in the Governor’s speech last Sunday justifying his decision NOT to close schools and NOT to shut down outdoor practices. It shows they are listening and as the WIAA team continues to gather and provide information to the state it remains a very positive outlook for the 2nd half of this school year.

The WIAA Executive Board hopes the new plan laid out on Tuesday night is the final plan and all schools and more importantly all students get a chance to play each sport they normally do, that would be great if this how it rolls out. It feels though, like there are going to be more changes and decisions and maybe as soon as the next Exec Board meeting in December.

Regardless of what format or schedule is ultimately decided upon, Thomsen says it’s more important to get games and competitions going and there is a time that we are simply going to have to decide and settle on the path least resistant to offering the most options to the most number of students.

Thu Nov 19 , 2020
11/19/2020 (Renton, WA) WIAA Executive Director Mick Hoffman has released a statement pushing for more opportunities for kids to get back to playing sports and participating in activities. Hoffman also is in favor of more kids returning to school. In his statement Hoffman cites numerous studies and data collection that […] 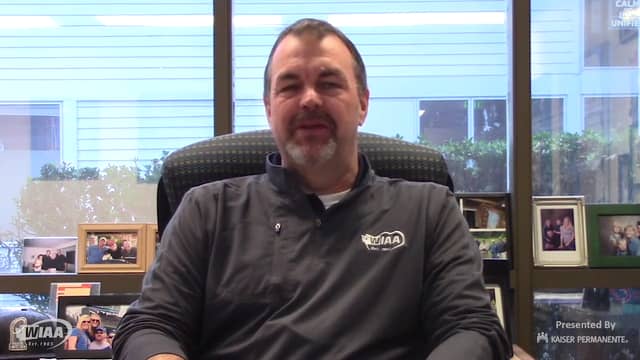