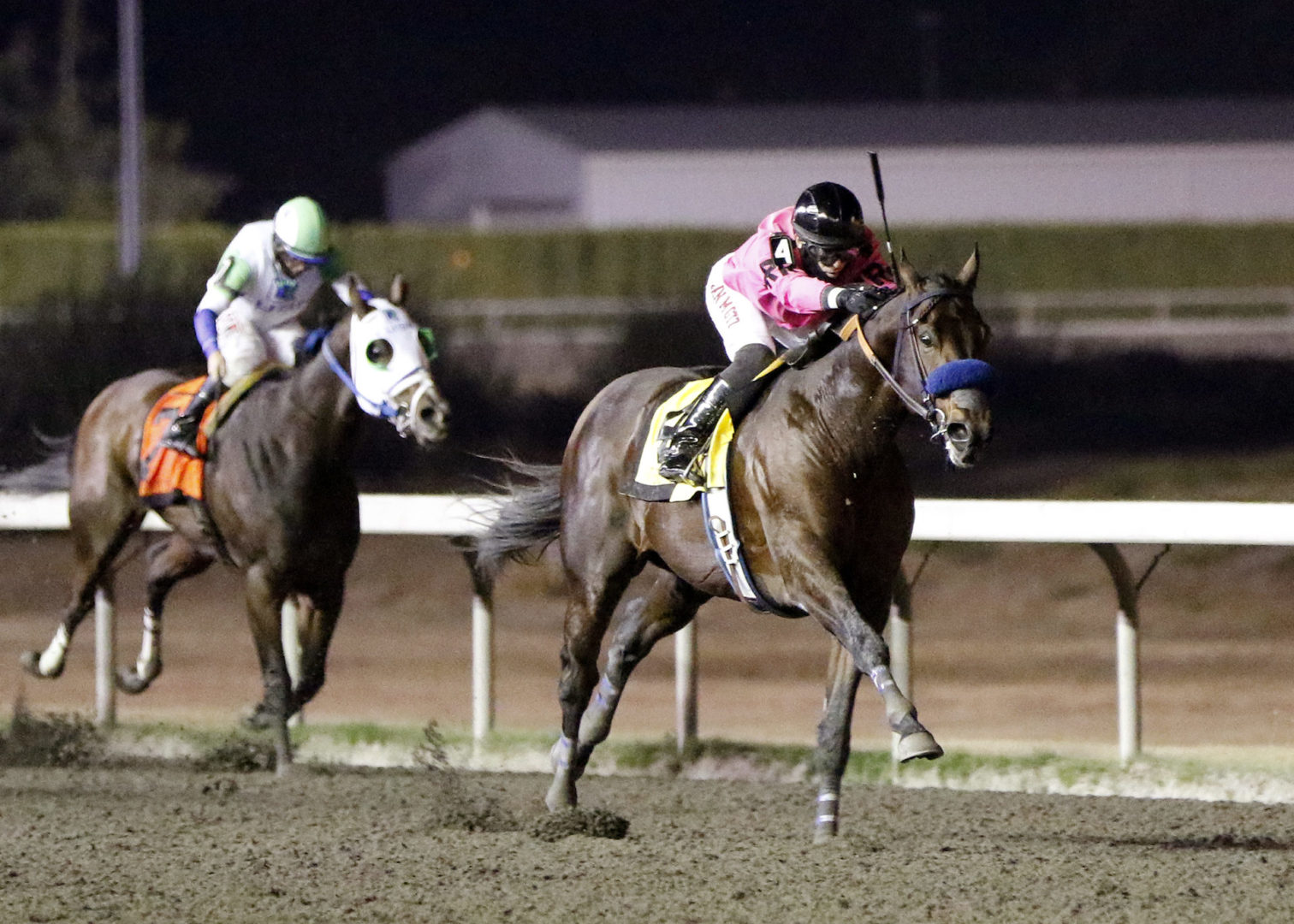 Two more stakes races were on the line in week 12 and none bigger than this with the $100,000 Longacres Mile and the $40,000 Emerald Distaff. Our coverage of both races below.

(Auburn, WA) There were many reasons for something crazy to happen in the 85th running of the Longacres Mile. There were no fans, it was on a Thursday and it was being run at night under the lights for the first time ever. Trainer Blaine Wright has been the top Stakes trainer over the last few years but this race had escaped him. So running a very talented colt that ran in the 2019 Preakness would seem like a slam dunk in the Grade 3 Longacres Mile.

Except, that Preakness race 16 months ago was his last. Anothertwistafate came up sore out of that race and Wright turned him out without really knowing when or where he would get back. Wright took his time and when he got ‘Twist back on the track it was a steady stream of workouts that simply got better and better. Anothertwistafate worked on August 9, 16, 23 and 30 at Golden Gate in his bid to return to racing.

His resume and clear talent made him the easy morning line favorite but there is always a question for any horse making their first start in more than a year let alone 16 months. The current pandemic appears to have limited the number of out of state horses that normally invade the state for the Mile and in fact the owner of Anothertwistafate, Peter Redekop may have sent 2 horses to the Mile in normal circumstances where the race is in August and the purse is 200k instead of 100k. The other Redekop charge would have been Anyportinastorm who just missed winning the big race last year to Law Abidin Citizen.

Wright said that it was Redekop who decided which one to enter and thought this would be a great spot for Anothertwistafate to make his return to racing and he couldn’t have been more correct. ‘Twista ran the race exactly like he had been running just prior to his start in the Preakness, just off the pace and then made his move on the turn. Early in his career he would right to the lead and in fact in his only 3 wins prior to the Mile led every step of the way in all 3 races.

When they began to try and rate him a little bit he finished 2nd twice. Then came the Preakness Stakes so coming off of that would Wright want to go back to trying to take the lead from the start? Highly unlikely with the speedy Papa’s Golden Boy in the race along with second favorite Five Star General who likes to be near the front and other front running types at long odds in Makah Lane and La Waun.

Juan Gutierrez got the ride on Anothertwistafate and despite being his first time aboard he rode a perfect race which should not be a surprise for the 2nd all time winning jockey at Emerald Downs and closing in on the top spot. Gutierrez laid off the pace as Papa’s Golden Boy went straight to the front. Outsider La Waun broke 2nd and Five Star General was 3rd with ‘Twista just behind. 3 lengths would separate the top 4 heading into the backstretch. It was thought that if Gary Wales aboard Papa’s Golden Boy could slow the Vince Gibson trained speedster down a notch and go :22 and :45 they just might not catch him.

Papa indeed do just that but he could never really get distance between him and the others like he has done in other races. His biggest lead was 2 and half lengths unlike the 6 and 10 and 12 length leads he had in his previous races. Papa’s largest lead was heading into the far turn and about half way around is when Gutierrez took the brakes off of ‘Twista and he quickly passed Five Star General and a fading a La Waun and was just a length behind Papa at the quarter pole. Turning for home Anothertwistafate had total control  and drew out to a length and half lead and expanded that cushion to an easy 4 and 1/2 length win. Five Star General the shipper from Hasting Park in Vancouver BC ran as good a race as he could but was clearly 2nd best. Owner-Trainer Glen Todd had coaxed the only out of town jockey to come ride and he has done ok for himself, Mario Gutierrez had won this race twice before and has also won the Kentucky Derby twice.

Five Star General finished 2 3/4 lengths in front of the top local entry finisher, The Press at 46-1. The Press is owned and trained by Howard Belvoir and Jennifer Whitaker guided The Press to an impressive run at long odds. The Press out-finished the top favored local entry Elliott Bay. Of course the irony is Elliott Bay was claimed by owners Chad and Josh and Trainer Frank Lucarelli from the Belvoir barn last season. Bay with Eddie Martinez aboard need a perfect scenario for his late kick to run past everyone and despite getting the pace the top 2 finishers were simply not going to slow down and Bay finished a solid closing 4th. Martinez did claim foul against The Press going into the 1st turn but the Stewards denied the claim of foul.

Papa’s Golden Boy faded to 5th and the rest of the field was Makah Lane in 6th, 7th place went to La Waun, 8th place Hollywood Heat and in 9th Take Charge Deputy.

In the Winners Circle Wright celebrated raising the one trophy that had eluded him until Thursday night thanked his crew at Golden Gate extensively for getting Anothertwistafate ready for this race. Former Emerald Downs jockey Kevin Orozco had been the rider exercising ‘Twista at GG. ESN talked with Orozco and he said that Wright had offered him the ride in the Mile but due to Covid-19 restrictions he would have had to quarantine for 2 weeks when he returned to Golden Gate before he could ride or even work on the backside again.

He said it may have been one of the toughest decisions he had to make because he fully believed ‘Twista was going to run well and had a great chance at winning but then having to sit out 2 weeks was two much of a hit financially, even with the winners share. Orozco says he is not sure what the plans are for ‘Twista but hopes there is a race for him at Golden Gate and to get a chance to aboard in the afternoon.

Wright said when he got Orozco’s answer he knew immediately he wanted Juan G to take the mount. He felt Gutierrez would fit the running style and would get him close and have the patience to wait until the right time. Wright was certainly correct in that assessment. It was Gutierrez’ 3rd Mile win he had previously won on The Great Face in 2007 and 2005 on No Giveaway. Wright at that time was the assistant trainer for Grant Forster when No Giveaway won, but now he has his own Longacres Mile victory.

Anothertwistafate stopped the clock in 1:34.10 and ended up the 6-5 betting favorite. ‘Twista is by Scat Daddy and out of Imprecation and was bred in Kentucky by Pursuit of Success LLC. He earned $55,000 for the win and pushed his career earnings to more than 358k. His career record is now 4-2-0 from 8 career starts and his 2nd Stakes win.

Juan Gutierrez had a pretty good day finishing with 4 wins in the 5th, 7th, 8th and 9th races. The 8th race was the 100k Longacres Mile and the 7th the 40k Emerald Distaff. Gutierrez was again aboard Alittlelesstalk for owner-trainer Roddina Barrett for the 3rd time this season. Gutierrez piloted Alittlelesstalk to an Allowance win on July 16th and then a solid 2nd in the Boeing Stakes behind Killarney Lass from the Frank Lucarelli barn.

It looked like it would be a repeat of the Boeing Stakes with 5 of the 7 starters all coming out of that race and it was no surprise that Killarney Lass who won by 5 lengths was the 1-1 favorite. The two starters that weren’t coming out of the Boeing Stakes were Reginella, a Blaine Wright starter coming up from northern California. The other was Amazonian from the Glen Todd barn from Hastings Park. The question was would either of the invaders have an impact on the 5 that had faced off in the Boeing on August 13th.

The betting public for the most part did not think they would as Lass was 1-1 and ‘Talk the 2nd choice at 7-2. They did think out of the 2 Amazonian was the one who was let go at 5-1 while Reginella went off at 12-1. Dontkissntell the 3rd place finisher in the Boeing was 8-1, Paddy’s Secret also trained by Lucarelli was 12-1 and Diamonds R ended up 14-1.

As expected Killarney Lass with Eddie Martinez went right to the lead of the 1 1/16th Distaff by 2 lengths while Alittlelesstalk settled into 2nd just like in the Boeing. Diamonds R and Dontkissntell were up close 3rd and 4th but early on it looked like a match race between the same two from the Boeing. As Killarney Lass worked her way up the backstretch, Gutierrez stayed patient riding almost the exact same race as in the last.

As they hit the far turn Killarney Lass extended that lead to 4 and 1/2 lengths and it appeared a repeat in the Boeing was on the way with the only question of how much she would win by. Outside of a brief run from Reginella who quickly flattened out it was only Alittlelesstalk who had a shot at the heavy favorite.

At the 1/8th pole Lass still had a handy lead but “Talk was starting to warm up and the distance began taking its toll on Lass and the faster Alittlelesstalk went the more Killarney Lass slowed down and Alittlelesstalk went roaring past to pull away for a 2 1/2 length win. Killarney Lass was stopping and her stablemate outsider Paddy’s Secret got her at the wire for 2nd and Lass settled for 3rd. Reginella completed the superfecta with Amazonian taking 5th, Dontkissntell 6th and Diamonds R last.