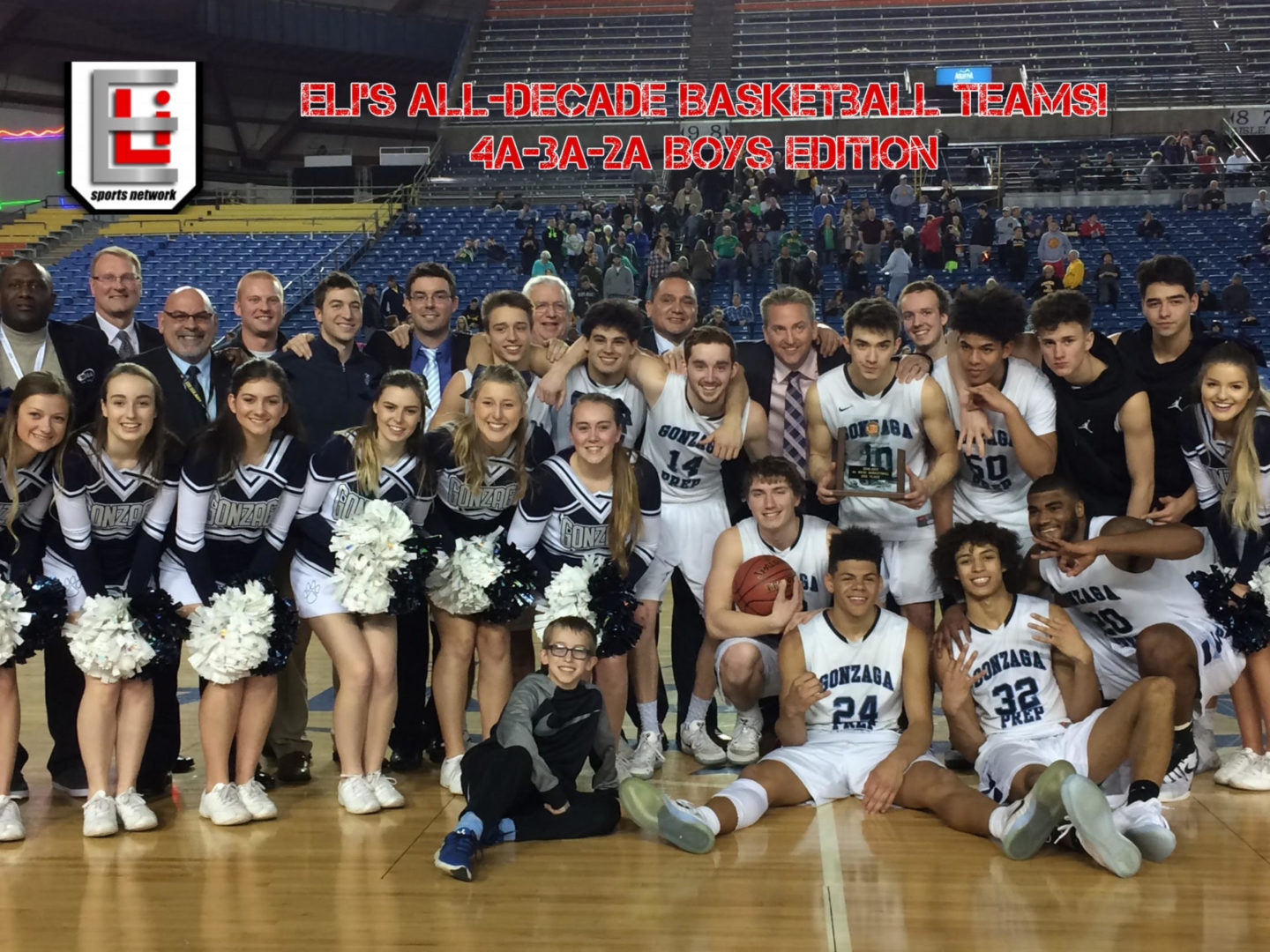 (Centralia, WA) We have named our Boys Basketball All-Decade Programs. We mentioned in our last all-decade team article that Eli Sports Network will be celebrating the 10 year anniversary this coming fall. Doing these all-decade teams for their respective sports gives us a chance to look back and reflect on the success and consistency of these programs in the games and tournaments they have been a part of over the 10 years.

This list focuses on the success of the school’s programs, not individual teams. We have come up with a mathematical formula and are confident in measuring the success of these programs over the last 10 seasons. State championships do help with recognition, but the formula helps recognize consistent great play.

Just like some of the teams in our Fall All-Decade Teams, some teams played in multiple classifications and we did include all their finishes for their point totals. This list is about getting into the top 8 on a regular basis regardless of the classification. The teams classifications on this list are assigned to where they currently reside. At the end of each list, will be our Top 10 combined Programs of the Decade.

Gonzaga Prep have been the most consistent teams in a tough 4A group. From 2011 to this passing season, the Bullpups successfully placed in state six times. Of those six times, three of them were for state championships. They kicked off the decade in style with a title in 2011 by defeating Curtis 61 to 41.  The Bullpups earned the other two titles in back to back seasons by winning a nail biter in 2018 defeating Federal Way 54 to 52 and knocking off Mt. Si 69 to 43 in 2019. The other three places include back to back 3rd place finishes in 2016 and 2017, as well as a 6th place finish in 2014. Those finishes were more than enough to claim our All-Decade Championship.

Federal Way has been just about as consistent as Gonzaga Prep every way possible by placing six times in state as well. The Eagles success this decade came with a little bit of slow start as they did not place in 2011 to 2014, but when they got going, it was hard to not notice. The Eagles showed up on the scene with back to back state championships in 2015 and 2016 by defeating Davis 65 to 46 and Kentwood 66 to 54. That 2015 title would be the start of a six year placement run and counting. In 2017 the Eagles finished in 6th and fell just short of tasting another title again in 2018 with a second place finish to the aforementioned Gonzaga Prep, a 3rd place finish in 2019 and a top 8 finish to wrap up the decade.

The Vikings are another one of the teams on our list with six state placements in the past decade. Unlike the two teams above them in our rankings, the Vikings have one state title to their credit with a victory over Jackson 60 to 56 in 2013. Curtis was on the doorstep of starting the decade off with a title but fell to Gonzaga Prep 61 to 41 to earn the 2nd place trophy in 2011. The Vikings would have a stretch of four straight placements including a 4th place finish in 2017, 5th place finishes in both 2016 and 2019, as well as a top 8 finish in 2018.

Union is the first team on our list to not have won a state championship, however, they were just as consistent with six placements of their own. The pinnacle of their success came at the end of a three season stretch of placements with a 2nd place finish in 2017 as they couldn’t beat Kentwood for the top spot. The Titans would place 3rd in state three times; 2012, 2015 and 2020. Unions’ other two placements include a 4th place finish in 2016 and a top 8 finish in 2019.

Not taking anything away from the Pirates success over the past decade, but they are the first team on this overall list to benefit from a team being reclassified. In a classification, on paper, that seems to feast on itself (outside of the teams above Davis), the Pirates had their share of success early in the decade. The Pirates placed at state three times and have a state title to their name in 2012 when they would defeat Central Valley 48 to 42. The other two placements include a 2nd place finish in 2015 and a 5th place finish in 2011.

The Vikings are one of the most consistent teams you’ll see on this overall list. Over the last ten seasons, they have placed nine times. The one time they didn’t? 2011, the start of the decade. After that season, they would win the championship three times in a row; 2012, 2013 and 2014 defeating a different program along the way. The first championship came against Seattle Prep in a 61 to 58 nail biter, the following season Lakeside (Seattle) would be the next challenger to fall 69 to 59 in overtime and the third victim of the Vikings’ run was Eastside Catholic 47 to 45.  That run from the Vikings shows an example of the resilience the program played with, as a couple of those title wins were a one possession game.  In 2015 they finished in 2nd as Garfield would get the better of them 66 to 51, but would get the golden ball back for the last time in the decade in 2016 bouncing back to defeat O’Dea 70 to 49. Had it not been for Garfield in 2015, Rainier Beach was on the doorstep of winning the state title five seasons in a row.  Since that last championship, the Vikings placed 2nd again in 2018, with two 5th place finishes in 2019 and 2020. Their lowest placement came in 2017 with their 6th place finish.

The Bulldogs are the first oddity on this list. The started the decade off as a 4A team, but due to reclassification were a 3A team the rest of the way. Over this stretch, the Bulldogs won four state titles, three at the 3A level and one at the 4A. The three 3A titles came in the years; 2015 (Rainier Beach), 2018 (Rainier Beach) and 2020 (O’Dea). The 4A title was in 2014 when they would defeat Richland 68 to 59. Rounding up the honors from the 4A level were two 3rd place finishes in 2011 and 2013, the last placing was a 6th in 2012. Back to the 3A honors, aside from the three titles, the Bulldogs have two more placings; 2nd place in 2017 and 3rd place in 2016. Looking at the grand scale of the Bulldogs accomplishments for the decade, of the ten seasons, they placed nine times. Despite the changes in classification for this program, it is as consistent as Rainier Beach as these two programs seemed to have turned into a thorn in each other’s side over this last decade.

Due to the success of Rainier Beach and Garfield, the Irish take a hit on total points, but they still had plenty of success. The Irish placed seven times over the past decade, including taking home the golden ball in 2019 defeating Mt. Spokane in style 70 to 39. O’Dea took 2nd place twice in 2016 and 2020 falling to the previously mentioned Rainier Beach and Garfield respectively, two 4th places finishes in 2011 and 2014, a 6th place finish in 2012 and round up their placings with a top 8 finish in 2018.

The Crusaders are one of the teams in the 3A level that have been able maintain a level of consistency behind Rainier Beach and Garfield. While they never did win the title over the last decade, the Crusaders took home hardware five times. The closest Eastside Catholic came to a title was in 2014 when they came up short to Rainier Beach. After that 2nd place finish, the Crusaders placed 3rd in 2015. After missing placements in 2016 and 2017, the Crusaders have placed three times in a row and counting with a 5th place finish in 2018 and back to back 3rd place finishes in 2019 and 2020.

The way the Wolverines wrapped up the decade may not be what they had in mind. They have missed out on any placements over the last four seasons, however they did have success earlier in the decade. They did take home hardware four times. Their first placement came in 2011 with a 2nd place finish coming up short to Lakes 71 to 56. After no placement in 2012, the Wolverines would go on to place three years in a row, including a 3rd place finish in 2014, 6th place in 2015 and 4th place in 2016.

Lynden is the definition of consistency for the 2A Boys with eight placements in the last ten seasons. Of those eight placements, three were for state titles. The first title came in 2012 when they would defeat White River 66 to 45. Their next two titles in the decade would come in back to back fashion by defeating WF West 57 to 53 in 2018 and in 2019 knocking off Selah 60 to 51.  The Lions would pick up a 2nd place finish in 2014 coming up a little short to Pullman 64 to 58. The other four placements for Lynden were 3rd place finishes in 2013, 2016, 2017 and 2020. As a program it has to feel good to know that over the last ten seasons, eight resulted in top 3 finishes in the state.

Clarkston is one of the teams in the 2A Boys ranks that have enjoyed streaks of success. Their first placement in the decade came in 2014 with 4th place. That season led to back to back strong years and titles for the Bantams in 2015 defeating Anacortes and Shorecrest in a absolute nail biter 60 to 59 in 2016. Clarkston wouldn’t place again until 2019 when they took 4th place again, but would use the momentum for a trip to the title the following season in 2020 where the program would come up short to North Kitsap 56 to 53 and took home 2nd place.

Pullman might be one of those programs that kind of slips the mind when talking about some of the 2A Boys powers, however, earlier in the decade the Greyhounds had a great deal of success.  They would place five times getting things rolling in 2012 with a 6th place finish but bigger things were on the horizon.  Pullman would go on to win back to back titles defeating Anacortes in 2013 and would get the better of the top ranked all decade 2A school, Lynden, 64 to 58 in 2014. The Greyhounds would place in the top 8 again in 2017 and would place for the last time in the decade with a 5th place finish in 2019.

Anacortes tasted success fairly regularly with 5 trophy trips. The Seahawks, much like Pullman, are a program that had a fair amount of success earlier in the decade. In 2012 they had a top 8 finish and would go on to take home hardware the next three seasons. Anacortes placed 2nd in 2013 losing to Pullman in the title game, 3rd in 2014 and 2nd again in 2015 this time to Clarkston. After that stretch, the Seahawks program would place again in 2017 with a 4th place finish, their last of this decade.

Lets take a look at Clover Park first.  The Warriors would take home hardware three years in a row early in the decade, but that ended up being it for the program.  Things started out with a bang for Clover Park as they won the state title in 2011 defeating Squalicum 69 to 54. The Warriors would go on to place 4th in 2012 and 2013, marking the end of their placements for the decade.

As for Selah, they were the opposite of  Clover Park. The Vikings program would have to wait until 2017 for their first placement in this decade, but they would go on to do so for three seasons in a row. That 2017 season finished with the 2nd place trophy after losing to Foss in the title game, followed by a 4th place finish in 2018 and 2nd place again in 2019 this time coming up short to Lynden.


Here is how the top teams from the 4A, 3A and 2A stacked up when combined with all classifications. We are only showing the teams in this part until Wednesday when we publish the 1A, 2B and 1B lists. We don’t want to give away the results until they run and then we will update this list.

All Classification Boys/Girls combined Top 10 Basketball Programs of the Decade.