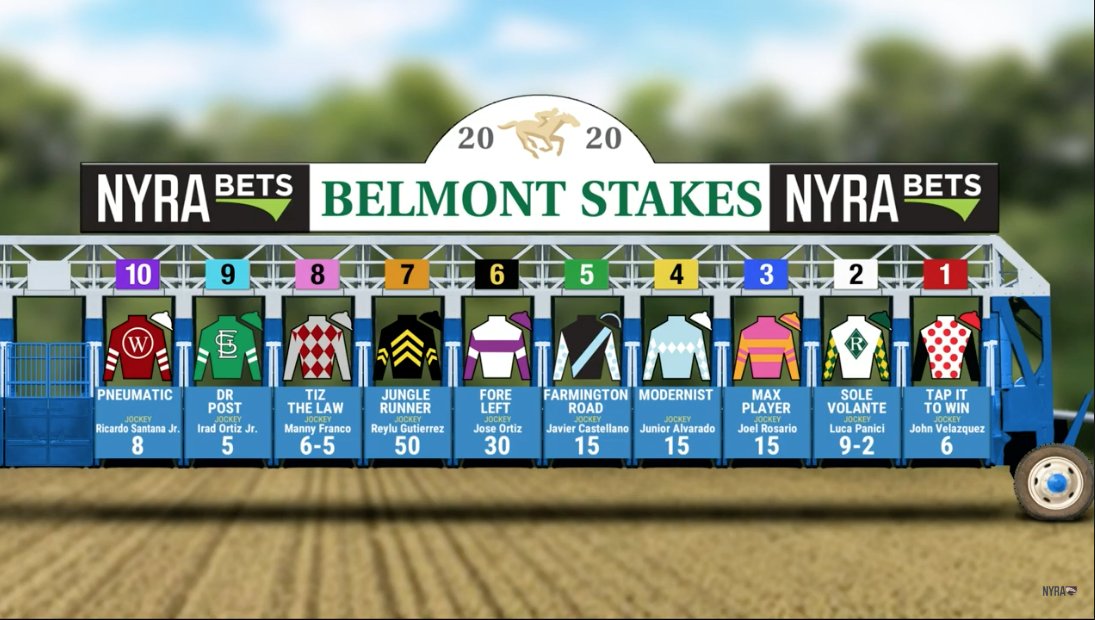 There will be lot’s of changes in the running of this year’s Belmont Stakes. The 152nd running will be the lead off of the 3 Triple Crown races this Saturday instead of the last in the 3. The distance will go from a mile and a half to a mile and an 1/8th and the stands will be empty as no fans will be allowed due to the Corona Virus.

The Kentucky Derby which usually kicks off the Triple Crown races on the first Saturday in May will be run at historic Churchill Downs on Saturday, September 5th as the middle leg and the Preakness which runs two weeks after the Derby is now slated to be run on October 3rd at Pimlico.

A field of 10 will go postward this Saturday trying to become the next winner of the run for the white carnations. #8 Tiz the Law is the morning line 6-5 favorite. Manny Franco gets the ride for the Barclay Tagg trained runner. The second favorite is #2 Sole Volante with Luca Pancini aboard, Patrick Biancone is the conditioner. From Todd Pletcher’s barn, Dr Post is lisgted at 5-1 with jockey Irad Ortiz up, #1 Tap It To Win is 6-1 with veteran rider John Velasquez trained by Mark Casse who is shooting for his second straight Belmont title after winning last year with 10-1 outsider Sir Winston. Pneumatic will break from the 10 hole with Ricardo Santana Jr in the irons from the barn of Steve Asmussen and is the final single digit morning line at 8-1.

Those at 15-1 are the 3 Max Player with Joel Rosario who piloted Sir Winston to victory last year, #4 Modernist who still has yet to have a rider named and 5 Farmington Road with Javier Castellano up. At 30-1 is #6 Fore Lift with Jose Ortiz and the longest shot on the board is #7 Jungle Runner ridden by Reylu Gutierrez.

Fans can bet on the Belmont through several on-line betting services or the Muckleshoot Casino will be open with in-person wagering. Post time for the Belmont is set for about 2:40 Pacific Time.

Emerald Downs remains on track to open next Wednesday on June 24th to begin their 25th season missing the exact start date of June 20, 1996 by 4 days. Originally there were many plans going in to celebrate the 25th year but the Covid 19 virus has put a hold on those plans.

The track will open with no fanfare as fans will not be allowed when they open on Wednesday. The State Racing Commission approved 44 race dates with the 2-day (Wednesday, Thursday) schedule going through the end of July. The Track will shift to a Saturday and Sunday the first 2 weeks of August and then back to 3-day weekend racing, Friday, Saturday and Sunday on August 14 thru October 11 and then a final weekend on October 17 and 18.

Post Times will be 2:15 for Wednesday’s, 5pm on Thursday, 6:30pm Friday’s and 2pm for Saturday and Sunday. This also ends for this year what had become a summer tradition of racing on Saturday nights. All of this of course is dependent on whether phase 4 can be achieved by the beginning of August. If not the Track could maintain the schedule laid out or possibly change again until fans are able to come to the track. The Track administration is working in concert with the State Racing Commission and is helping them remain versatile as the next few months unfold.

The Stakes schedule has also been shifted to begin with a pair of Stakes on August 2, the Angie C and King County Express Stakes. Both 40k races of 5 and half furlongs for 2-year-old fillies and 2-year-old colts and geldings. The Grade 3 100k Longacres Mile is slated for Sunday, September 13th and the 60-thousand dollar added Gottstein is set for Sunday, October 14. There will be a total of 15 Stakes races for Thoroughbreds with $680,000 up for grabs and the $40,000 Bank of America Emerald Championship Challenge on August 23 is a distance of 440 yards for quarterhorses.

Law Abidin Citizen
Last year’s Longarcres Mile Champion Law Abidin Citizen picked up his first 2020 win last Sunday at Santa Anita. Law Abidin Citizen led start to finish in the 6 and a half furlong Allowance race at the Great Race Place. Jockey Abel Cedillo broke from the 5 hole and went right to the lead and never looked back. LAC went off as the 3-2 favorite and held a 2 length lead turning for home and then held off 14-1 outsider Fight on by 1-3/4’s lengths. It was a true merry-go-round race with Law Abidin Citizen breaking first, Fight on second, McKale third and Blameitonthelaw fourth. They never changed position and finished in that order. LAC covered the 6 and half in 1:16.36.

LAC was the 3rd favorite in last year’s Longacres Mile at almost 7-1. The heavy favorite Anyportinastorm went to the lead while Law Abidin Citizen stalked in 3rd place then 2nd and eventually wore down “Port” in the final strides with Cedillo aboard to get the Mile win.

LAC picked up nearly 32k for the Sunday win and has now bankrolled more than 470k. Mark Glatt trains LAC and the owners include Dan Agnew, Gerry Schneider and John Xitco.

While the Kentucky Derby has already been moved to September uprooting a long standing tradition of the 1st Saturday in May, the owners of the only horse ever to be disqualified after crossing the line first continue their legal battle. Maximim Security bumped horses at the top of the stretch and the Stewards for the first time in the history of the run for the roses took down a winner.

Despite the Official sign being lit up on the Tote Board, Maximum Security’s owners Gary and Mary West have not accepted the final result that saw them dropped from 1st to 17th place. They lost in State Court and have now finished their oral arguments to the Court of Appeals. For the full story check out the story in the Bloodhorse by Frank Angst.