The Eli Sports Network is excited to introduce our new columnist, Bruce Williams. We were first exposed to Bruce’s ramblings on his Facebook page. His wit and command of language made us want to hear more from him so we contacted him and offered him his own column. The idea of this column is simple, whatever comes into his mind. It can be sports related or not. We have given him carte blanche as to his subjects of his columns. We hope you enjoy Bruce’s satire, wit and humor, when we get a piece from him it makes us smile and laugh and frankly that is what Bruce must be doing it for because what we are paying him, well let’s just say this isn’t that lotto win he had hoped for rolling in but it might buy a few scratchers for him. So, ladies and gentleman it is our extreme pleasure, honor and humor to introduce Mr Bruce Williams with “That Got Me to Thinking…!”

Hi everyone my name is Bruce Williams and I am just a run of the mill Joe who is a sports fan who loves to observe and then write about what I observe. It’s a kind a therapy for me. I was asked to put together a fun column on a semi-regular basis and it is meant to entertain, make you laugh maybe even blush who knows. I hope to provide an escape for readers even if it’s for just a few minutes. If you are offended by what I write then I would say you are not reading it in the context that I am writing. I hope you enjoy the musings and observations I will be presenting. That said welcome to “That Got Me to Thinking…”!

I sometimes dream that I’m still playing football (in full pads), but I’m the thick 225 pounds I am now instead of the gangly kid that used to drink a blender full of milkshakes every night in an attempt to yoke up.  And in those dreams I’m not this grey beard, but a young, wild buck again—and that got me to thinking…

I played high school football in the ‘80’s (graduated in ‘85) for state powerhouse Tumwater and legendary Coach Otton.  I went through his system right before they got really good (winning state championships in ‘87, ‘89, ‘90, ‘93, ‘10 & ‘19).  Our teams were pretty good…we made the playoffs my junior year at 7-2, and would’ve had a nice run if we hadn’t gone down to Kelso to play a game in the  freezing cold (mid-teens).  Tied at 7-7 late in the game, Kelso kicked a field goal with less than two minutes left that went obviously wide right.  The shivering referees, glancing at each other with the fear of one or more overtimes on the horizon, simultaneously nodded, blew their whistles and thrust both arms sky high in unison.  Standing nearby, mullet streaming out the back of my canary-colored helmet, I muttered loud enough for both of them to hear, “You’ve gotta be f@#&ing kidding me…”  “Watch your mouth, number 4…” was all I got in reply, assuming any unsportsmanlike penalties were disregarded quickly due to their sheepish, blue-lipped guilt.

I was a strong safety that would slot up often as the third linebacker in our 5-2.  They called it the “Ripper” defense and created the spot for me because I wasn’t big enough at 180 to be a full-time backer or fast enough (4.8 40-yard dash) to cover faster receivers.  I did like to hit people, though.  Harmia was our defensive coordinator, and he’d stalk the sidelines crowing scratchy instructions from under his aquiline schnozz, his eyes red-rimmed and watery with fury.  I blocked a couple of punts my senior year—flying in off the left end and launching like I was cliff diving and trying to clear the rocks at the bottom of the gully—right into the punter’s foot.  Harmia ended up welshing on a steak dinner bet on a block I took squarely in the gut (rendering me gasping for air), screaming for my attention from the sidelines to proffer the steak wager right before the ball was snapped and I took flight.

Our special teams coach was named Randy, and was spidery thin with mirrored sunglasses and feathered hair held onto from the ‘70’s.  He also was in charge of all our inspirational pre-game music as we stretched and visualized in the dark of the locker room.  The usual standard fare: Queen’s “We Will Rock You” followed up (of course) by “We Are The Champions”, “Eye of the Tiger” from “Rocky III” and I swear he had Steppenwolf’s “Born To Be Wild” on there twice.  All his submissions were from the vinyl era, so we got him to add a couple of cassette standards—“Rock You Like A Hurricane” from the Scorpions, “For Those About to Rock…” by AC/DC, and even “Knock ‘em Dead, Kid” by Motley Crue.  During practice he wore his coaches shorts impossibly high up, making him appear to be two long legs attached to a neck.

Our locker room was typically disgusting.  We had a set of twins named Doug and Dean we called Beef and Bean—Doug was missing his right arm below the elbow and when he’d remove his hook before practice he’d ring the sweat out of the sock that covered his nub right onto the floor by his locker.  Dean wore the same shirt under his pads the entire season.  It smelled so bad it’d cause you to wince when he came by; it was an odor so offensive it would make you instantly angry when you smelled it like you’d slammed your finger in the car door, but it was your nostrils that you’d hurt.  Another one of the guys who also wrestled (they all seemed to lack any inhibitions) opted to take a stark-naked dump in one of the urinals one day when the only two stalls were both occupied by a couple victims of Arctic Circle (burger joint).  That earned him extra after practice conditioning as punishment.  I volunteered to join him, having jokingly been the one to suggest that he try that method of evacuation as an alternative.

We had a running back that was always squinting and putting his hands on his hips right before he’d say something inane.  He had attempted to go by both of the names Charles and Bill at different times, so we naturally just dubbed him Chucky-Billy and called it good.  He also refused to wear a tail pad, so we’d slap his ass with such effusive congratulations throughout practice that his cheeks shown purple in the showers afterward.  He was a tough bastard, though.  One time he got concussed, and then ran the opposite direction as the rest of the offense on the following play.  He came back to the huddle and asked vacuously, “When does huntin’ season start?” and we all yelled for him to take himself to the sidelines for a few plays to recover.

Our best player was a guy we called Beefer (not to be confused with the aforementioned Beef).  He made all-state at linebacker and went on to play in college.  We were both busboys at Sea Galley together in the off season, and dated two of the hostesses there, followed shortly thereafter by a pair of fair-haired sisters from school.  He had a wispy blond mustache that seemed to be mostly there for swabbing condiments from the “meat sandwiches” (his favorite meal) he was always eating in sets of twos and threes from the apartment he shared with his Tasmanian devil-shaped dad across the street from the school.

I still like to go back on occasion and watch a game at the old stadium.  Coach has a bronze statue out front now, and I always stop and gaze at it for a minute.  He still sits in the middle of the stands, and lots of former players swing by and touch base with him, patting him on the back.  I leave him be to watch his son (now a coach), and his grandson play for the ‘Birds.  And I think back about the smell of the grass (before they turfed it), the twinkle of the lights, the band playing “Tequila” and the cheerleaders kicking to the sky, I and wonder where all the time has gone.

Thu Jun 18 , 2020
6/18/2020 Belmont Stakes There will be lot’s of changes in the running of this year’s Belmont Stakes. The 152nd running will be the lead off of the 3 Triple Crown races this Saturday instead of the last in the 3. The distance will go from a mile and a half […] 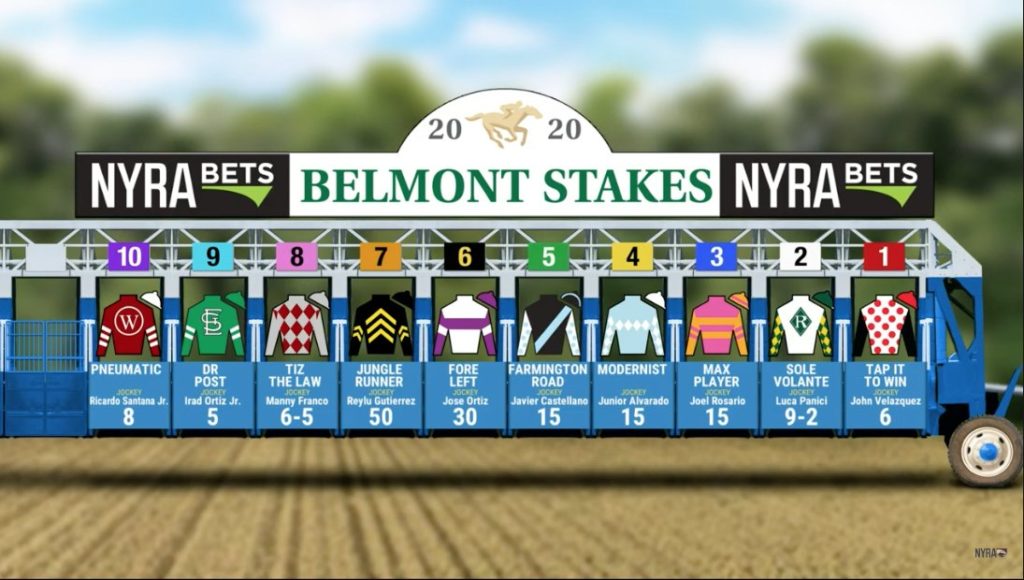