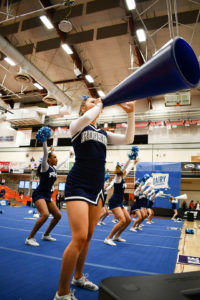 Day 2 of the State Cheerleading Championships was as usual SPECTACULAR! There were 13 categories that were competed but 3 had a minimum score teams had to reach and in each case none of the teams qualified for a trophy. Those categories were 2A/4A Large Non-Tumbling, 2A/4A Large and 4A/4A Super Large. A total of 9 teams, 3 in each category competed but all fell short of the minimum. The other 10 categories each crowned State Champions and a total of 18 trophies were award from 1st to 3rd depending on the number of teams competing. Let’s get to the results!

The Championship went to Steilacoom who won easily racking up 83.5 points beating Selah who took home the 2nd place trophy with a 2.5 point difference over 3rd place WF West 74.25-71.75. For Steilacoom it was their 6th Championship but first in the Game Day Competition. There other titles came in 2011, 2012, 2013, 2015 and 2016 all in the Non-Tumbling categories.

Bothell scored their 4th Championship and in their 3rd category. Bothell took home titles in 2008 and 2010 in the Large. Super Large category and in 2012 won the 4A Non-Tumbling title. This year the Cougars cruised to the win impressing the judges with a final score of 91.75. The race was for 2nd place and the Puyallup Vikings eeked out the award by just a quarter of a point beating Newport (Bellevue) 84-83.75. Both got trophies though as the top 3 were awarded with 9 school competing. 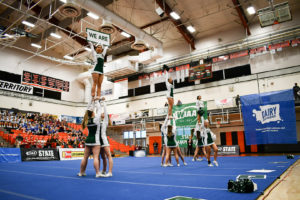 9 teams also competed in this category and the top 3 took home hardware. Skyline who was a double winner last year and has 11 Championships took back this title they won in 2018. The Spartans had their work cut out for them though as they pulled off the win by just 1 point over a great performance from River Ridge 92.75-91.75. The Hawks had won a title last year in the 1A/2A Non-Tumbling Small category. Auburn-Riverside was solidly in 3rd 5 points behind River Ridge and 9 points in front of the 4th place team with 86. The trophy may have been particularly rewarding as the Ravens had to scratched out of their 3A/4A Medium performance when they arrived to late. The drive down took longer than expected but they did not waste their time with the 3rd place trophy in this category. 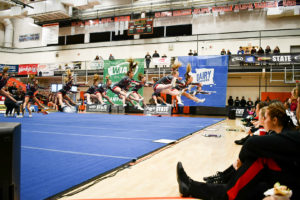 The Bethel Braves grabbed their 2nd ever Championship putting on a show in this performance beating Bellevue 91.5-90. The 2 teams were well ahead of the other 6 teams and only 2 trophies were awarded. Renton, who had won the Stomp competition last year, did not return to defend that title and had a strong showing in this performance but were 8 points behind Bellevue. Bethel last won in 2014 in the Large Non-Tumbling category. Bellevue was looking for their 1st ever Championship.

4 teams competed in this category and 1 trophy was on the line. The Tahoma Bears edged out Moses Lake 91.75-89.25 for their 3rd championship. The Bears won the Super Large in 2007 and then won again last year in the Super Large Game Day category. These 2 teams were well ahead of 3rd place Monroe and 4th place Kentlake.

The top 2 places earned trophies and in this competition it was Mountain View coming home with the victory. The Mountain View coach was the most excited and went wild when the announcement was made. The Thunder held off 2nd place Bethel who was seeking their 2nd trophy of the competition. Mountain View won by 2 points 72.5-70.5. The Braves were well ahead of 3rd place Hazen by 7 points. This was the 1st Championship for Mountain View. 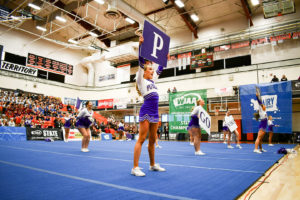 Rogers (Puyallup) had a tough spot to compete in the 2nd performance of the day and followed 2 time defending Champ Skyline who opened the performing on Day 2. Skyline came out strong and set the bar high and Rogers did not disappoint and nailed their routine. They were rewarded with their firt ever State Cheer Championship scoring 81.50 points just short of 2 points better than Sammamish with 79.75. The Totems were also seeking their 1st Championship.

Originally this category had 4 scheduled teams but Auburn Riverside did not get to the competition in time and was scratched leaving 3 to battle it out. Puyallup put on their best performance of the day and it paid off with a championship. The Vikings scored a hefty 85.75 and was well ahead of Skyline by nearly 6 points. The Spartans were more than 9 points in front of 3rd place Emerald Ridge,. This was the Vikings first ever State Title in Cheer. 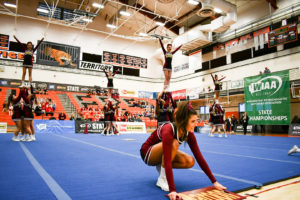 Moses Lake dominated this category rolling to an 11 point win over Bellevue Christian with 84.25 points. The Chiefs long trip to Battle Ground was more than worth it adding a Championship trophy to the 5 they already have. The Chiefs have now won a version of this trophy 4 years in a row. Last year they took the 4A Coed, in 2018 it was the 1A/2A/3A/4A trophy and in 2017 the 3A/4A title. They also won the Large category in 2012 and the Non-Tumbling Large in 2015. Monroe and Clarkston rounded out the results.

After 7+ hours of competition the the large crowd is in need of an energy boost and the Stomp competition did not disappoint. Newcomers Kentridge and Spanaway Lake were electric. The crowd went crazy but it was the Lincoln Abes who had this trophy in their sights since losing it last year to Renton. The Indians did not have a team in this year’s competition so Lincoln was not about to allow newcomers take this event and they set the floor on fire. Lincoln took back the title they had won in 2018, the first year of the Stomp category. The Abes put up 91.5 points while the Chargers took the 2nd place trophy with 88.25. Spanaway Lake (we will agree to disagree on the judges points here) but the Sentinels scored 67.5 points for 3rd just a half point ahead of Connell. Pasco who felt they were short-changed last year had solid effort but fell well short of the top two. This was Lincoln’s second Cheer Title and no doubt set the bar high for 2021.

The WIAA State Cheerleading competition got underway Friday night at Battle Ground High School. 96 schools with 110 teams competing in non-tumbling, game day and stomp in several different levels of classification from small to large. The competition is judged and scored with each category awarding no more than the top 3 teams.

Friday night 12 trophies were handed out in 6 categories and led  by the Kentwood Conquerers who defended both of the State Titles from last year. The Conks were the clear winners in the 1A/2A/3A/4A small non-tumbling racking up 82.5 points and 12.5 better than 2nd place Bremerton. The Knights just squeezed past Yelm for 2nd 70-69 but all 3 received trophies in largest group on day 1 with 9 entries. Woodland had a strong showing just coming up short of taking home some hardware with 67.5 points.

The Conks also won the smallest group of the night beating the 3 other teams in the 4A Game Day small. Kentwood’s crisp and nearly flawless performances stood out as they rolled to win almost outscoring 2nd place Todd Beamer by 20 points.

There was another double winner on day 1 the Decatur Gators took home 2 Championships after placing 2nd last year in just 1 category. The Gators seemed to be the surprise of the night maybe not for winning one but getting 2 titles. The Gators were the clear winners over Newport (Bellevue) in the 2A/4A  medium non-tumbling by 12 points. The Knights were 4 points better than 3rd place Mead to take the 2nd place trophy.

Decatur won their 2nd title in the medium Game Day which was the surprise. The Gators edged Kentridge who looked like they thought they were going to win. The Chargers reaction to the 2nd place announcement was one of surprise and disappointment. Kentridge was just nudged out losing to the Gators by 3/4’s of 1 point 90-89.25. Both teams were more than 8 points in front of the other 4 teams in the category.

In the 1A/2A/3A Game Day small the Capital Cougars made most of their only competition of the day with a strong performance that made them the clear winner scoring 87.75 points. The chase was for 2nd where Gig Harbor knocked off the defending State Champions Sultan 76-73 for the 2nd place trophy.

The awards began with an emotional win that not many saw coming when the Wildcats of Oak Harbor were announced as the 3A medium non-tumbling Champs. The Cats knocked off 5 other teams including Ballard who had won a Championship last year. Oak Harbor scored 72.25 points and Lynnwood got by Ballard for the 2nd place trophy with 70.5 points well ahead of Ballard who grabbed 3rd place with 61.

The competition continues Saturday at Noon. You can watch the Championships live with your Eli/NFHS live video subscription. Just go to the Eli broadcast page and click on watch live for the link to the live stream page. 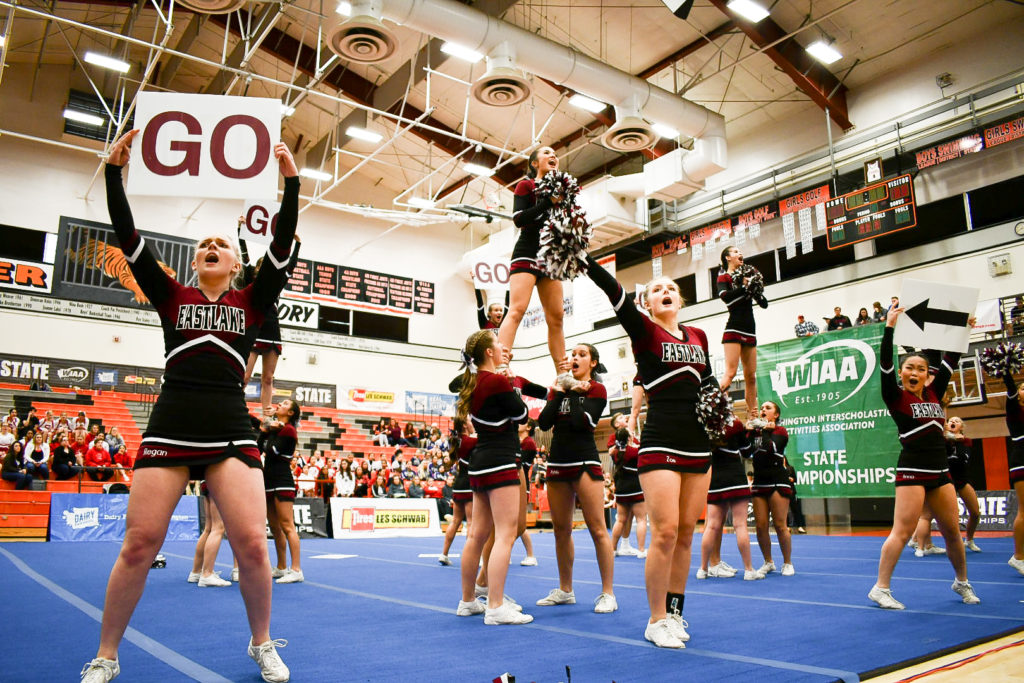