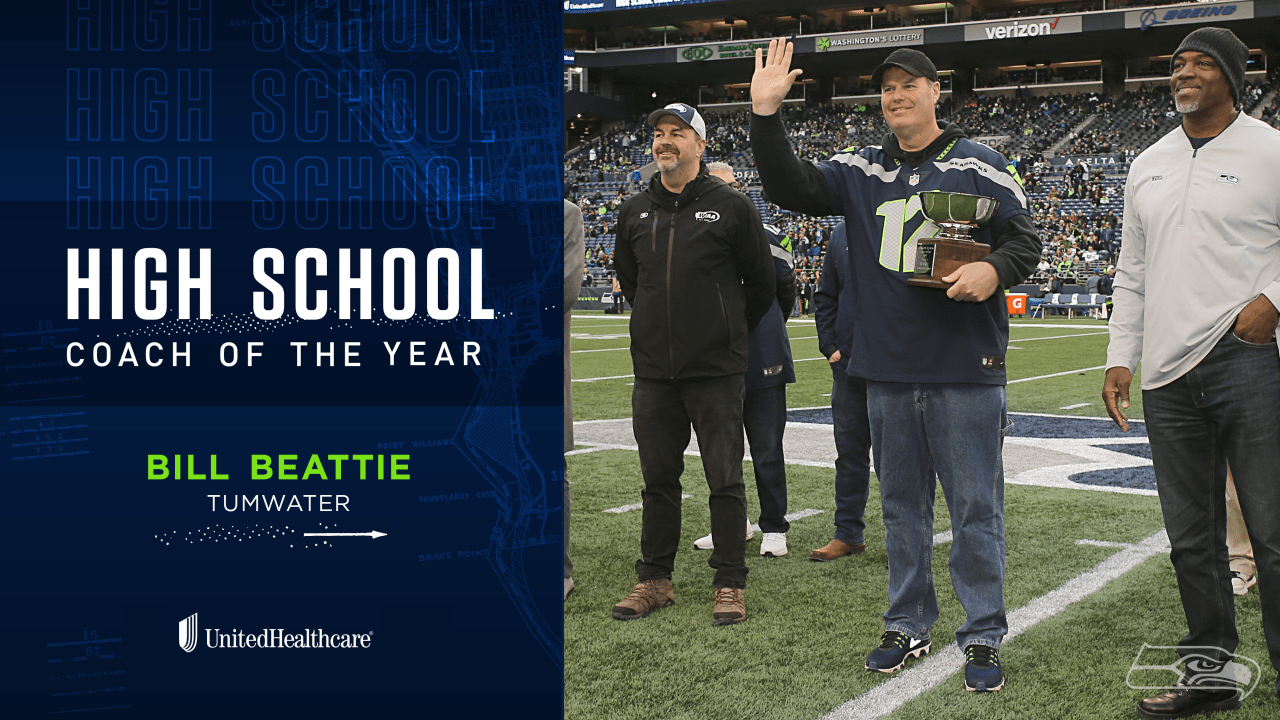 (Seattle, WA) Winning the State Football Championship is has been in the DNA of the Tumater T-Birds for several decades under the direction of the State’s winningest High School football coach Sid Otton. Coach Otton retired 3 years ago with 394 wins and 6 State Championships, including 5 with Tumwater and 1 from Colfax. Otton handled the Tumwater program for 43 years turning a losing culture into one of the most respected in the state.

To step in and take over a program like this it takes guts and frankly just the right person for the job. Bill Beattie left his cozy Head Coaching position at Olympia High School after 22 years and a winning record, multiple League Titles, State Tournament appearances and a Semi-Final appearance to take over for a living legend. Beattie could have stayed at 4A Olympia where he had become a popular coach with his players and parents and had a very loyal following and nearing the end of his teaching career.

Instead he couldn’t wait to jump at the chance that many coaches would want nothing to do with, not only were you coming in to replace the winningest coach in state history but he literally lives next to the school. Coach Otton has Grand kids playing for Tumwater and is a regular with his wife Marjean at his Grand kids games. His son Tim is the Defensive coordinator for the team so the Otton influence remains a big part of Tumwater Football. This is not attractive to many coaches, the pressure to continue the winning ways of the T-Birds, can you imagine if you took over and came away with a losing record?

No you don’t have to win the State Championship every year but you better be in the running. The downside to many would be too big and the upside, well if you can’t be satisfied with status quo this will be a problem because the status quo for Tumwater football is excellence.

Beattie also had an inside track to the job because he played for Otton and was part of the team in 1977 that very likely saved Otton’s job after a slow start of a 7-20 record for his first 3 years as the T-Bird coach. Beattie and company finished with a 9-2 record and the first trip to State in Tumwater history in 1977 so through all these years Otton and Beattie had kept in close touch and when the chance to step in became available Beattie did not hesitate.

His journey for his 1st State Championship has been long but not wihtout tons of success including a trip to the finals his first year where they lost to Hockinson and then lost in the final seconds last season at Lynden. This year was different and Tumwater did not take their foot off the gas pedal rolling through opponent after opponent. Beattie ran a completely different offensive system at Olympia but when he came to Tumwater he knew better than to tinker with a winning formula and understood regardless of his preferences this system is so ingrained into the Tumwater Football culture it would be foolish to change. Certainly Beattie added and expanded some things but he knew his job was to keep this machine on the tracks and he has done that in spectacular fashion.

Beattie will be the first to share this honor not only with Otton but all of his coaches that remained after Otton retired and have been so important to continuing the winning culture of Tumwater football. Many may have believed the mystique of Tumwater Football may have retired with Coach Otton but those who thought that have been proven wrong. Beattie has continued that commitment to excellence and the T-Birds showed it on the field every single week. Congratualtions to Coach Beattie and his staff who continue to bleed green and Never Give Up, Never Never Give Up.

Here is a link to the story of Coach Beattie being named the 2019 Seattle Seahawks and United Healthcare’s High School Football Coach of the Year.