Week 8 on the ESN schedule starts with a trio of strong match-ups on Thursday night. Below are our match-ups and you can watch or listen to this game and our full schedule by going to our broadcast page and click watch live. It’s $10 per month and you can cancel at any time.

The Lincoln Abes can send the home team Lancers to the 3rd place position with a win at Harry Lang Stadium tonight. The Abes are 5-0 tied with Bethel atop the PCL standings. Bethel takes on Benney Lake tonight and outside an upset will be sitting at 6-0 after tonight’s game. If Lincoln can knock off Lakes they too would be 6-0 and it would come down to the final game of the year for the Championship and 2nd place. Lakes would have to lose both tonight  and next week for any of the 3 2-3 teams to have a shot at 3rd place.

Now if Lakes pulls out the win tonight they would be in the drivers seat for 2nd place and a chance at the Championship if Lincoln could then turn around and beat Bethel. Lakes would still need to finish with a win at Wilson next week but if that scenario comes into play there would be a 3-way tie for 1st in the PCL. So all eyes will be on the Lincoln at Lakes game tonight. Our crew on for the call will be Tony Davila and Paul Beattie.

If there were a point spread it might favor the Lightning by 50+ points, it will take a huge effort to pull off maybe the biggest upset of the year for Cle Elum to topple La Salle. La Salle beat #9 ranked Zillah handily last week and they jumped 3 spots in the Evan’s Ranking poll to #7. Cle Elum comes in ranked last in the 1A classification at #54. Will Gaethle and his crew will likely see a running clock early in the 2nd half but if they don’t look for the biggest upset of the year if Cle Elum can rally.

The Ony Loggers are ranked #1 after their impressive woin over former #1 Napavine. The Tigers didn’t fall very far in the Evan’s Ranking to #2 they simply changed places. The Loggers are now 3-0 in the Mountain Division of the Central 2B while Napavine is 2-1. The Pirates are 1-1 with their lone loss to Napavine. If Ony wins they will clinch the Division title but if the Adna Pirates can put together their best game of the season this could be interesting. There is a potential for a 3-way tie for 1st but the Pirates will have to rely on maybe 2 things, first they are fully healthy. Adna has been dealing with several injuries but Coach KC Johnson tells ESN they may be the healthiest they’ve been since day 1.

The other thing the Loggers will need to avoid and it may be impossible to completely avoid it but the natural let-down you have after a big win and there was no bigger win than beating a long time rival and the #1 ranked team like they did last week. Can the Loggers come out with the same intensity or match the high intensity the Adna Pirates will likely bring to the field tonight. It is a crucial test for both squads. Garrett Spivey and Jeff Mattarocci will have the game call for us at 7p.

This is a good old fashioned cross town rivalry between the visiting Tigers and the home team Bearcats. Centralia has been struggling for the past several years and there was not much expectation outside of the Tigers locker room that much would be different this season. So for those who havn’t been paying attnetion much to the EVCO 2A you might be surprised to know this game will give the winner sole possession of 2nd place. Both are 2-1 in league play and WF West is 6-1 overall, Centralia 5-2.

Centralia just might be catching the Bearcats at the perfect time as well since the Cats QB is not expected to be able to play after getting knocked out last week against #1 ranked Tumwater with a concussion. They also lost their best running back and is questionable for Friday’s game. Luke Kilgore and Matthew King will have the call of tonight’s game.

The defending 4A Champpions have had an up and down season coming in with a 1-1 record in league play and 4-3 overall. Battle Ground is looking to pull a big home field upset over the Titans and even their league mark to 2-2. Union still has much of their destiny in their own hands but no doubt needs to run the table and can not afford to overlook this spy group from BG. If Union can win tonight and then knock off #4 ranked Camas at home next week that would likely create a 3-way tie with Union, Camas and Skyview with each beating the other.

Battle Ground needs a win to get to 2-2 and then hope for a 3-way tie for 2nd with Union and Skyview to see who comes out of the tie-breaker. Logan and Jeremy Hertner are on the call tonight and will have all the play-by-play action between the Titans and Tigers.

Both teams are really in must win situations to have a chance to significantly move up in the standings of the SPSL 4A. Sumner suffered a tough loss last week at Emerald Ridge and now sit in 4th place with a 4-2 record while the Lions are on a roll winning 3 in a row after starting 0-4. BP is now 3-3 in league with Sumner and Emerald Ridge in front of them. With 2 wins they would leap frog all the way up to 3rd place behind 5th ranked Graham-Kapowsin and 6th ranked Puyallup who both have wrapped up the top 2 positions.

Sumner gets BP tonight and then finishes with G-K so 2 tough games to finish with and all the momentum coming in to the game in the Lions favor. ESN’s Brandon Brown will be on hand to call tonight’s game.

This could be the game of the week with the Lancers trying to finish the regular season unbeaten, but visiting Kentwood is not far behind, undefeated in league with their lone loss at Mount Si 28-20. The Conks were expected to be a solid team but may have surprised some on-lookers with their performance so far but still is going to take a special effort to knock off KC.

The Lancers led by QB Sam Huard are ranked #1 and their offense remains as potent as it was last year but the difference in this team this year is how good their defense has become. They no longer just try to have the last possession in a game believing they could simply outscore teams. One of the teams they couldn’t outscore last year was this Kentwood squad. The Conks came in with a brilliant game plan of running the ball taking the air out of the ball and keeping all the incredible receivers in front of their defense and not allowing the big play. It will be interesting what kind of game plan Coach Michael Bush comes up with this year but expect something as the Conks no doubt believe they can be THE team to knock off the giant. Brandon Brown, Tanner Pierce and Jeff Mattarocci will be our crew for this huge showdown with a 5 o’clock kick-off at Highline Stadium in Burien.

Beginning with the SPSL 2A in the Mountain Division the Steilacoom Sentinels were one of the teams favored to make a deep run into the State Play-offs but first they need to take care of business in their league. It is down to a 3-way race and River Ridge can make it easy or they could throw a wrench into the Championship with an upset win over the number 8 ranked Sentinels. In this week’s Washington Poll by Evans Rankings Tumwater maintains the #1 spot followed by Clarkston, Lakewood, Hockinson, Lynden, AB Murphy, Franklin Pierce then Steilly. River Ridge due to some early non-league losses and tight 42-40 loss over Eatonville has them at #35.

The two teams know how to put points up the Sentinels have scored 275 points in 7 games averaging 39. The Hawks have countered with 221 a 31 point average and that’s after scoring only 20 points in the first 2 games in their last 5 games they have averaged 40. Look for these 2 offenses to light up the scoreboard tonight at South Sound Stadium on Fouts Field. Our Boradcast team is Tony Davila, Heather Beattie and Paul Beattie.

A taste of the offensive power for each team

This is the final week of the regular season for the NPSL 4A league and their 3 divisions. Next week are the cross-overs and the top 2 teams finishing in the Mountain and Valley Divisions will play each other but both are guaranteed a spot in the District Crossover the following week for a chance to go to State. Federal Way is 3-0 and a win away from securing that top spot when they travel to French Field tonight to face Kentridge. The Chargers are 2-1 and a win over the Eagles with a loss by Auburn-Riverside would give the top spot to Kentridge. If ABR wins it would create a 3-way tie for the Division Title.

The Eagles are 6-1 overall while the Chargers are 3-4 but it’s interesting both teams lost to Todd Beamer who currently in the basement of the Mountain Division with an 0-4 record and 3-4 overall. On paper the Eagles are favored but don’t sleep on these Chargers they could surprise. Our Broadcast team is Brandon Brown and Joe Withee.

The Rams finally got over the hump last week with a big win at Moses Lake after losing 3 Big 9 League games by a total of 15 points. This week at Davis they’d like to continue their winning ways. Davis still has a shot to make a run with 3 league games left they could finish as high as 4-2 and just see where they end up if they can run the table. The Rams only have 2 games left with the Pirates and finish against Eisenhower. With 2 late win the Rams could climb as high as 4th place and finish on a 3 game winning streak after the frustrating start to Big 9 play. Our crew as usual covering the Rams and Bucs are our friends from the Big Horn Network.

Fri Oct 25 , 2019
Papermakers escape scoreless second half with a 21-17 victory Story and photos by Dan Trujillo Just centimeters from taking a one-point lead in the fourth quarter, all Skyview could do was watch Camas run away with a fumbled football in front of the goal line and a 21-17 victory Thursday […] 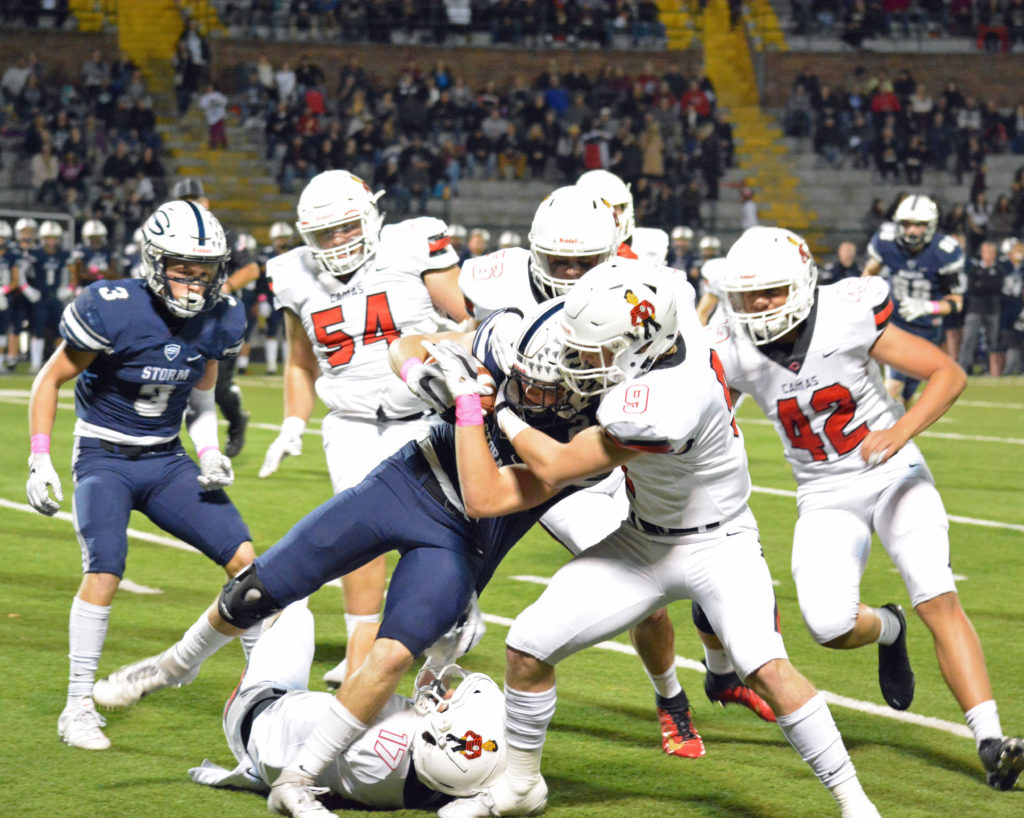