(Tumwater, WA) The Black Hills Wolves are flexing their muscles as this team is getting better and better each and every week. The Wolves do have a bit of a trend though that nearly bit them and that is falling behind early. In the first set they did play fairly evenly  until the Wolves pushed a 13-12 lead to 19-14 lead behind the serving of Brenna Nelson. They would end with the 25-18 win. In the 2nd set, Tumwater jumped out to a 5-1 lead but the Wolves would go on an 8-3 run to lead 9-8. Sage Foust and Katelyn Bonds doing the damage at the service line while Coletta Franklin and Addie Ainsworth were devastating at the net with great blocks and big kill shots. They would go on for the 25-18 win and take control 2-0.

Tumwater would not roll over and battled back winning the next 2 sets to force a 5th set. Tumwater again jumped our to an early lead behind the seving of Rose Foisy and Rachel Schultz. Black Hills did make a run to pull within one, 18-17 but the T-Birds did not give in and reeled off 6 straight points to secure the 25-18 win. In set 4 again the T-Birds took an early lead by as much as 8-2. This time the Wolves caught all the way up late at 19-19 but big defensive plays and strong net work from Leah Cairns and Ellie Bocksch pushed the T-Birds to the 25-22 win.

In the 5th and final set, the set was tied at 6-6 and 7-7 when Black Hills behind the serving of Foust and some big kill shots by Franklin gave the Wolves some separation they would never surrender pulling out the 15-12 win. Olivia Hisaw, Destiny Knight and Kailie Storm also had key points and solid performances for the now 5-0 Black Hills Wolves as they finished up the first go round of league unscathed. Tumwater was 4-1 followed by Centralia now 3-2 after knocking off WF West last night then the Bearcats at 2-3, Rochester 1-4 and Aberdeen at 0-5.

(Tenino, WA) The Tenino Beavers sent a stunned Bulldogs squad back to Montesano without as much as a single goal. The Beavers wasted little time when Morgan Miner popped in a goal just 2 minutes into the contest. The contest was supposed to be a test for the Beavers, it turned out to be a big one for the Bulldogs and clearly they were not ready for the up and coming Beavers. Coach Kevin Schultz was very pleased with his team’s effort and impressed how they handled taking on a team with the talent of Montesano.

Tenino stunned the Bulldogs with a quick 2nd goal in the 11th when Brienna Dell took a pass from Sarah Pogue to knock it in for a 2-0 lead. The Beavers added to their lead late in the match when in the 72nd when Dell scored her 2nd goal on an assist from Megan Letts for the 3-0 final score. The Beaver defense also played a big role with Keeper Abby Severse pitching the shut out with help from defenders on the back line of Alivia Hunter, Kathryn Fittinger, Andee Schaffran and Kayla Feltus.

The Beavers are now 5-0 in league and 10-0-1 for the season while Montesano drops to 4-1 and 8-3-0 overall. The Thorbeckes Players of the Game went to Tenino’s Morgan Miner and Monte’s Jaiden Morrison.

Thu Oct 17 , 2019
10/17/19 Friday, October 18 is gonna be a huge night in Football with several contests likely deciding league Champions. Below is a guide to our games on the air tomorrow night and other games you can watch with your ESN/NFHS Subscription. The cost is $10 and it’s good for 30-days. […] 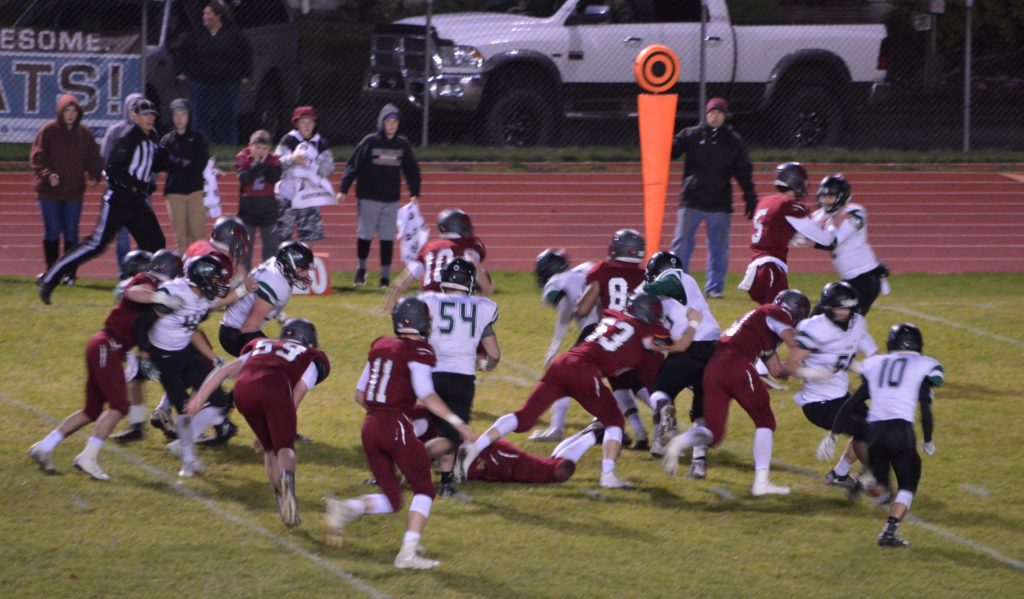