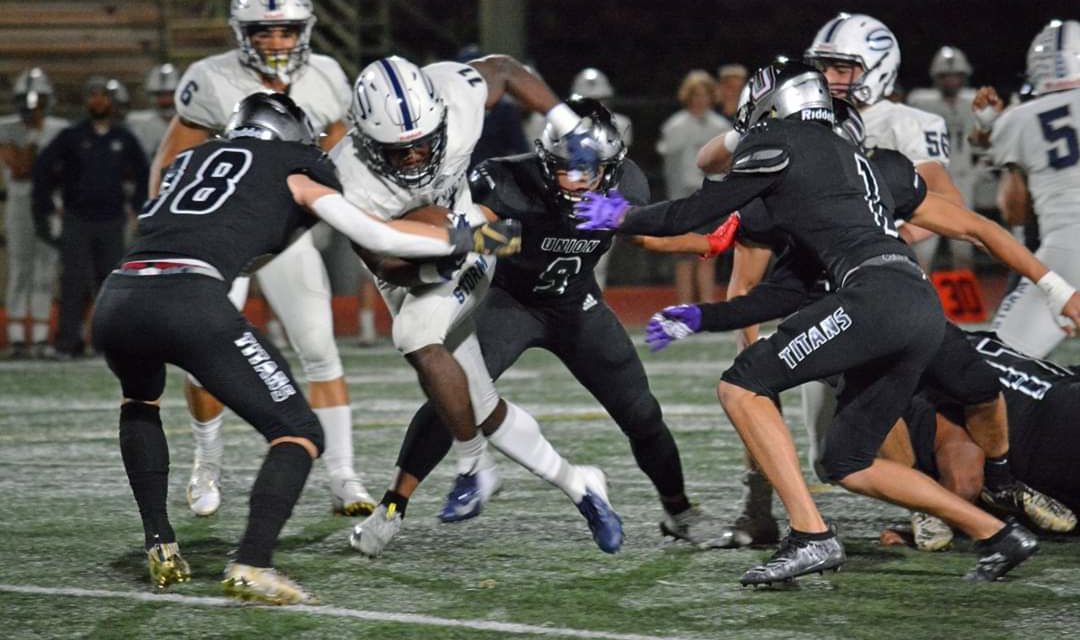 This football season is flying by and the games are getting bigger and more meaningful and week 6 began answering some of the questions. In the 4A GSHL there is little question of who has emerged and it is now officially a 2 horse race with undefeated Camas rolling to as 52-0 win over Sumner in non-league play and Skyview, now 4-1 on the year. The Storm passed their first test with an A+ pounding the defending state 4a champs Union 30-3. The game for the GSHL 4A is now set for Thursday, October 24 at the Kiggins Bowl.

In the PCL Bethel was looking for revenge at Lakes and get the first advantage in the likely 3-way race for the League Championship. The back and forth game came down to an injured long-snapper. Forks came to town sporting a roster with not one player over 200 pounds to take on Tenino on the Black turf in Evco 1A play on Saturday night. The Spartans were set for a brawl and got one in Tenino.

Below are the games aired on ESN this past week with results, stories, pictures, interviews and link. 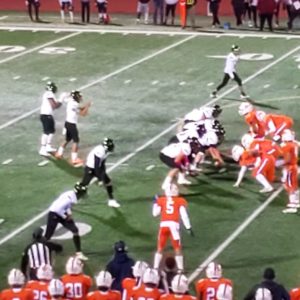 (Lakewood, WA) Bethel stuffed Lakes on the opening series and then returned the punt to the Lancer 27. A few plays later QB Kekoa Visperas ran it in to take a quick 7-0 lead. Lakes QB Justin Brennan matched his counterpart with a 6-yard scramble touchdown just 2 minutes later to pull within a point. The extra point however was no good which would become a theme for the Lancers.

Bethel would answer immediately with a big 43-yard pass completion from Visperas to Peter Latu down to the Lake 6. Will Latu would finish and it was 14-6.

Lakes would answer after a couple of series later when they returned the punt to the Braves 39. Brennan hit Tyler Mackay for an 11 yard TD catch. They went for 2 and failed and Bethel held on to a 14-12 lead.

The Lancers then took the lead after the Braves long snapper was injured earlier in the game and the back-up snapper delivered a low grounder to the punter and gave Jaydon McMillon time to get in and smother the kick and it rolled into the endzone where he jumped on it for the score. The Lancers went for but again missed but took the lead for the first time 18-14. The Lakes defense then forced a quick 3 and out and the Lancers took advantage of a bad punt taking over on the Bethel 30. Devon Nofoa-Masoe rumbled in from the 7 with 2:34 to play in the half to push the lead to 24-14 and it stayed that way with the 4th missed PAT of the night for Lakes.

Bethel then went to their trick play part of their play-book knowing they needed to shift the momentum back and came up with the double pass. Visperas threw a backwards pass to Puka Sokimi who then lobbed up a perfect rainbow pass to a wide open Cameron Parker who scampered in for a 61-yard connection and they would go to the break trailing by 3, 24-21.

Bethel received the 2nd half kick-off and took over on their own 22. As they neared midfield Peter Latu busted off a huge run of 51-yards and into the endzone but a penalty brought the big run back and took the 6 off the board. Unfortunately for Lakes it may have been better for the touchdown  to stand because the Braves would eventually finish off the drive anyway on a 7-yard TD pass from Visperas to Parker and re-took the lead 28-24 but more importantly they took 9:05 off the clock. 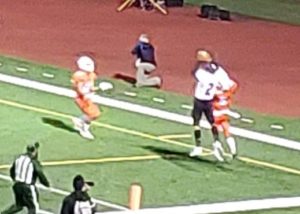 Lakes took their 1st offensive snap with just 2:44 left to play in the 3rd quarter. As they neared mid-field they faced a 4th and 1 and went for it but was stuffed by Mehki Frink just one of the huge tackles made in this game. Bethel got the ball back on the Lakes 46 and did not waste the opportunity as Visperas hit Sokimi from 13 yards out for the Braves 5th touchdown of the game and jetted out to a 35-24 lead.

After shutting down Lakes again Bethel took over on the 50 but Will Latu would have the ball punched out on a run and with 6:25 to play in the game got the ball back on their own 24. The Lancers moved the ball quickly and worked their way down to the 2 where big Howard Golden blasted in to pull within 6 35-30 and for the 5th time the Lancers could not convert the PAT. For the record 2 missed kicks and 3 missed 2 point tries.

Lakes needed the ball back and it looked like they indeed would get it back. They tried an on-side kick with 2:26 to play but Bethel recovered on their own 46. 3 plays later the Braves were facing a 4th and 6 with 1:39 to play. Bethel Coach Mark Iddins ran the clock down and took a time-out to what we thought was take as much time off the clock as possible and figured he’d punt it and give Lakes a long field where they would have to score a touchdown to win it.

What we didn’t know is that Coach Iddins was weighing the options of punting or going for it and not giving it back. It would seem like an incredible risk to go for it and possibly give it back to Lakes at midfield but that’s exactly the conclusion he came to as the best way to win the game. Iddins said they were down to their 3rd string long snapper and felt the odds of another poor snap which could lead to another blocked punt or simply a loose ball was greater than converting a 6-yard play get the first down and run out the clock.

Lakes clearly felt the Braves would punt and didn’t have a time out left were taken by surprise when Visperas dropped back to pass and it was too late to scramble and cover Peter Latu who grabbed the wide open pass and picked up the 1st down. Bethel went into victory formation and ran out the clock clinching the very important win.

It was an exciting back and forth, nip and tuck and it is funny the outcome was determined by 5 missed PAT’s and the availability of a long snapper. 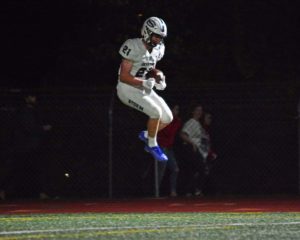 (Vancouver, WA) This was supposed to be a showdown with the winner set to face Camas for the League title but it turned into a runaway as the Storm drew off for the convincing win over the defending State 4A Champions. The Columbian’s Joshua Hart was at the game and has the full story here.

Video Highlight Skyview’s 1st TD as the Storm reach into the play-book for the double reverse pass for a 45-yard strike from Cooper Barnum to Gavin Baskette.

(Kent, WA) The Conks are focused on one thing and that’s the league title and week 6 is now a check mark with a big win over the Hornets. ESN’s Brandon Brown was on the cal of the game and he filed this report.

Kentwood had a dominate performance in a 42-15 win over Enumclaw on Friday. Quarterback Jackson Proctor threw for 2 TD’s and the defense forced five turnovers in the Conks big win. Kentwood also stayed right on the heals of Kennedy Catholic in the NPSL Mountain standings.

Jackson McCann ran the ball in from 6 yards out to give the Hornets an early 7-0 lead. That didn’t last long however, as Jalin Church scooped up an Enumclaw fumble and returned it 38 yards to tie the game up at halftime.

Kentwood certainly made the better halftime adjustments as they came out with back to back TD’s through the air. Proctor hit Alphonse Oywak for 23-yds and Dyllon Daniels for 40-yds, to give the Conks a 20-7 lead. Enumclaw would make it a one possession game thanks to another McCann TD, but that would be as close as they would get as turnovers doomed the Hornets. Two lost fumbles and three INT’s, one of which was a Daniel’s pick 6, were just too much to overcome on the road. Rushing TD’s by Akil Brown and Gabe Johnson finished it off for the Conks, as they ended up winning 42-14.

Jackson Proctor connected with Dyllon Daniels on a 40-yard bomb late in the 3rd to help push the Conks to a big NPSL win over Enumclaw.

The Loggers are firing on all cylinders setting up a Central 2B showdown with undefeated Napavine in Ony next Friday. Our Thorbeckes Players of the Game went to Ony’s Ashton Haight ansd the Mounties Brody Klein. LewisCountySports.com’s Aaron VanTuyl was at the game and has the full story here.

Ony’s Ashton Haight scores his 1st TD against Rainier as the Loggers powered their way to a big win.

Last year’s league Champs have fallen on tough times as a re-building Centralia squad got the Black Hills Wolves at Tiger Stadium. Matt Baide ffrom LewisCountySports.com has the full report.

The Centralia Tigers built a 25-6 lead but then held on to hold off the hard charging Wolves for a big Evco 2A victory.

The Rams continue to knock in the door but dropped their 3rd straight league game by 7 points or less. The re-cap is in the Yakima Herald Republic and you can find it by clicking here.

The Lightning were not hospitable hosts belting the Bulldogs by 60 in a non-league game. Our Players of the Game went to the Lightning’s Kieran Kershaw who was 8-11 passing for 129 yards and ran 6 times for 109. For the Bulldogs Reese Smelcer ran 18 times for 63 yards. The story is in the Yakima Herald Republic’s High School Football Round-Up.

Lighting Strikes! Axcel Valladeres powers into the endzone on a sweep for the first of many La Salle scores.

It was a Saturday night showdown on the Tenino Black Turf and both the host Beavers and visiting Spartans from Forks were looking for their first league win. The two teams each had their interesting issues coming in Tenino was missing their starting QB and both running backs were injured although Shawn Nicholson did play sparingly. This left the QB duties to Freshman Kysen Knox and all-around athlete Senior Paxton Russell. Russell was also the leading receiver for Tenino.

The Spartans came in to the season with just 1 Senior and not one player over 200 pounds and just 2 over 190. This young and scrappy bunch was ready prove that size isn’t everything.

The Beavers fumbled the ball on the opening drive  and was scooped up and returned for the touchdown  by Hayden Queen. Forks jumped out to a 14-0 lead when QB Carter Windle found Logan Olson wide open for a 43-yard strike. The Spartans added a 31-yard field goal with 1:47 left in the 1st from Ethan Bello.

Paxton Russell got the Beavers back in the game facing a 4th and short Russell on a keeper bounced it to the outside and was gone 61 yards for the score to make it 17-7. The 2 teams then  played to a stalemate for the rest of the first half and for nearly the entire 3rd quarter. Forks broke through with 3 minutes left when Windle snuck it in from the 2 to go up 24-7.

Forks added another score late in the 3rd for a 38-7 lead. Tenino scored on a big play when Knox found Nick Beckford and he was gone 75 yards for the touchdown but it would be to little, to late. Tempers had been bubbling up during the 2nd and 3rd quarters and it finally boiled over late in the game with a brawl. 2 players were ejected and the officials called the captains together for a meeting and to tell them nothing more would be tolerated.

Forks added a late score for the final tally and Forks improved to 4-2 while Tenino dropped to 2-4. Our Thorbeckes Players of the Game went to the Spartans Carter Windle and Tenino’s Nic Beckford. 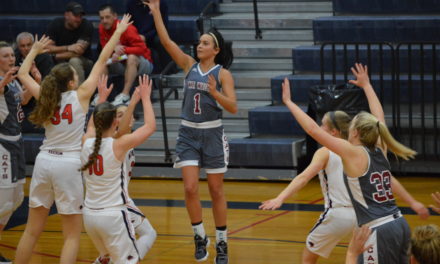 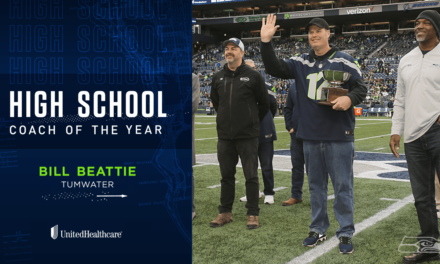