Emerald Downs: 4 Stakes including Final Mile Preview and “More Power to Him” Dazzles 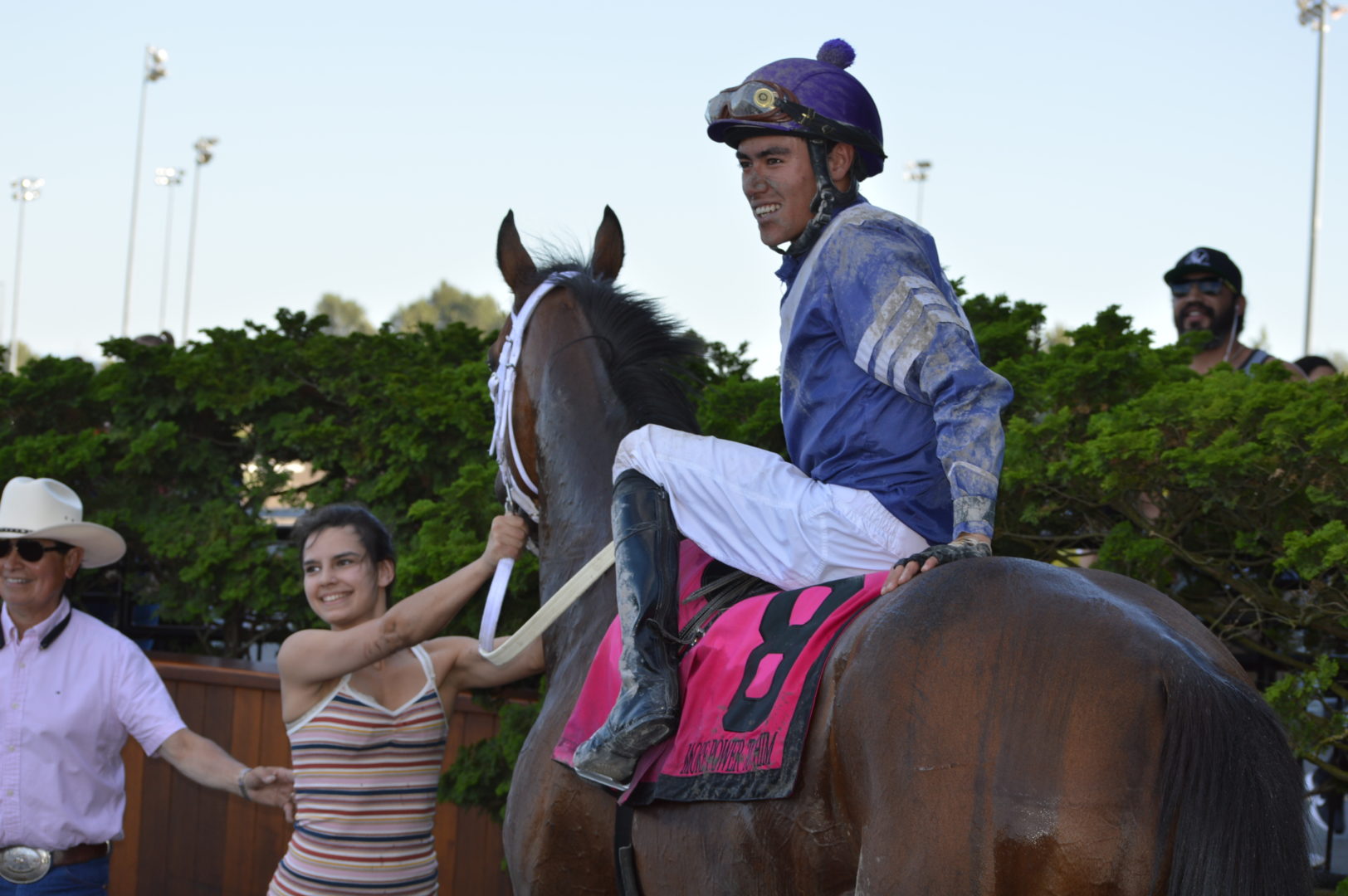 (Auburn, WA) The Mt Rainier Stakes was the crowning glory of this 4-Stakes race filled day. The 1 1/16 mile Mt Rainier was the final prep race for the August 11th Longacres Mile. The other 3 Stakes featured races for 2-year-old colts and geldings in the King County Express, 2-year-old fillies and mares competed in the Angie C and the girls also ran in the Boeing for 3-year-olds and up. Each race had a purse of $50,000 for a total of 200k in purse money distributed on the day. Below is a re-cap of each race with pictures and interviews from each race.

This race would have been totally different if Anyportinastorm had decided to run but trainer Blaine Wright was on record after Port crushed in the Bud Stakes that Port was off and going to be focused on the Mile. ‘Port would have been an over-whelming favorite had he started but instead his stablemate Oh Marvelous Me went off as the public’s 2nd choice. Marv was coming off 2 2nd place finishes to Port in the June 30th Budweiser Stakes and the June 2nd Governors Handicap.

Despite getting beat by Marv, the betting choice was El Huerfano with Agapito Delgadillo aboard. He went off as the 8-5 choice and Marv was 5-2. It appeared to be more of an wide open affair but the public was dead on, just not in the right order as it was the 3rd choice More Power to Him with Kevin Orozco up to run down the top 2 choices in the late going.

Orozco let the front runners take off in the mile and sixteenth race and settled back 2nd last in 7th. El Huerfano and Marv sat in mid-pack waiting to pounce on Concur and Many Roses  and when they hit the top of the stretch El Huerfano and Oh Marvelouos Me were locked in a nose to nose battle and looked like it would come down to which one got the head bob.

But it was Orozco who waited patiently and began picking off opponents on the far turn, but still looked like he was running for 3rd. Orozco kept him out of trouble swinging to the outside for a clear run at the 1/8th pole and surged past the tiring duo inside the 16th pole for a length and a half win and stopped the clock in a time of 1:42.62.

It was Orozco’s 2nd stakes win of the day and was quick to declare that he is ready to ride ‘Power in the Longacres Mile. ‘Power is owned by Brett Mason and trained by Faith Taylor. Taylor is based in Northern California and did not make the trip so Kay and Bryson Cooper saddled the winner for Taylor from their Homestretch Farms barn at Emerald Downs. ‘Power is a 5-year-old Cal bred by Slew’s Tiznow. During the Winner’s Circle interview Orozco looks like he  will get his wish and get to ride ‘Power in the Mile as Mason told Joe Withee the next stop is the big race.

The Boeing is race 3 of a 4 race Stakes series for older fillies and mares and a well matched 9-horse field also created another wide open race. The two previous winners of the series, Ima Happy Cat and Best of Me in the Hastings and Washington State Legislators Stakes respectively, were not entered in the Boeing.

The public did settle on 2 favorites and surprisingly made them overwhelming choices. Bella Mia went off as the 3-2 favorite and Dontkissntell as the 2-1 2nd choice but both would not pay-off to their many supporters. No Talking Back with veteran rider Scott Stevens surprised the field at 10-1 reeling in Paddy’s Secret in the final 50 yards to win by 3/4’s of a length. Blazinbeauty closed with a rush to just miss beating her stablemate for 2nd. Both Paddy’s Secret and Blazinbeauty are trained by leading trainer Frank Lucarelli.

But all eyes were on No Talking Back whose trainer Chris Stenslie says has been waiting for a good trip. She also thought the extra distance at a mile and sixteenth was good for her starter and praised the patient ride Stevens gave No Talking Back. Early on Stevens positioned the 5-year-old mare in 6th place while the favorite Bella Mia set the fractions. Turning for home there was a new leader in Paddy’s Secret but Stevens just kept put the pressure on and No Talking Back responded getting up late for the win.

The Angie C named after Emerald Downs’ founder Ron Crockett’s mother who was a staunch racing fan and supporter of racing and beloved by all who met her is a fitting tribute to Angie Crockett. The race was also fitting with 11 set to go and all with limited or no experience at all as the filly and mare series for 2-year-olds begins with the Angie C. #5 Windy Point was the morning line favorite at 3-1 and went off as the 9-5 favorite.

Trainer Howard Belvoir a long time and seasoned conditioner wasn’t about to be ignored with his entry For You Only. The 2-year-old filly by Abraaj and out of Slew Times by Slewdledo had been around the oval once finishing 3rd after leading to the stretch. Belvoir again wanted his regular rider Jennifer Whitaker to take her to the lead but Devilish Diva and Miss Prospector had different ideas as they sprinted out in a blazing 21-2 quarter mile.

Whitaker settled in 3rd about 3 lengths off the lead and when she swung for home let For You Only go and she easily held off a hard closing Windy Point by nearly 2 lengths. Windy Point’s rider Juan Gutierrez claimed foul on the far turn saying For You Only cut her off but the Stewards ruled that although tight there was racing room and the objection was not allowed. Devilish Diva held on for 3rd and Jaded Tiger completed the Superfecta.

For You Only races for the Pegasus Too Stable, Dixie Hitchcock and David Matsumoto and was bred by Nina Hagen. For You Only collected $21,780 and also got a Washington Bred WTBOA award of $2,500.

The King County Express Stakes kicks off the 2-year-old colts and geldings 4 race series and 8 went to the post. There were two 1st time starters in Northland Cable and Race Office. There were also two with wins in their early career, Reddy to Star and Coleinator. Show Me the Mints would end up going off at 3-5 with Jockey Kevin Orozco. Show Me the Mints was coming off a 2nd place finish in a Maiden Special Weight where he led all the way until inside the 16th.

Orozco did not disappoint the backers of Mints and again went straight to the lead. Orozco let the Washington bred 2-year-old gelding by Coast Guard go right to the front again but this time with a race under his belt he had plenty of wind to finish the job and pulled away to win by 4. Show Me the Mints is owned by the Billy Speed Racing Stable and trained by Frank Lucarelli. Mint was bred by Ron and Nina Hagen.

Haveulostyourmind closed from last to 2nd with Jose Zunino aboard at 9-1 and Brett finished 3rd with Herbert Martinez up at 7-1. Show Me the Mints collected $23,265 and picked up an additional $2,500 in a WTBOA bonus check.