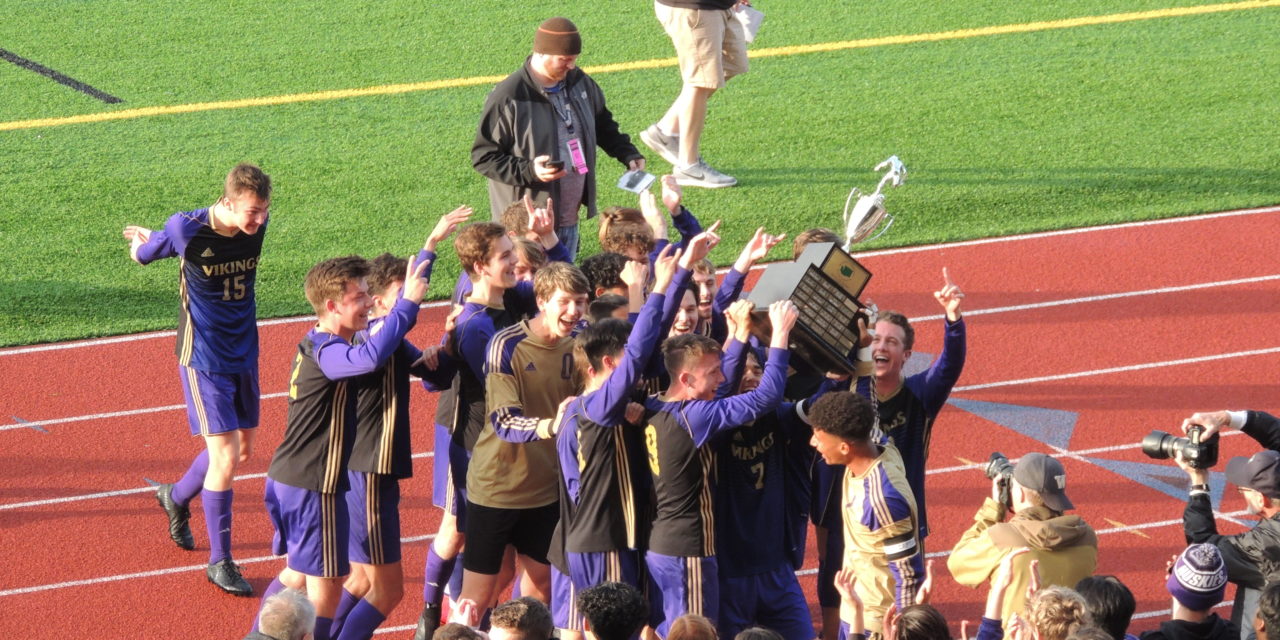 (Puyallup & Sumner, WA) The WIAA State boys Soccer Championships were decided over the Memorial Day weekend and ESN was there with live coverage which is all available on the NFHS website in their archives. The live video coverage is through a subscription but all of the archived games are free to everyone after 72 hours of the live event. To go back and watch any of the games you can do so easily by signing up fort a free account on the NFHS website and then start watching. For easy access to the NFHS website simply click on our “Watch Live” button on the schedule page and it will take you direct to the NFHS website.

The following are re-caps written by our new ESN reporter Dan Trujillo. 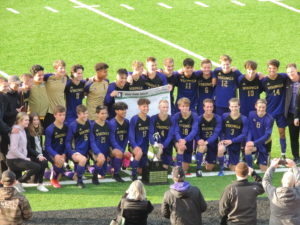 The Puyallup boys soccer team won it all on the leg of Logan Oyama.
The Pirate found gold on a free kick at the net in crunch time and Puyallup held on to defeat Mount Si 2-1 in the 4A state championship game Saturday at Sparks Stadium in Puyallup.
Sullivan Smith gave the Wildcats a leg up with a goal in the first half. Andrew Irby tied the score in the second half before Oyama delivered the game-winner.
Photo Gallery 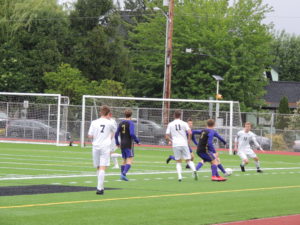 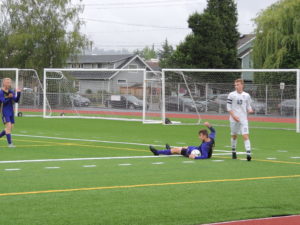 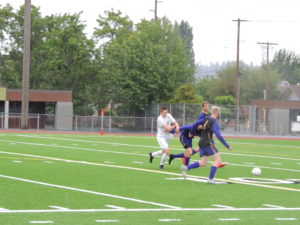 Jackson 2, Ferris 1 (7-6 PKs)
Jackson outlasted Ferries in an 8-man shootout Saturday to finish in third place in the 4A state boys soccer tournament.
Caden Martin scored the first goal of the game for the Saxons but Jacob Williams delivered an equalizer for the Timberwolves in the 52nd minute to force overtime.
Adan Fernandez, Oliver Giessler, Rochan Aminzadeh, Williams, Blake Edwards, Zachary Russell and Mohammed Ismail made their PKs for Jackson. Goalkeeper Justin Huttinger tipped the final shot by Ferris over the crossbar and out.

Puyallup 4, Jackson 0
Spencer Williams knows how to start a party for Puyallup.
His 45-yard goal in the 12th minute propelled the Vikings to a 4-0 victory against Jackson in the 4A state boys soccer semifinals Friday at Sparks Stadium in Puyallup.
Dane Halle delivered two goals for the Vikings and Craig Johnson chipped in with one.
Mount Si 2, Ferris 1
The Ferris and Mount Si boys soccer teams threw everything they had against each other, but the Wildcats prevailed 2-1 in the 4A state semifinal round Friday at Sparks Stadium in Puyallup.
LaQuan Crump converted a corner kick to give the Saxons a 1-0 advantage in the 25th minute. Mount Si tied the score in less than two minutes when Drew Harris headed in a cross by Joey Salem. Harris then fired a corner kick that Reed Paradissis turned into a goal to give the Wildcats the lead for good. 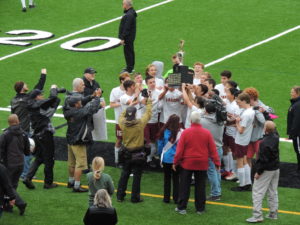 Lakeside 2, Bellevue 0
Two goals in the first half helped the Lakeside Lions beat the Bellevue Wolverines 2-0 in the 3A state boys soccer championship match Saturday at Sparks Stadium in Puyallup.
Justin Blachman got the Lions on the board with a goal in the 19th minute. Joe-Joe Richardson scored his third goal of the Final Four to give Lakeside some breathing room.
Photo Gallery 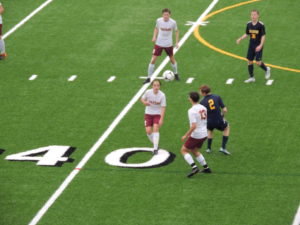 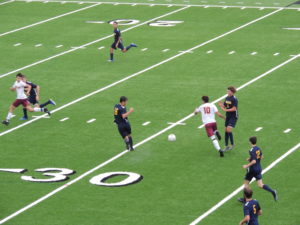 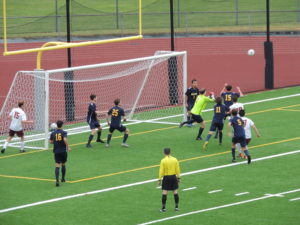 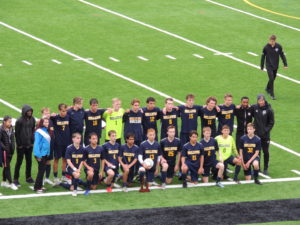 Interlake 2, Mountain View 0
Interlake defeated Mountain View 2-0 Saturday to finish in third place in the 3A state boys soccer tournament.
Luc Debaupte headed in a throw by Nick Peterson in the 23rd minute and the Saints took that advantage to the end game. Rahul Sehgal added an insurance goal in the final minutes.

Bellevue 2, Interlake 0
The Wolverines shredded the Saints 2-0 in the semifinals of the 3A state boys soccer tournament Friday at Sparks Stadium in Puyallup.
Ian Mahoney and Carson Wachter scored the goals for Bellevue, both on assists by Ryan Tobin. Interlake didn’t get a shot on goal until 60 minutes into the match. By then, Bellevue was in control.
Lakeside Lions 3, Mountain View Thunder 0
Joe-Joe Richardson delivered two goals and an assist to lead Lakeside to a 3-0 victory against Mountain View in the 3A state soccer semifinal Friday at Sparks Stadium in Puyallup.
The Lions scored all three goals in the first half. Richardson netted the first one on a PK in the 14th minute. Richardson then chipped in on Rafael Oreto’s goal four minutes later. Richardson found the back of the net again on an assist by Justin Blachman just before halftime.

Sehome 1, Columbia River 0
A sudden goal and superior defense helped Sehome capture the 2A state boys soccer championship with a 1-0 victory against Columbia River Saturday at Sunset Stadium in Sumner.
Julius Ellison scored the decisive goal for the Mariners on an assist by Ben Holroyd in the 33rd minute. Columbia River missed two shots on goal in the final five minutes and had a header hit the post in stoppage time. The Chieftains took one final corner kick, but Sehome goalkeeper Mason Kealy knocked it away.

Toppenish 1, Fife 0
Fife and Toppenish left everything they had on the soccer pitch Saturday to claim third place in the 2A state boys soccer tournament.
After battling for more than an hour and getting nothing into the back of the net, Jose Botello busted the dam with the goal in the 70th minute and the Wildcats dashed to the winner’s circle.

Columbia River 1, Fife 0
The defending 2A state champion Columbia River boys soccer team extended its winning streak to 45 games after a 1-0 victory against Fife in the semifinals Friday at Sunset Stadium in Sumner.
The Chieftains caught a break when a throw-in by Jackson Kleier bounced off a defender and sunk into the net to give River a 1-0 advantage in the 19th minute.
Fife tested the Columbia River defenders throughout the game but never broke through.
Sehome 2, Toppenish 1
Jon Gunn and Morgan Antico connected on a game breaking goal that helped Sehome beat Toppenish 2-1 in the semifinal round of the 2A state boys soccer tournament at Sunset Stadium in Sumner.
Julius Ellison netted a penalty kick to give the Mariners a 1-0 advantage in the first half. The Wildcats tied the score at 1-1 before halftime on a rocket shot by Luciano Martinez in the 37th minute.
Sehome regained control in the second half and finished strong. Gunn kept a loose ball alive in the corner, brought it back into scoring position and threaded the needle to Antico for a seam-popping goal with 25 minutes left in the game.
The Mariners are riding a 17-match winning streak into the state championship game.

Vashon Island 3, Winlock/Toledo United 1
Propelled by three big goals, the Vashon Island Pirates sailed to the 1A state boys soccer championship Saturday at Sunset Stadium in Sumner.
Tommy Delargy delivered two goals and an assist to help Vashon Island defeat Winlock/Toledo United 3-1. Bellamy Cox-Sitkiewicz added a header goal to give the Pirates a 2-0 advantage at halftime.
Down 3-0, Andreas Malunat netted a goal for United in the final minutes of the game.

Overlake 2, Lakeside 1 (4-3 PKs)
A diving save by Lucas Rohas gave Overlake the advantage in the shootout. Alex Martin then delivered the game winning goal to help the Owls defeat Lakeside 2-1 (4-3 PKs) for third place in the 1A state boys soccer tournament.
Roman Peterson scored the first goal of the game for Overlook in the 16th minute. Lukas Ousley tied it at 1-1 for Lakeside in the 61st minute.

Toledo/Winlock United 2, Overlake 1
The Toledo/Winlock United boys soccer team knocked off 2-time defending 1A state champion Overlake 2-1 in the semifinals Friday at Sunset Stadium in Sumner.
The Indians ended a 0-0 stalemate in the 49th minute when Andreas Malunat netted a free kick from 35 yards away from the goal. Roman Peterson tied the score for the Owls in the 71st minute.
United was awarded with a penalty shot just before stoppage time. Malunat fired the ball past the goalkeeper and the Indians regained the lead.
Overlake got one last opportunity on a corner kick, but United goalkeeper Allen Contreras snagged the ball out of the sky to save the day.
Vashon Island Pirates 2, Lakeside Eagles 0
Vashon Island will be playing in its first 1A state championship boys soccer game after shutting out Lakeside 2-0 Friday at Sunset Stadium in Sumner.
Tommy Delargy scored the first goal for the Pirates in the 12th minute on an assist by Fredy Guitierez. The Eagles had a few opportunities to tie the score in the second half but couldn’t convert. The Pirates picked up an insurance goal in the game’s final minutes on a penalty kick. 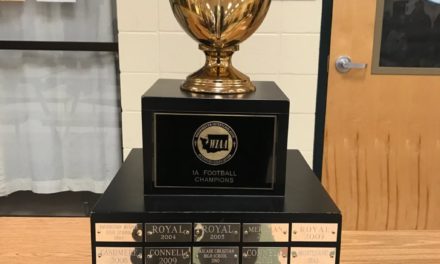 2B Championship Preview: Redemption for Liberty? Not if Kalama can help it 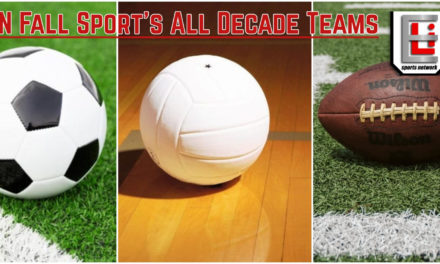 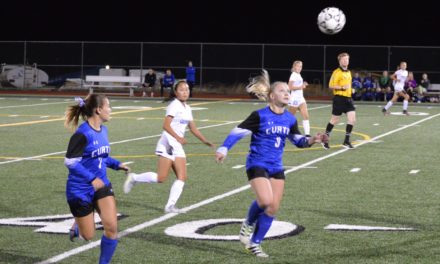 Girls Soccer: Big 2nd half for Curtis keeps the Viks unbeaten with 3-1 win over Bears 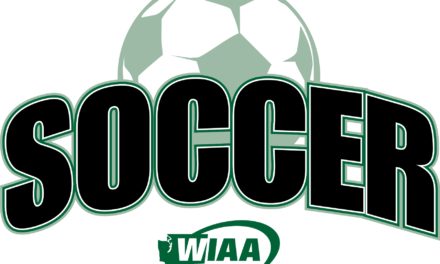