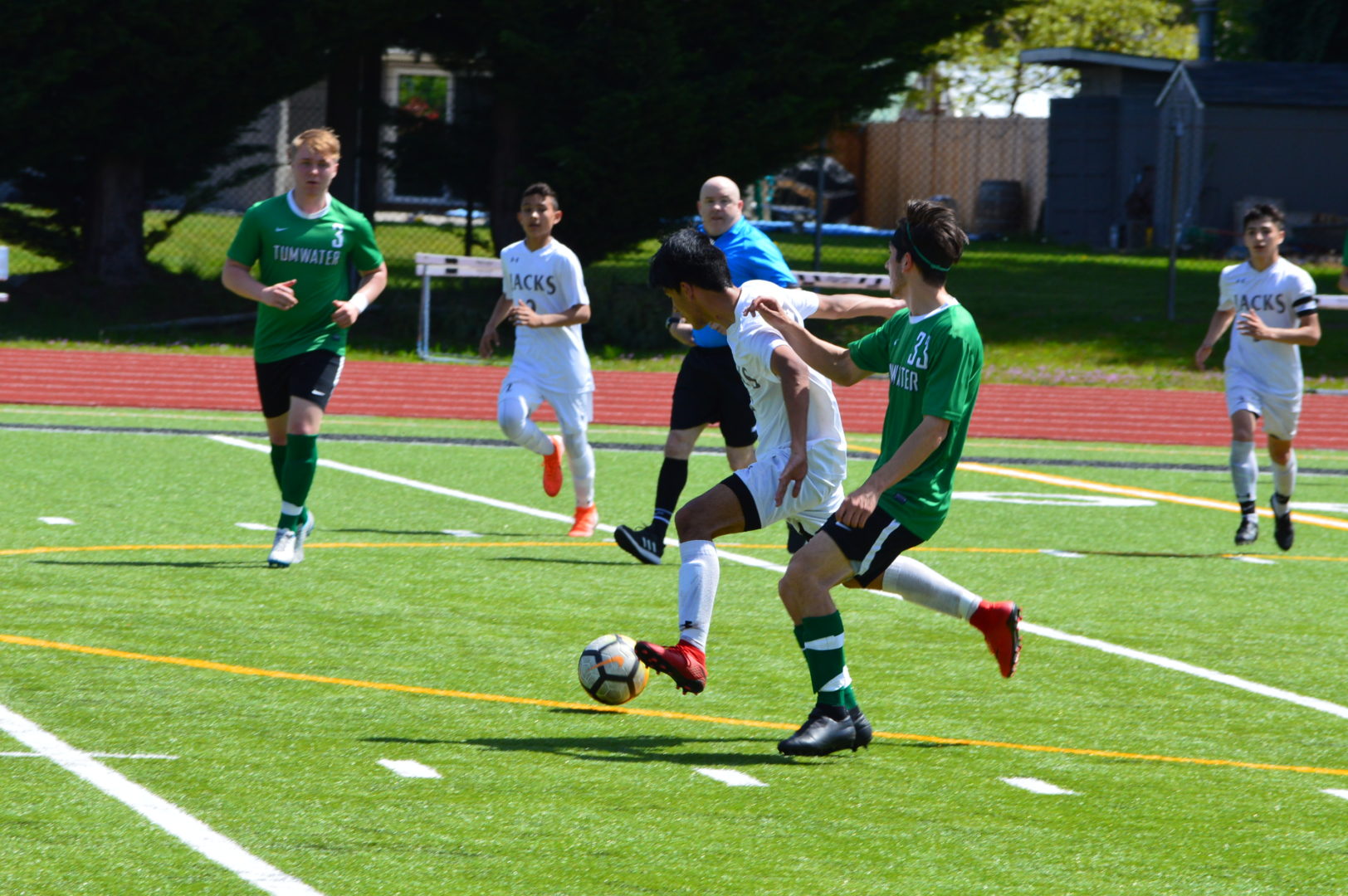 The District 4 Soccer Tournament kicked off Saturday afternoon with 4 matches. Winner’s moved on to the Semi-Finals and losers dropped into the consolation bracket. The game re-caps are below in the order they were played.

(Tumwater, WA) The T-Birds dominated the first half but couldn’t find the back of the net. Shots went off the crossbar and side post and some great saves from Lumberjack keeper Juan Reyes were all key to going to the break 0-0. Tumwater came out in the 2nd half knowing they had to capitalize on their opportunities and in the 52nd minute scored when Chandler Stuart took control in the middle of a scramble in front of the net and punched it in. Austin Mikesh then added to their lead with that insurance goal in the 65th on a free kick that floated high over the defense into the right side of the net and it was 2-0 and looked like the T-Birds could cruise to the win.

The Jacks did not give up and they got back in the match in the 71st when Riki Vaquez-Bracken punched in the goal and it was now 2-1 with time to find the equalizer. RA Long had about 8 and half minutes to get the job done and they needed every single second of the remaining time to push the match into overtime. Emmanuel Alvarez turned on a ball inside the 18 and fired it home and scored to even the game at 2-2. On the ensuing kick-off as soon as the ball was touched the referee blew the whistle ending regulation. The two teams would head to 2 5-minute golden goal overtimes in which neither team scored so the match went to a shoot-out.

Believe or not the Shoot-out featured a similar come-back as regulation except this time it was the T-Birds. Tumwater fell behind 2-0 but came back to tie it 3-3 after 5 rounds which meant there would be 1 additional round continuous until the tie was broken. It was 5-5 entering the 8th round and the Jacks kicker Martin Radillo fired the shot but T-Bird back-up keeper Zach Dodge smothered it setting up Tumwater to take their 8th round shot for the win. Isaac Morgan stepped up and fired it past Reyes for the game winner and the T-Bird sideline exploded.

Dodge stepped in to take on the goal keeping duties from sophomore Caden Fine. Fine

Tumwater advances to the semi-finals and will play Woodland on Tuesday at Tumwater with the winner heading to the District Championship and to the State Tournament the loser will drop into the consolation bracket. RA Long will now play at Aberdeen in a loser out contest also on Tuesday night.

(Woodland, WA) The Beavers took a 1-0 lead in the first half and that score would hold up for the win. Woodland travels to Tumwater on Tuesday in the District Semi-Finals, Aberdeen will host RA Long in a loser out.

Game Story in The Daily World

(Vancouver, WA) The defending State Champs served notice they are not ready to give up their title anytime soon and rolled in their district opener against the Bearcats. CR will host Centralia Tuesday night in the Semi-Finals in a winner to State and the District Championship and the loser to the consolation bracket.

Game Story by Micah Rice in the Columbian

(Centralia, WA) This match was going to be a rough and tumble match from the beginning and both teams came out physical trying to control the pace of the game. Ridgefield avoided a couple of early shots by the Tigers and then sent one of their own to the back of the net in the 13th minute. Israel Hernandez sent a pass to Andrew Poppert who fired it past Tiger keeper Victor Rojas for the 1-0 lead. The two teams battle back and forth for the rest of the first half but neither could break through so the match went to the break 1-0 with a Spudder lead.

The two teams picked up where they left off as they pressed the high energy pace back and forth Centralia would find the tying goal in the 59th minute. Mario Silva set the play up lobbing a passing shot to Julien Velasquez who then powered a shot by Joe Lindbo to tie the match at 1-1. The two teams could not break the stalemate in regulation forcing overtime. The two teams play 2 5-minute golden goal overtime periods and the first team to score wins. If no one scores then they go to a shoot-out.

Unlike the overtime game in Tumwater that went to 8 rounds of a shoot-out this match came to an abrupt end in the 1st minute of the 1st overtime when Velazquez struck again. Alex Alvarenga fired a shot on goal but Lindbo was able to punch it out but unfortunately for the Spudders the deflection went right to Velazquez and he punched it in with no time for Lindbo or the Ridgefield defense to react for the game winner.

Centralia now heads to Vancouver  with the mighty task of taking on undefeated Columbia River. The winner heads to state and the district title match and the loser drops into the consolation bracket.

WIAA Spring Championships: Which was the MOST Dominate or Impressive Performance?