Tuesday was a triple header of GSHL soccer and our coverage of all 3 stories is in order of how they were played. Also check the photo Gallery and Video Highlight below. 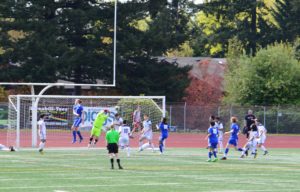 (Vancouver, WA) The 8-0-1 Thunder already had everything wrapped up, the league title and #1 seed into the district tournament when they took on the 4-4-1 Kelso Hilanders who were sitting in 3rd place and a win for them would clinch 3rd place and the final spot into districts.

Mountain View started all their seniors and they did a great job of holding sway keeping the game scoreless through the first 20 minutes. In the 21st the Thunder would take the lead on a corner kick that bounced around in the crowd and Nathan Purvis got his foot on the ball to punch it past Blake Sweider Hilander keeper to make it 1-0.

The Thunder added another goal in the 31st when a ball that was sent high into the air was picked up by Josserick Messina and he popped it in for the 2-0 lead that would hold up to the halftime break.

In the 2nd half Purvis struck again just 5 minutes for his 2nd goal giving the Thunder a 3-0 lead. Kelsothen lost their keeper Sweider to an injury and Carlos Cruz had to step in the box for the Hilanders. Kelso then got on the board in the 51st on a break away that saw Angel Hernandez get on the ball and knock it in to make it 3-1. Hernandez would score again in the 68th minute this time with an assist from Sebastian Valencia but the comeback would end there.

Mountain View is the GSHL 3A Champions with a 9-0-1 league record and Kelso finished 4-5-1 and had their season come to an end when Evergreen beat Fort Vancouver in the following game, see our story below. Our Players of the Game for Mountain View Nathan Purvis and for Kelso Sebastian Valencia. 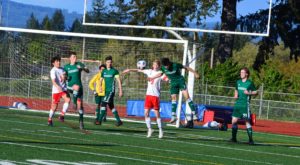 (Vancouver, WA) It was a simple game plan for the Plainsmen of Evergreen…win. A win Fort Vancouver and the Plainsmen would clinch 3rd place and the final spot to the district tournament. Evergreen also got a boost with the return of Elijah Lavin from the injury list. Lavin scored 22 goals last season for Evergreen but broke his foot on the day before the first match of this season and this would be his first match of the year. Evergreen Coach Keenan Burris was glad to have him back but honestly didn’t know how long he could go and how good he would feel on the field.

Well the answer to that question would be answered quickly when Lavin scored in just the 13th minute and did s with the urging of his team mates who encouraged him to shoot. Evergreen’s Oscar Carillo-Gonzalez then gave the Plainsmen a 2-0 lead with an impressive free kick from just outside the 18 that hooked right in over the top of Trappers keeper Mario-Juarez-Cruz to make it 2-0 19 minutes into the match. That score would holdup to half time.

In the 2nd half Lavin would take control and put the match away and the found the back of the net just 4 minutes in with a beautiful header into the right side of the net. That pushed the core to 3-0 and then Lavin would wow the crowd with an unbelievable bicycle kick right in front of the box off a tipped up ball from the Trappers. The play started with a corner kick from Saul Castaneda for the Plainsmen and delivered a low line drive that bounced off a Trapper defender setting up the crazy bike shot from Lavin and into the net for the 4-0 lead which would end up being the final score. (See highlight below.)

Evergreen will now play in a loser out District match on Saturday advancing as the GSHL 3A 3rd seed and finishes the regular season with 4-5-1 record. It’s not hard to see that Evergreen just may have finished further up the standings is Lavin was available for the entire season.

Fort Vancouver had a solid season and look for them to take another step forward next year under then 2nd year Coach Rob Cowles who saw lots of improvement over the season and they finished with a 6-8-2 overall record. Our players of the game went to Elijah Lavin for Evergreen and for the Trappers Darius Scheer. 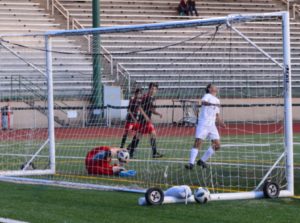 (Vancouver, WA) The GSHL 4A league title was on the line and the 5-2-0 Skyview Storm had the advantage over the 4-2-1 Union Titans because they could take the top spot with a win or a tie while the Titans were in a must win.

The first half was filled with plenty of action between the 30’s neither backline were in the mood to give much ground. Union had a couple of chances but Storm keeper Dylan DeBaldo with his defenders denied the Titans. The same was true for the Storm who could not get one past Union keeper Christian Alcorn. The Storm had and on goal shot but Alcorn laid out and punched it away and they went to the break all even at 0-0.

The 2nd half the Titans scored 3 times but Skyview won the match 1-0. Sp how does this happen? the answer 2 off-sides and an own goal. The Titans thought they had tied the match up in the 54th when Arthur Jeanmarie knocked in a shot. The Titans celebrated, the score keeper put the 1st goal of the match on the board and we began to tweet out the score when Skyview’s DeBaldo lined up for a goal kick and we scrambled to figure out why the goal was apparently disallowed. What we didn’t see was the official talking with the side AR and they then deciding there was an off-sides and the goal was taken down. We speculated on what happened but thanks to the Columbian reporter Joshua Hart who was on the sidelines tweeted out the off-sides decision.

Then disaster struck for the Titans who needed to win to capture the League title, a tie would not be good enough and force them into playing 2 loser out games to get to state while the league champs play 1 loser out game and if they win advance to the state tournament. In the 63rd minute technically Nino Fergoglia for Skyview fired a passing shot into the box but a Titan defender stepped up to head it out when it ricocheted off the defender backwards and was pushed into the net and Skyview took a huge 1-0 lead.

Remember, Skyview needs only a tie and now with less than 17 minutes to play Union had to score twice to get the win. If Union could score quickly maybe the momentum that they had been building despite the off sides and despite the own goal it felt like Skyview was hanging on and Union was bearing down with several solid attacks on the Storm defense and it looked again like Jeanmarie would tally a goal in the 68th minute but again this time there was no discussion but the off-sides flag was up and the goal not counted.

Union would not give in and kept the pressure and yet another shot late in the match would clang off the side post but the clock was the enemy of the Titans and it ticked down to 0 ending the match and Skyview doing what they had to do to take the league championship.  Skyview will on May 9th in a loser out, winner to state match against the #4 seed from the South Puget Sound League which is now a 3-way tie and their final match is on Friday. The loss was double hurtful for Union as it dropped them to 4-3-1 and tied for 2nd with Heritage. Heritage will get the 2nd seed by tie-breaker and Union drops to the 3rd seed. The Titans will now play on May 7 in a loser out match against the North Puget Sound League #8 seed. Heritage will play on May 9 in a loser out against the #4 seed from the NPSL. Both Union and Heritage will have to win back to back loser out matches to qualify for the State Tournament.

Our Players of the Game in this one we could not get past the defensive effort by both defenses and keepers and we are not going to hold the own goal against Union keeper Christian Alcorn so he and Skyview’s keeper Dylan DeBaldo will earn our Pacific Sports Spa Players of the Game.

Soccer: United completes goal 1, now on to the next after 12-0 League finish

Sat May 4 , 2019
5/3/19 United 3, La Center 0 (Winlock, WA) It was a bittersweet night for team United and their 12 graduating Seniors and Head Coach Horst Malunat. For all 13 this would be the final league match in their High School careers and final league match for Coach Malunat who is […] 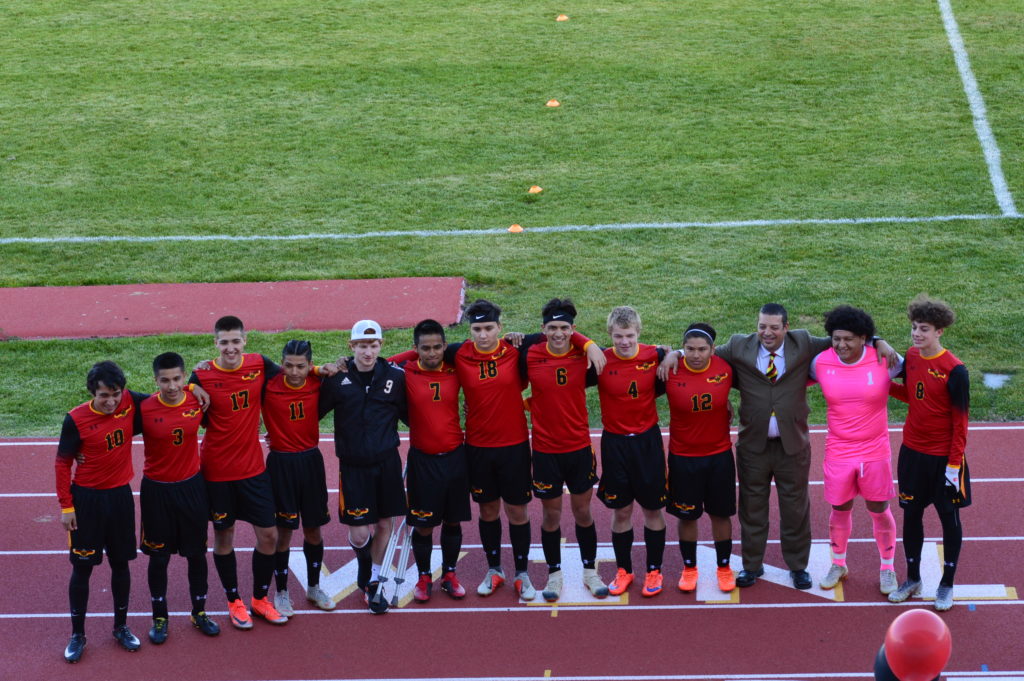