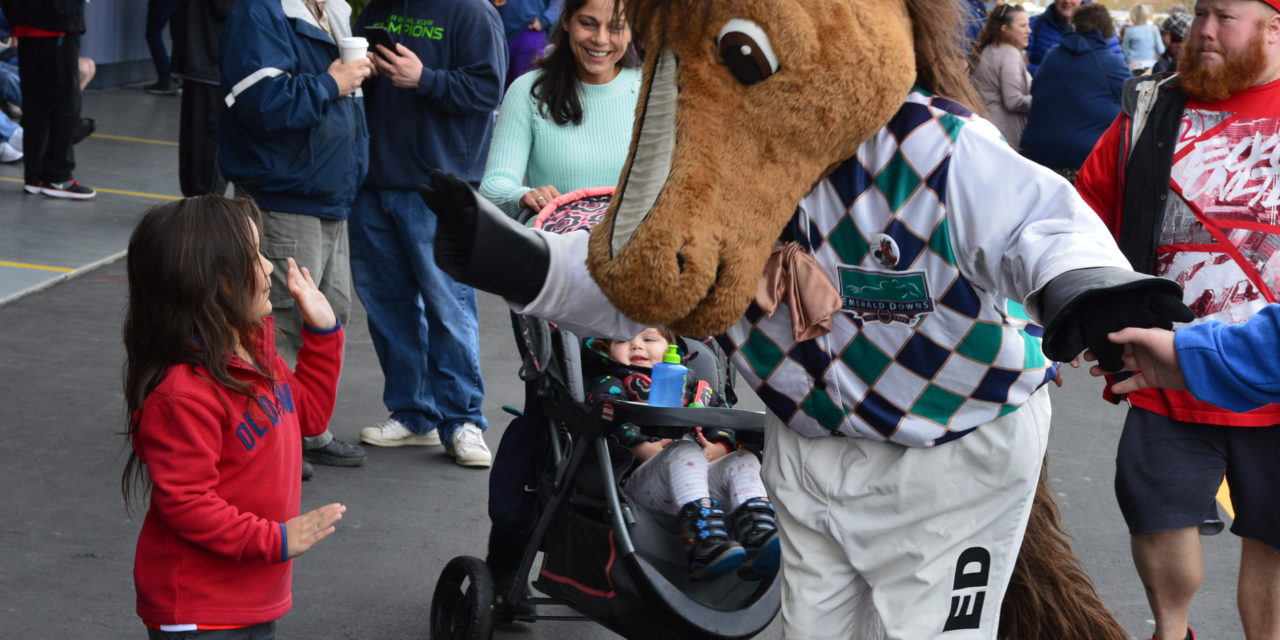 (Auburn, WA) It’s hard to believe this is the 24th year of racing at Emerald Downs in Auburn  and it got off to a  great start with 9 races on  the opening day card. The betting crowd was rewarded in the opening race with 2-1 favorite Tumac Mountain getting to the front and never looking back. 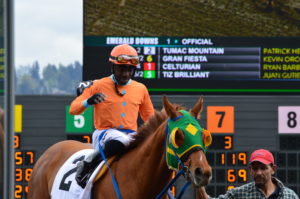 Jockey Patrick Henry Jr says the win was a great relief just getting your first win under your belt. Henry also won the opener last year, his first season  at Emerald. Henry says the track is playing great and getting out on the lead was right where he wanted Tumac Mountain to be from the gate. Gran Fiesta ran 2nd with Kevin Orozco up and Celturian completed  the trifecta with Ryan Barber aboard.

The 4th race was the first feature race of the day, the Don Miller Memorial Race in honor of the  Emerald Down starter who passed away last Fall. The race featured a group of inexperienced 3-year-olds and one of the 1st time starters took the lead shortly out of the gate. Lulu’s Lightening with jockey Gary Wales aboard quickly overtook Suddenly Awesome and from there the 2 horses dueled without really being challenged by the rest of the 8 horse field.

It appeared Suddenly Awesome may have Lulu measured at about the 1/8th pole but Wales says he felt plenty of horse left in the young filly and she held off Suddenly Awesome for a 1/2 length win. Both horses were turned away by the betting public as Lulu’s Lightening went off at 7-1 and Suddenly Awesome, who took some early money and bet down to 5-2 but trailed off and hit the board at 8-1. The 2 combined for a $63 exacta pay-off. 1-1 betting favorite Lady Campbell finished 3rd and the 50-cent trifecta returned $71.

Lulu’s Lightening races for the How We Roll Stable #6 and is trained by Steve Bullock. Lulu is by Harbor the Gold and out of Ms Melange and is a Washington bred by Debra Gruender. 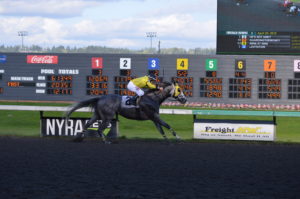 The 2nd feature race of the day was  almost a carbon copy of the Don Miller, Gary Wales once  again  took an early lead on “He’s Not Grey” in the Muckleshoot Casino Purse. He’s Not Grey was joined on the front end by Guarding the Money, Levitation and betting favorite Wine at Nine. but none would ever put their head in front of He’s Not Grey. Wales says Grey broke perfecly and had plenty down the stretch to keep the closers at bay winning by 2 lengths.

Sitting  well off the pace was Bob’s All In and he and jockey Kevin Orozco had plenty of front speed to chase down and Bob ran them all down but the winner to finish a fast closing 2nd. Guarding the Money with Juan Gutierrez held on well to be 3rd at 30-1.

Owner John Parker was asked after the race by Emerald Publicity Director Joe Withee how the shining Gray coated 4-year-old gelding got his name and Parker said he was looking for a Gray horse to add to his large stable and was told this horse was gray but Parker said he was red and state “He’s Not Grey”. Breeders from Eagle Ridge Farm said he would end up gray and that is how he got his name.

Trainer  Candi Cryderman said Grey was so red  they called him Clifford after the children’s cartoon character Clifford the Big Red Dog. Cryderman says they still call him Clifford around the barn area. He’s Not Grey covered the 5 and half furlongs in 1:02:3 and returned $8.60 to win. The $1 exacta paid $44 and the 50-cent trifecta returned a healthy $186. He’s So Grey is a  California bred by Slew’s Tiznow and out of Obligated. 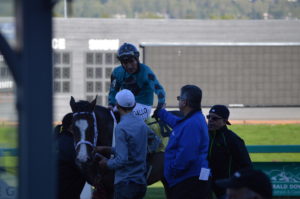 Veteran Trainer Frank Lucarelli had a big opening day winning 33% of the 9 races getting his picture taken 3 times. Lucarelli won the 3rd race with Hejustkeepsgiving and new to Emerald Downs jockey Franklin Ceballos. Lucarelli’s Das Bear did not disappoint the many bettors who made him a 3-5 favorite winning easily with Kevin Orozco in the 5th and then finished the day for the hat trick and 3rd different jockey in the 9th when Flat Out Fine laid just off the pace and won going away as the 9-5 favorite to end the 1st day of racing.

There are several first time jockey’s in the Emerald Downs colony but missing a familiar face, 3-time jockey Champion Rocco Bowen. Bowen is still recuperating from a shoulder injury and is likely  several weeks away from returning. Another familiar face is likely to return as he has for the past several years after Golden Gate finishes, Julien Couton. 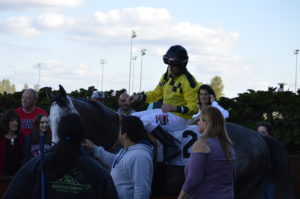 Gary Wales aboard his2nd winner of the day

This could open the door for someone else  to top the standings for the first time since 2016 and Kevin Orozco is the early favorite. Orozco finished 2nd in the standings last year to Bowen after a fantastic apprentice season in 2017. Orozco got off to a solid start with 1 win and 2 2nds from 8 mounts on opening day. Gary Wales and Patrick Henry Jr each won 2 races as theonly multiple win jockeys and are tied for the lead. Winners included Henry Jr who won the opener, Jose Zunino took the 2nd, Franklin Cebellas the 3rd, Wales the 4th, Orozco the 5th, Henry Jr the 6th, Jorge Carreno the 7th, Wales the 8th and veteran Javier Matias the 9th race.

The track was fair with horses winning from going right to the front, to deep closers and those who laid just off the pace. The high win pay off was 15-1 shot Party for One in the 7th  returning $33.20 and the low pay-off was odds on choice Das Bear  in the 5th for  $3.40. The high place pay-out was Alittlelesstalk in the 6th race for  $18.60 and the high show return was in  the 8th race Guarding the Money for $11.00.

The day was a good betting day with the first good sign that a single long shot didn’t sweep the high pay-off in the across the board bets. The average win pay-off was nearly 5-1 at $11.80, place  bets returned $6 or 2-1 and the average show pay was a little more than 1-1 for a strong $4.20 pay-off so it was a great day for show parlay players.

The highest $1 exacta pay-off came in the 7th race when longshot Party for One won it and betting favorite General Mach Four ran 2nd for a $67 return. Exacta’s remain a favorite for many bettors likely due to the simplicity in understanding the bet and how to bet  it. It was a good day for exacta players with the average  return of $33.60. I go back to the old Longacres days to determine a good return when they only offered a minimum $5 bet exacta in the final race of the day. Those returns had to average more than $200 and yesterday’s average was $168. The good pay-offs also include a remarkable $11.20 pay-off where 3-5 shot Das Bear won but got a healthy 9-2 on the exacta with 4th favorite 9-1 Tizwayorthehighway finishing 2nd.

Racing resumes next Saturday and will be limited to Saturday’s and Sunday’s until after the Kentucky Derby, the first Friday night racing is set for May 10. 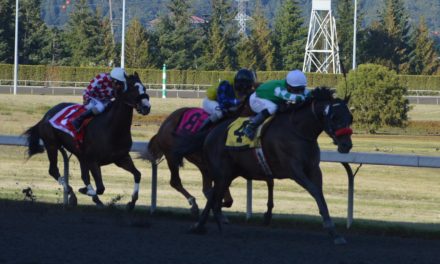 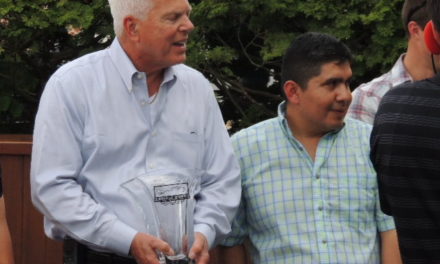 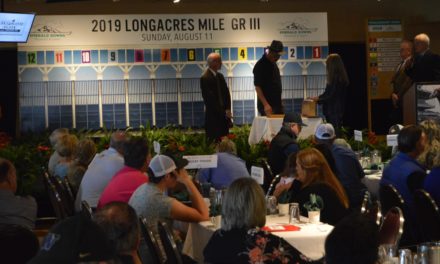 Emerrald Downs: Longacres Mile set to be a contentious battle, plus 3 other Stakes set for Sunday 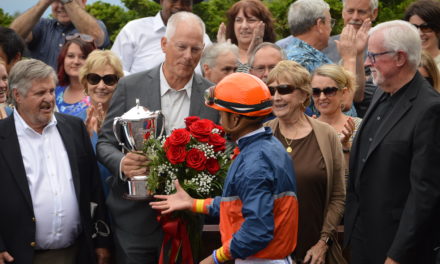