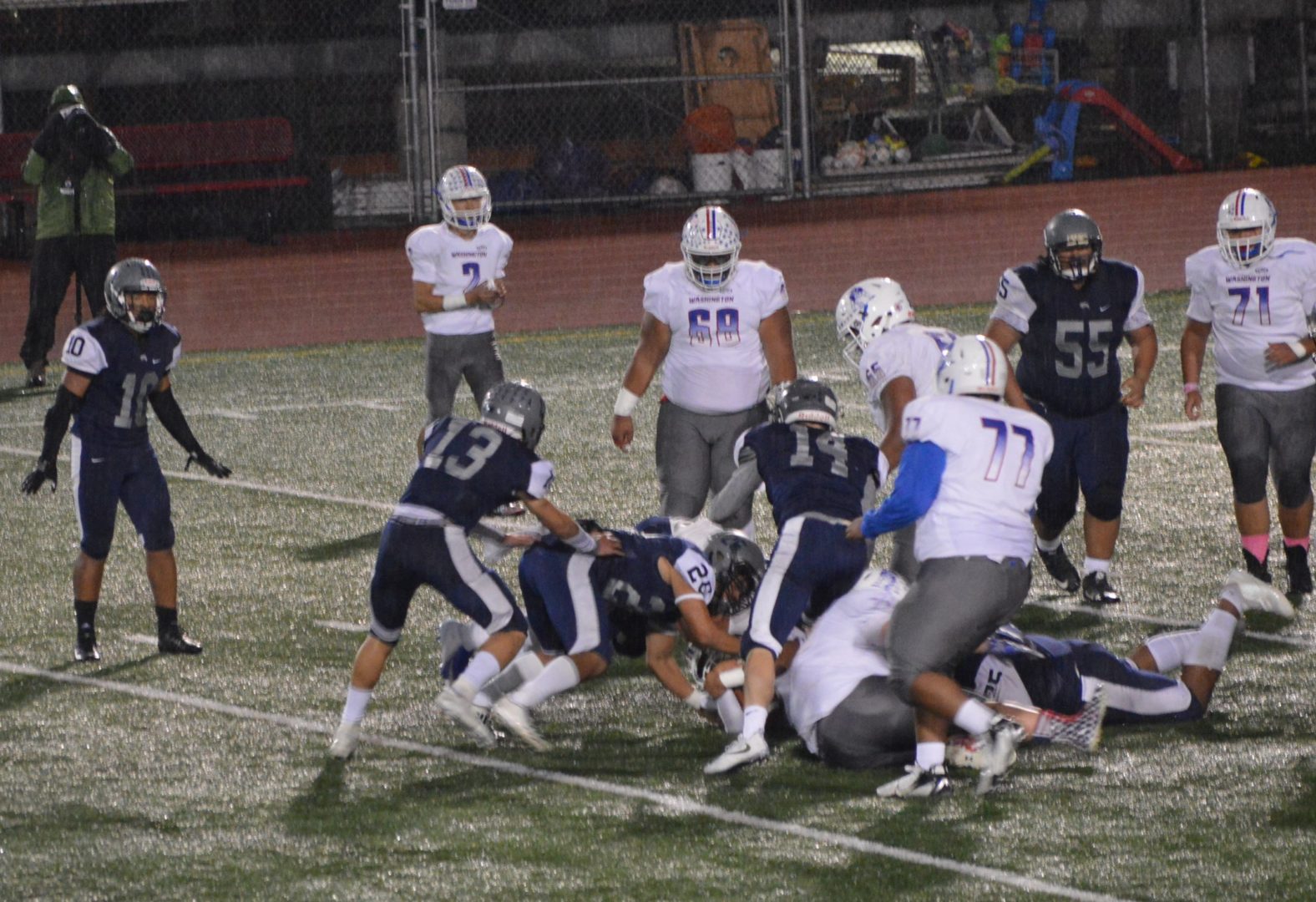 (Lacey, WA) The River Ridge Hawks wasted little time in trying to put the run heavy Patriots on their heels when QB Jevon Brown tossed a 44-yard touchdown pass to a streaking Dante Owens on the 1st play from scrimmage. Jacob Miller added the PAT and it was 7-0 in the 1st 17-seconds. The Hawks took advantage of the first of 2 Lamar Campbell interceptions and began a 10-play TD drive capped off by an 8-yard pass from Tomasi Manu to Owens. Manu was called into action after Brown left the game with an injury and would not return.

The Hawks finished off the scoring in the 1st half with a spectacular, yet controversial, punt return. Mind you there was nothing wrong with the punt return by Kieran Hunkin who hauled in the Patriot kick around the 20 yard line and went straight up the middle of the field then  cut to his left toward the Hawks sideline and went the distance for the score. The PAT hit the side post and was no good making it 20-0 with 5:35 to play in the half. So what made this play controversial? It should never have happened. The Patriot were penalized twice on the drive and were forced into what was a 2nd and 31 but the down marker was flipped to 3rd down. The Patriots then ran another play that was stopped well short and the down marker flipped to 4th down when it should have been 3rd and despite the Washington crowd screaming at the officials it should be 3rd down the officials seemed oblivious to the mistake and Washington punted the ball.

Despite the officiating blunder and the TD result teh Patriots offensew just never got on track and it was fortunate the mistake really did not impact the end result. River Ridge’s defense took away the Patriots main offensive threat running back Joshua Camacho holding him to just 26 yards in the 1st half and 0 yards in the 2nd half. They also limited the air attack of Kobe Andrews who the game completing 5 passes for 76 yards and 2 interceptions. Washington finished the game with just 130 total yards.

River Ridge did not put up spectacular numbers at least the most common numbers but they also took advantage of the opportunities given by the Patriots. They would finish with 295 yards but add in a huge run back on the opening kick-off and the punt return and you could add more than 120 yards to the total and the 400+ yards is impressive. The Hawks sealed the game with 2 4th quarter scores when Hunkin scored his 2nd TD with a 4-yard plunge and back-up RB Darion Brown ran it in from 28-yards as time was ticking down and just 1:19 to play in the game.

The good news for the Patriots is they will advance with River Ridge to the District crossover next week. The Hawks will go into the crossovers as the 5th seed and Washington the 6th seed. Those games are loser out and winners to state games. Our ESN Players of the Game went to the Hawks’ Tomasi Manu and the Pats” Braxton Seaich. Seaich was responsible for literally all of the Patriot offense in the 2nd half and played well on defense while Manu was thrown into QB duties and still played great defense and returned kicks.