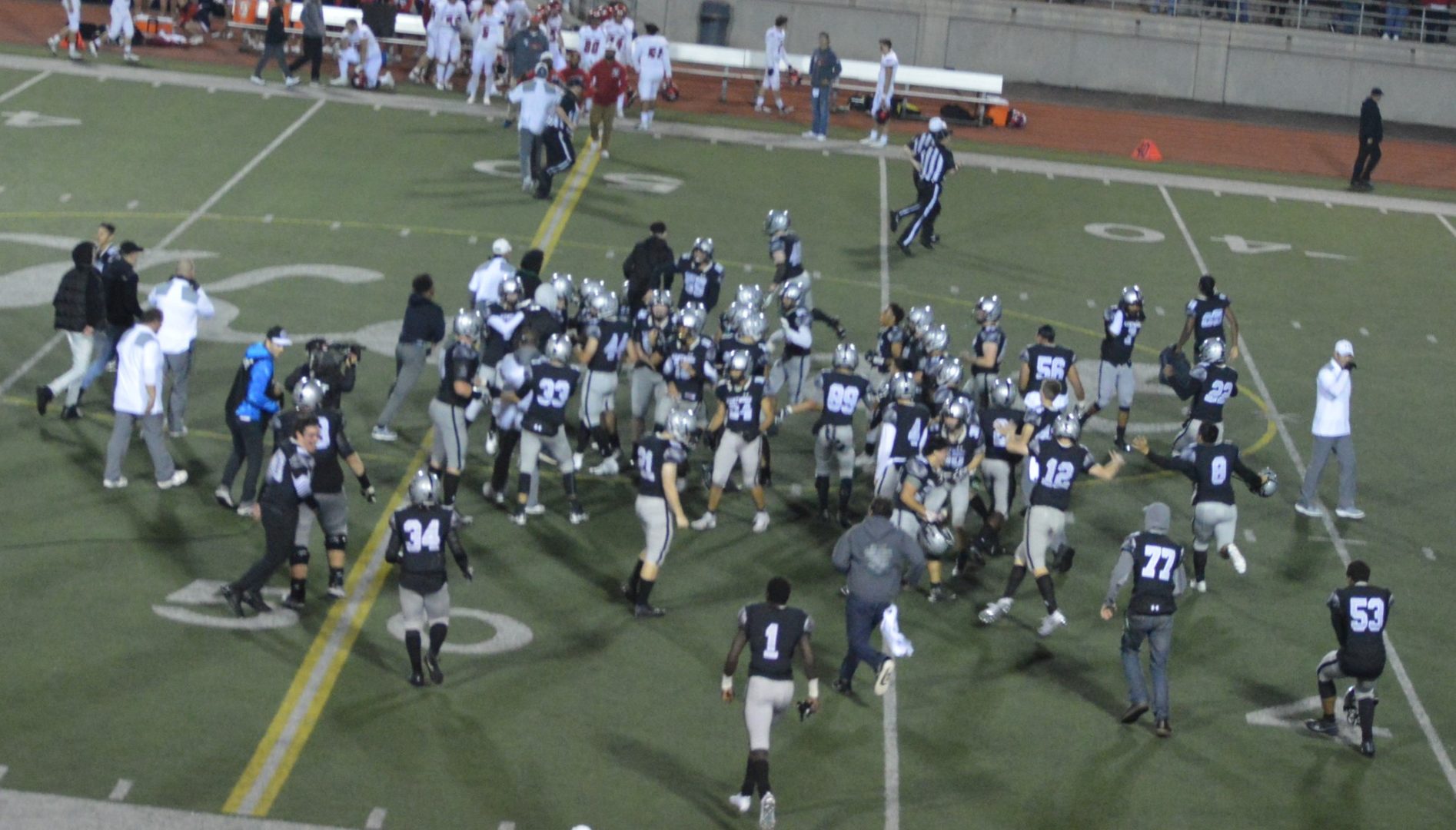 (Kent, WA) Teams that simply look at records and don’t do thorough check on the quality of a team had best beware if the Kentwood Conks are on their schedule. Kentwood came into Thursday night’s game as the definitive underdog to the high powered Kennedy Catholic Lancers. The Lancers are a true air raid team and led by sophomore QB Sam Huard who had passed for more than 3,100 yards through 7 weeks, 2nd in the nation. Head Coach Sheldon Cross does not hide from his offense and in fact hopes that teams will engage in a shoot-out with the Lancers, he truly believes the higher the score the more likely they win.

Kentwood Coach Michael Bush was very aware of who they were playing and game planned like many other underdogs that have played Kennedy. Possession, run the clock, no turnovers and hope the Lancers make some mistakes. But the one thing he knew for sure was not to fall into the trap of getting into a scoring contest with Kennedy. Now can the team pull off the game plan?

The answer was a resounding yes and it started from the beginning. First, Kentwood won the coin toss and elected to receive which is not the norm these days, probably 95% of the time the winner of the coin toss defers to the 2nd half. But Bush knew the best defense against the Lancers is having their offense on the sidelines.

Kentwood took over on their own 21 and drove to the 27 of Kennedy and faced a 4th and 6. They handed the ball off to Gabriel Johnson who surged forward but fell short by a yard and turned it over on downs. Normally we wouldn’t write about a drive that went no where but when you looked at the clock there was only 2:43 left to play in the 1st and the Conks took 9:17 off the clock.

Kennedy wasted little time and quickly lit the scoreboard on 2-min drive capped off by an 11-yard touchdown run by Justin Baker, Michael Snyder added the PAT and it was 7-0. Kentwood answered a little outside game plan when Alphonse Oywak got deep and the Kennedy defender fell down. Church didn’t get off the prettiest of passes but it got to Oywak who then scooted into the endzone, Kevin Oywak then added the PAT and it was tied 7-7.

Kennedy then drove the ball deep into Conks territory but fumbled the ball and KW recovered on the 3. The Conks then drove the ball just across the 50 when Gabriel Johnson busted off a 43-yard TD run to give Kentwood a 13-7 lead after the PAT kick hit the upright. KW added a 44-yard field goal from Kevin Oywak who had just enough leg as the ball deflected off the crossbar and through as time expired in the half.

The Lancers began their comeback with the opening drive of the 3rd quarter on a 52-yard strike from Sam Huard to Jabez Tinae. KW scored next after picking off Huard and then Church hit Alphonse Oywak for an 83-yard TD and went up 22-14. The Conks picked off Huard again and made them pay for it on a TD pass from Church to TE Trevon Erickson and they extended their lead.

Kennedy then responded with touchdowns from Jahvius Leui and then 2-point conversion to Lei-Ben Tivoli-Fesili. The Conks battled right back and Lole Tapasa blasted in with 4:50 to go in the game and pushed the lead back to 2 scores. Kennedy then showed why their offense should always be feared as they scored twice in a little more than 3 minutes.  First Huard hit Junior Alexander in the back of the endzone to pull within 35-29. After holding KW to a 3 and out for the first time in the game they took over with 2:11 to play on their own 34. It took them 1 minute to drive the field with Luei finishing it off, Snyder hit the extra point and the Lancers took a 36-35 lead.

The Lancers only had to hold the Conks to wrap up a nice come-from-behind win on a night they did not play very well. But the Conks with 1 time-out knew they needed to get into Kevin Oywak’s field goal range for a shot at the upset. Gabriel Johnson and Jalin Church moved the ball down the field. They got into field goal position but Kentwood wanted to get a few more yards and move to the middle of the field for Oywak.

On the next play Church kept it but was hit and fumbled it forward where a Conk fell on it so they not only got the ball back they picked up 6 yards and it was right in the middle of the field. Oywak came on and set up for the field goal and when the ball was snapped the holder dropped the ball as an on-coming Lancer broke through to pressure the kick and he got up and scrambled to the right and threw the ball away.

The Kennedy sideline exploded in celebration which drew a flag because there was still 4 seconds on the clock. There was some confusion over the penalty as it was thought to be a dead ball foul and why the ball remained with Kentwood was confusing until it was pointed out that it was 3rd down and since it was an incomplete pass Kentwood had another chance and now much closer on a half the distance to the goal march off for the unsportsman like conduct penalty. The 2nd chance for Kevin Oywak he did not disappoint and drilled the kick between the posts for the game winning goal.

Kentwood ends up tied for 3rd and Kennedy dropped to 4th place. Todd Beamer and Enumclaw tied for the Division Championship but Beamer takes the top seed due to their head to head win over the Hornets. The NPSL will play their 9th week league crossovers on the 26th and 27th which will determine the teams that will advance to the District crossovers. Our ESN Players of the Game were Gabriel Johnson for Kentwood and Kennedy’s Lei-Ben Tivoli-Fesili.

The Wolves snapped a 9-year losing streak to their cross-town rivals Tumwater and will complete their first ever undefeated regular season with a win at Rochester on friday and will head into the District crossovers as the #1 seed. They will host Columbia River on Friday, November 2nd. For a full game story on the Pioneer Bowl Click here for The Olympian’s coverage.

The Lakes Lancers began on a 2-week sour note but Head Coach Dave Miller knew this version of the Lancers was much better than the results of the first 2 weeks. Lakes also got a few players healthy for week 3 and since then they havn’t looked back running roughshod over the PCL. Lakes wqrapped up the #1 seed and no worse than a piece of the PCL Title with their huge win over the Abes. Lincoln needs to bounce back in a hurry when they travel to Bethel with 2nd place on the line. For the game story here is the News Tribune’s Lauren Smith with all the details.

Lakes’ Camyron Gaulke was our MVP of the game for the Lancers and talks to us about the big win over Lincoln.

The Trojans came back from a 17-7 deficit to run past the Hornets and claim their 2nd straight Mountain Division title of the SPSL 2A league. Fife will play at Steilacoom in an SPSL crossover on Friday at 7p. Jake Gregg from the News Tribune has the gamer story here.

The defending State Champs continued their roll to defend their title. The Hawks have wrapped up the #1 crossover seed and will likely get WF West in the crossovers on Nov 2nd. For a game re-cap click here for the Columbian’s coverage.