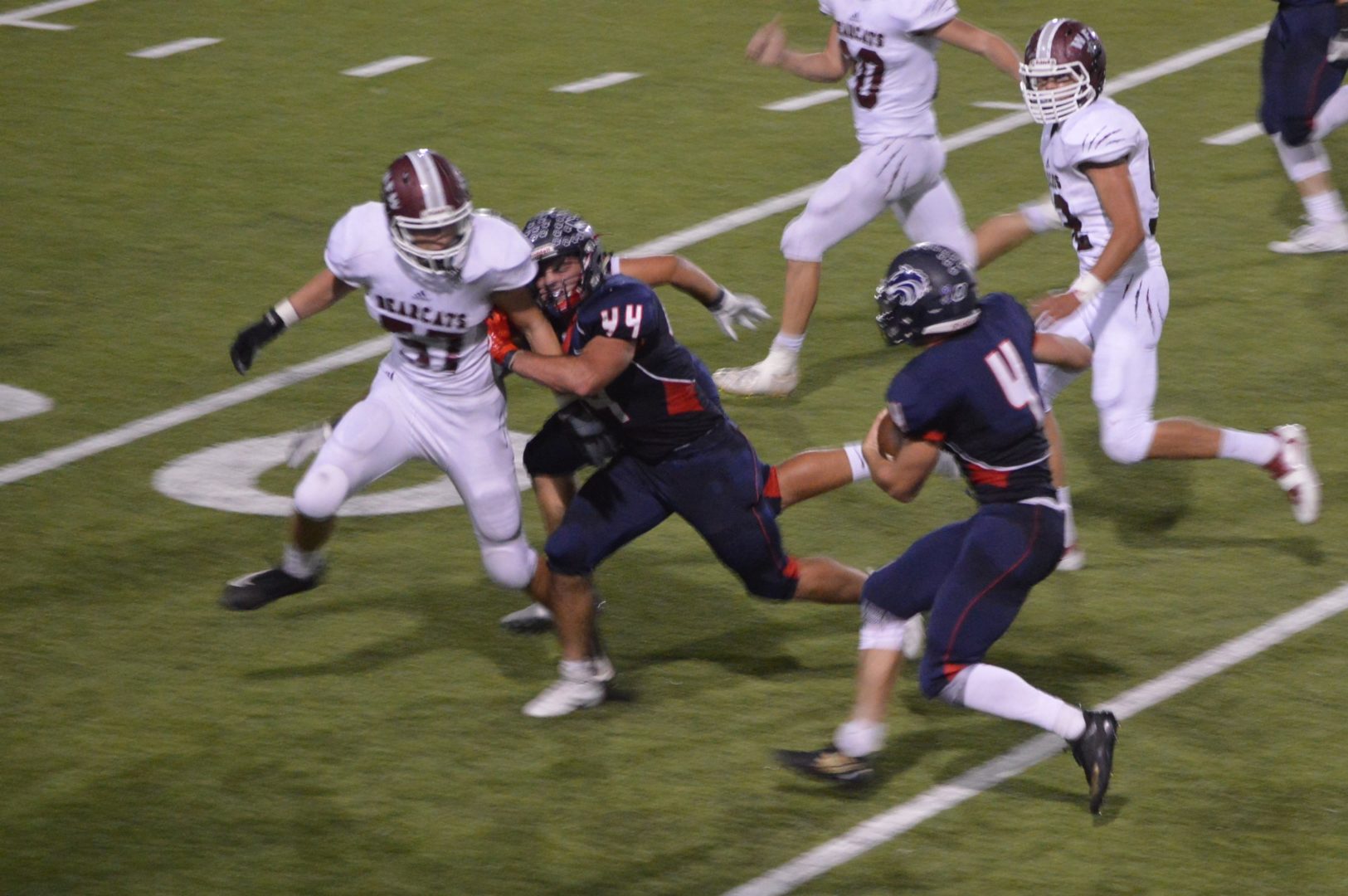 The 4 games on ESN last night are up first with our coverage or links to stories by other great media folks, then as many area games and links as possible.

(Tumwater, WA) There was no bigger game in the EVCO 2A league opener than this one at Tumwater District Stadium. With 3 teams clearly at the top including WF West and Black Hills along with favorite Tumwater, this game could determine 2nd or even 1st place. The game featured a couple of scoring outbursts and great defense on both sides. After punting to Black Hills after the opening possession the Wolves took exactly 1 play to find the endzone when speedy Taylor Simmons hit the right edge after a great opening block sequence and was gone 80 yards. The PAT failed so Black Hills led 6-0.

It took about 15-seconds for WF West to answer when QB Josiah Johnson connected with Carver Brennan in stride and dashed in for a 77-yard scoring strike. Bryce Laufenberg booted the extra point for a Bearcats 7-6 lead. The score stayed the same until early in the 2nd quarter when Black Hills took over in great field position at the Bearcat 48. They drove it down to the 1 and had a 1st and goal. On the running play Leandre Gaines broke through and stuffed the run play for a 4-yard loss. Black Hills ended up settling for a 23-yard Jake Bender field goal and the Wolves re-captured the lead 9-7. The Wolves would get one more score in the 1st half when Ethan Loveless picked off a pass and returned it 52 yards to the WF West 21. Taylor Simmons ran in his 2nd TD from a yard out as he went underneath the defensive surge. Trying to push the lead to a 17-7 score again Simmons was called upon and this time took flight but the Cats Rob SanSouci grabbed in in mid-air and slammed him backward denying the 2-point try and they went to the half with Black Hills leading 15-7.

As the 2nd half began the Wolves began with the ball and were looking to go up by 2 scores. Simmons got a hold of the kick-off return and looked to be gone but got caught at teh 9 after an 80-return. The Bearcat defense did give up a 26-yard Bender field goal but they held and denied the Wolves 6 but they did go up 18-7.

It was now the Cats turn to answer and they did just that with a 52-yard pass and catch from Johnson to Gaines who finished off the run in with a strong stiff arm to keep the defender at bay while he rumbled into the endzone. They went for 2 to try and cut the lead to 3 and Johnson found Troy Yarter just in front of the back line for the 2-point conversion and now the lead was down to 3 and the momentum was on the Chehalis side of the ball. Black Hills then had their worst possession of the game with multiple penalties and faced a 4th and 27 from their own 6. On the snap back to Nic Bovenkamp the punter it was low and Bovenkamp kneeled down to scoop up the ball but when he did his knee touched the ground and it was a safety giving the Bearcats 2 more points and now the 18-7 lead was down to 18-17.

Once again the 2 teams settled into a back and forth with no one breaking through until early in the 4th quarter. The drive got set up by a Julien Kennedy fumble recovery on the Bearcat 45. A couple of plays later Ethan Loveless hit Josh Rodgers on the numbers for a 26-yard touchdown pass, the PAT was good and Black Hills led 25-17.

The Bearcats came flying back not once but twice and it was two great defensive plays that secured the win for the Wolves. On a 4th and 1 on the Black Hills 31 Zach Loveless the middle linebacker stuffed the run attempt and the Cats turned the ball over on downs. After not being able to get a 2nd 1st down on the ensuing drive which then they would have been able to run out the clock they kicked the ball to the Bearcat 9. Johnson and company then moved the ball down the field including a big 36-yard strike to Yarter. With ball down near the Wolves 30 Johnson dropped back to pass when Devin Treptow got tohim and stripped the ball and teammate Jordan Claridge fell on the loose ball for Black Hills and the Wolves went into victory formation to kill the clock and notch their 5th win of the season and are now 5-0 and 1-0 in league play. WF West drops to 2-3 and 0-1.

Our ESN Players of the Game went to the Wolves Julien Kennedy and the Bearcats Josiah Johnson.

(Adna, WA) The Pirates used a huge 2nd half to put away the Tigers and send a message that they don’t plan on giving up the #1 ranking in the state any time soon. Aaron VanTuyl from the Chronicle was at the game and you can read his story here.

(Vancouver, WA) The Papermakers made quick work of Heritage in the undercard of a big McKenzie twin bill. The Columbian Adrianos Bekris was at the and you can read his story here.

(Vancouver, WA) The nightcap was a doozy at McKenzie and Union roared back for a huge non-league win. Read Andy Buhler’s story in the Columbian here.