(Montesano, WA) The Columbia-White Salmon Bruins took their 4 hour bus trip and arrived in Montesano about 2 hours before kick-off. Head Coach Dan Smith was hopeful there wouldn’t be any impact on his team preparedness when the ball was kicked off at 7 o’clock. It took Montesano’s Teegan Zillyett 15-seconds to answer that question as he took the opening kick-off from the 10 up the far sideline and cut back at the 30 to the middle of the field and into the endzone for the touchdown. Jordan King added the extra point and it was 7-0 in the blink of an eye.

The Bulldogs then kicked and forced a 3 and out and got the ball back on the Bruin 48. They quickly moved the ball down the field and then Shaydon Farmer hit Sam Winter with a slant pass and Winter turned it up the middle of the field and as he was being tackled inside the 5 he dove for the goal line and got there for the 2nd touchdown in less than 4 minutes. King connected and it was 14-0.

It looked like this was going to be yet another run-away win for the Bulldogs who had scored 95 points in their first two games. But the 2nd touchdown seemed to awaken the bear and the Bruin defense stiffened. The two teams exchanged possession until early in the 2nd quarter when Montesano took over on the 50 and looked like they were headed for another touchdown when the drive stalled at the 11 and Bulldogs Coach Terry Jensen sent in King for a 28-yard field goal that he drilled right down the middle. That would be all the scoring in the first half and Montesano went in to the break with a 17-0 lead.

The Bruins then got right back into the game with the 1st drive of the 3rd quarter. CWS took over on their own 25 using a solid run game alternating with Trenton Howard and Cesar Isordia and a few scrambles from QB Austin Charters moved the ball out to mid-field. The big play was a play action pass and Charters who had faced a heavy dose of Bulldog blitzing got some time and almost over threw his receiver Chandlor Bucklin but Bucklin laid out and made a fabulous catch at the 7. One play later Howard took the hand-off to the left cut back up the middle and into the endzone. The PAT failed but the Bruins were on the board trailing 17-6.

Montesano would answer a couple of drives later when Zillyett scored his 2nd TD of the game on an 8-yard scamper capping an 86-yard drive with a run heavy selection. The Bulldogs took an 24-6 lead but there was still plenty of time in the game with 11:12 on the clock.

CWS would answer immediately and in a big way when Charters dropped back to pass on 2nd down and delivered a perfect pass to Alarick Blankenship who caught the ball at about the 50 yard line in stride and pulled away for a 72-yard pass, catch and run. The 2-point conversion failed but the Bruins still had a shot with 10:21 to play and trailing by 12.

The Bulldogs were held on their next possession but took 3:00 off the clock but the play of the game just might have been the punt from Montesano’s Tanner Nicklas. The Bulldogs took a delay of game and Nicklas used it to perfection dropping a sky high punt over the head of Bucklin inside the 5 and checked up like a great golf approach shot at the 2 yard line. With 7:07 left to play the Bruins drove the ball out of the shadow of their own goal line but the drive stalled and Coach Smith decided to punt the ball away despite being down by 2 scores. The Bulldogs took over and picked up a key first down and the Bruins only had 1 time out left so they were able to run out the clock and preserve the win.

There was little celebration though by the Bulldogs they knew they had been in a battle and Coach Smith for CWS came off the field saying it felt like a win to come to the always powerful Montesano and hang with one of the best programs in the state. Both coaches know there is plenty to improve on but a game that started out looking like a blow-out turned into a great battle of the trenches in a true grind it out game. Both teams were 2-0 and both had easy times in their 1st two weeks and both needed a game like this as they approach league play. Montesano will take the hard earned win and improve to 3-0 and although their record doesn’t show it the Bruins are 2-1 but maybe feel like they are more 3-0 than the Bulldogs do.

Our ESN Players of the Game went to Tanner Nicklas for the Bulldogs for his work on both the offensive and defensive lines and great punting while Trenton Howard earned our award for the Bruins as he finished with 138 yards rushing and a TD.

Our interview with Tanner Nicklas on the tough win 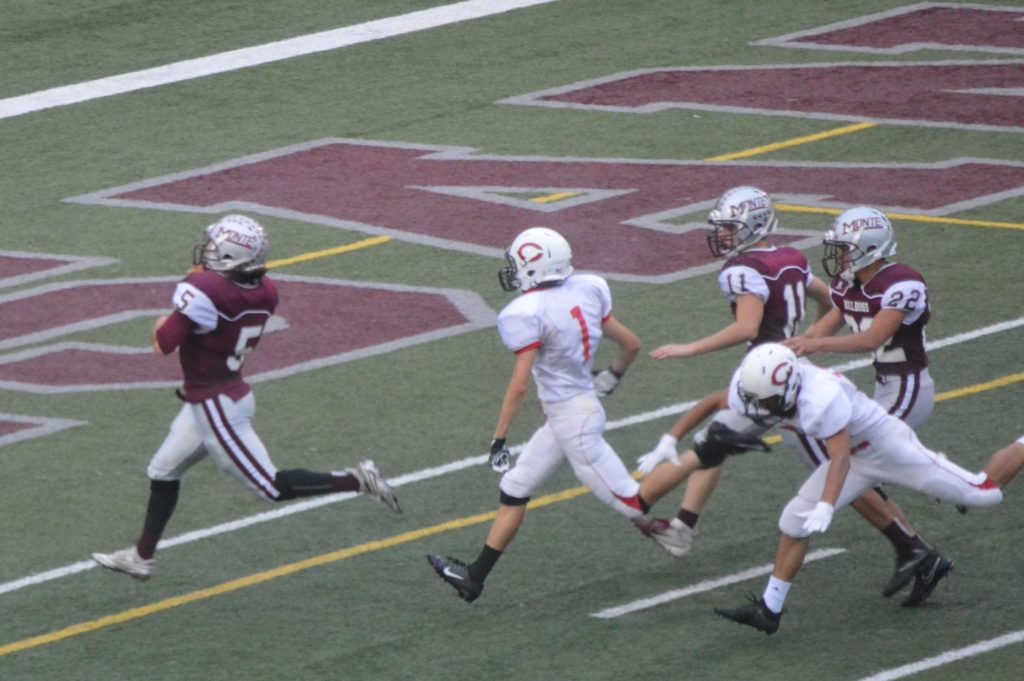