This is week 2 of the 2018 High school Football season below are scores, stories or links to stories of ESN affiliated schools and their leagues.

(La Center, WA) The Beavers blew open a close game in the 2nd half scoring 3 unanswered touchdowns to push the score from 20-14 to 40-14. Tyler Flanagan threw for 300 yards and 4 touchdowns and ran for nearly 110 and scored one on the ground.

La Center kept pace in the 1st half and actually took a 7-6 lead in the 2nd quarter when Wyatt Dodson blasted in from the 3. Flanagan then hit Christian Yager for a 68 yard bomb followed by a 12-yard strike to Wyatt Wooden. The Wildcats would keep it close when Tom Lambert hit Andrew Scott for a 30-TD and it was 20-14 at the break.

Flanagan then took over running in a score and hitting Kenyon Guy for a 72 yard TD to pull away for the win. The Beavers are now 2-0 while La Center drops to 0-2. Our ESN Players of the Game went to Tyler Flanagan for the Beavers and Andrew Scott for the Wildcats.

(Tenino, WA) The Beavers continue to struggle in 2018 with a young squad and fell behind early only scoring a pair of late touchdowns in the 4th quarter to avoid the upset. The Beavers drop to 0-2 and will take on Castle Rock next week. For more on the King’s Way  side of the game find it here Game Story in the Columbian .

(Adna, WA) First let’s say this we apologize for not getting this game on the air last night but we simply could not get enough upload speed to get the video to stream. We are working with Adna officials to see if we can find a fix, Adna is in a tough wifi spot that many people know very well. We think there are a couple of options and we hope to have a broadcast at Adna as early as this week when they host defending State Champions Kalama.

Our crew did record the whole game and we are hoping to upload it to our NFHS site but they also reported the game for us which turned into a 1-sided affair. Cole Fay began this game like he did last week with a long touchdown run this time 55 yards and little did the Pirates know this is all they would need.

Adna would dominate the game with a flat out shut down defense and have yet to give up a point in 8 quarters. Head Coach KC Johnson said he was excited with the defensive effort once again and they will need all of it and more next week against the Chinooks. Johnson said even the offense has put up more than enough points in both games so far he says there are still things that need to get better in a hurry. He was happy with the penalty situation as they were flagged for just 3 infractions for 20 yards a huge improvement from week 1.

The Pirates would roll up almost 300 yards and part of why it wasn’t more was due to the short fields the defense provided all night as they limited the Mules to less than 90 total yards. Adna ran the ball for 230 led by Elmer Loose with 115 yards while Cole Fay finished with 63 and Chance Fay with 33. QB Braden Thomas ran for 10 and was 6/12 for 52 yards passing.

Our Eli Sports Players of the Game went to Adna’s Braden Thomas and Wahkiakum’s Lucas Brown.

Football: Stadium and K-M light up the stat sheet; Tigers prevail in a shoot-out

Mon Sep 10 , 2018
9/8/18 Stadium 48, Kent Meridian 27 (Kent, WA) 1,065. That was the total offense the Stadium Tigers and Kent Meridian Royals put up Saturday night at French field. This total would have been a lot more had the officials not littered the field with penalty flags all night. Leading the […] 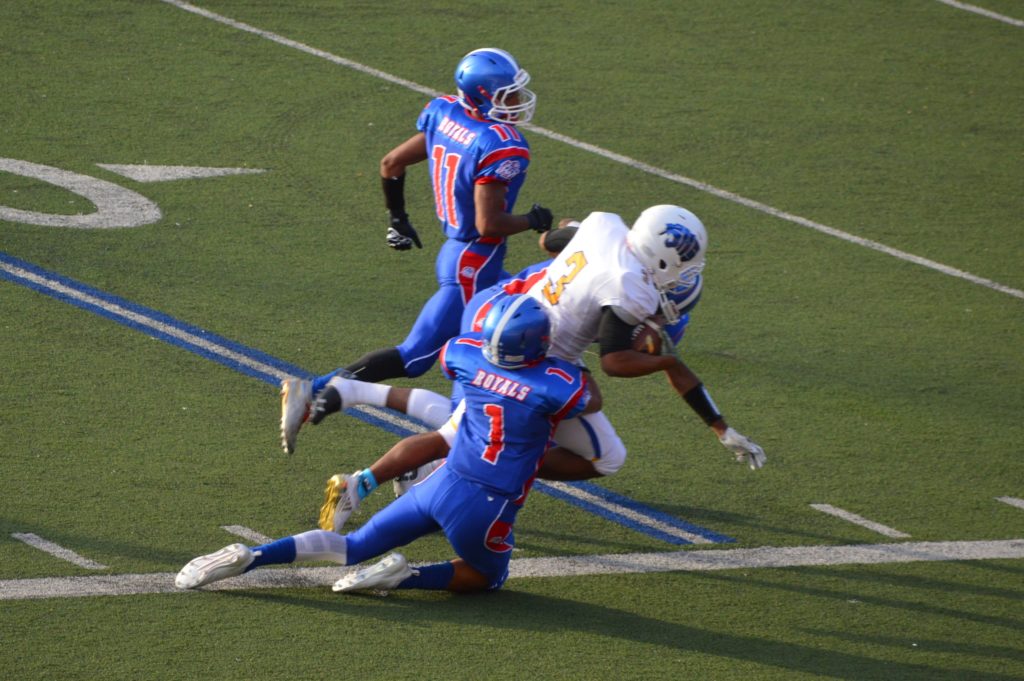