(Lacey, WA) The River Ridge Hawks were still smarting from giving up a late lead in their opening week loss at WF West 28-27 and were determined to bounce back in a hurry. It took 1:17 for the Hawks to score the 1st touchdown of the game and they kicked off. The Mount Tahoma T-Birds on their 2nd play of the game fumbled the ball and was recovered by the Hawks Brian Melloy on the T-Bird 31. Ridge QB handed the ball off twice both times to Kieran Hunkin who ran for 17 and then 14 yards right up the middle for a quick score. Jacob Miller added the PAT and just like that it was 7-0.

The two teams then traded several possessions when the Hawks struck again early in the 2nd quarter and it was a familiar playbook as Hunkin took 3 straight hand-offs and with runs of 21, 20 and 12 found himself back in the end-zone and the Hawks built a 13-0 lead. 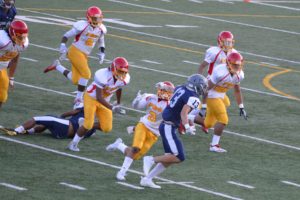 The T-Birds twice had a chance to get back in the game when they drove down to the 12 yard line before getting pushed back and then down to the 7 where a highly questionable holding call put them in a 3rd and 13 instead of 3rd and 3 from the 7. The Hawks then came up with 2 big sacks to end the threat.

River Ridge had one last shot with the ball before halftime and sophomore Jevon Brown made the T-Birds pay when he hit Dontae Owens on a 23-yard TD pass and the Hawks went to the break with a 20-0 lead. This touchdown also seemed to gut punch the T-Birds going from a chance to get back in the game to trailing by 3 scores in less than a couple of minutes.

If there was any doubt of the outcome Hunkin struck again on the opening drive of the 2nd half scoring in just 1:39 capping it off with a brilliant 42-yard run to go up 27-0. Hunkin finished with 168 yards 3 TD’s along with a fumble recovery and 2 INT’s on defense.  Melloy then got into the act with 4:07 to play in the 3rd bulling in from the 4 to go up 34-0.

The brightest spark of the night for the T-Birds was running back Trevino Lewis who ran 27 times for 182 yards and scored his first touchdown with 5:50 to play in the game on a nifty 17-yard dash, Justin Han added the extra point and Mount Tahoma was on the board trailing 34-7.

The Hawks began inserting back up players to get some experience and on the next possession Cedric Crisostomo sprinted 41 yards to score the final touchdown of the night for the Hawks just 22-seconds later and Ridge took a 41-7 lead. Lewis scored again on a 10-yard run just a minute later at 4:28 to make it 41-13 and the Hawks ran out the clock to claim the win.

River Ridge is now 1-1 and will face Steilacoom next week in SPSL 2A league play while Mount Tahoma dropped to 0-2 and gets Lakes in their PCL opener next Friday. Our Eli Sports Players of the game went to Kieran Hunkin for River Ridge and Trevino Lewis for Mount Tahoma.

Big Night in Football on ESN, ABC Jam and the NFHS

Fri Sep 7 , 2018
9/7/18 Week 2 of the High School Football season will also be the first time the Eli sports Network will have 4 crews out doing games bringing you 4 games live on ESN television. We’re able to do this through a partnership with the NFHS and it is a subscription […]