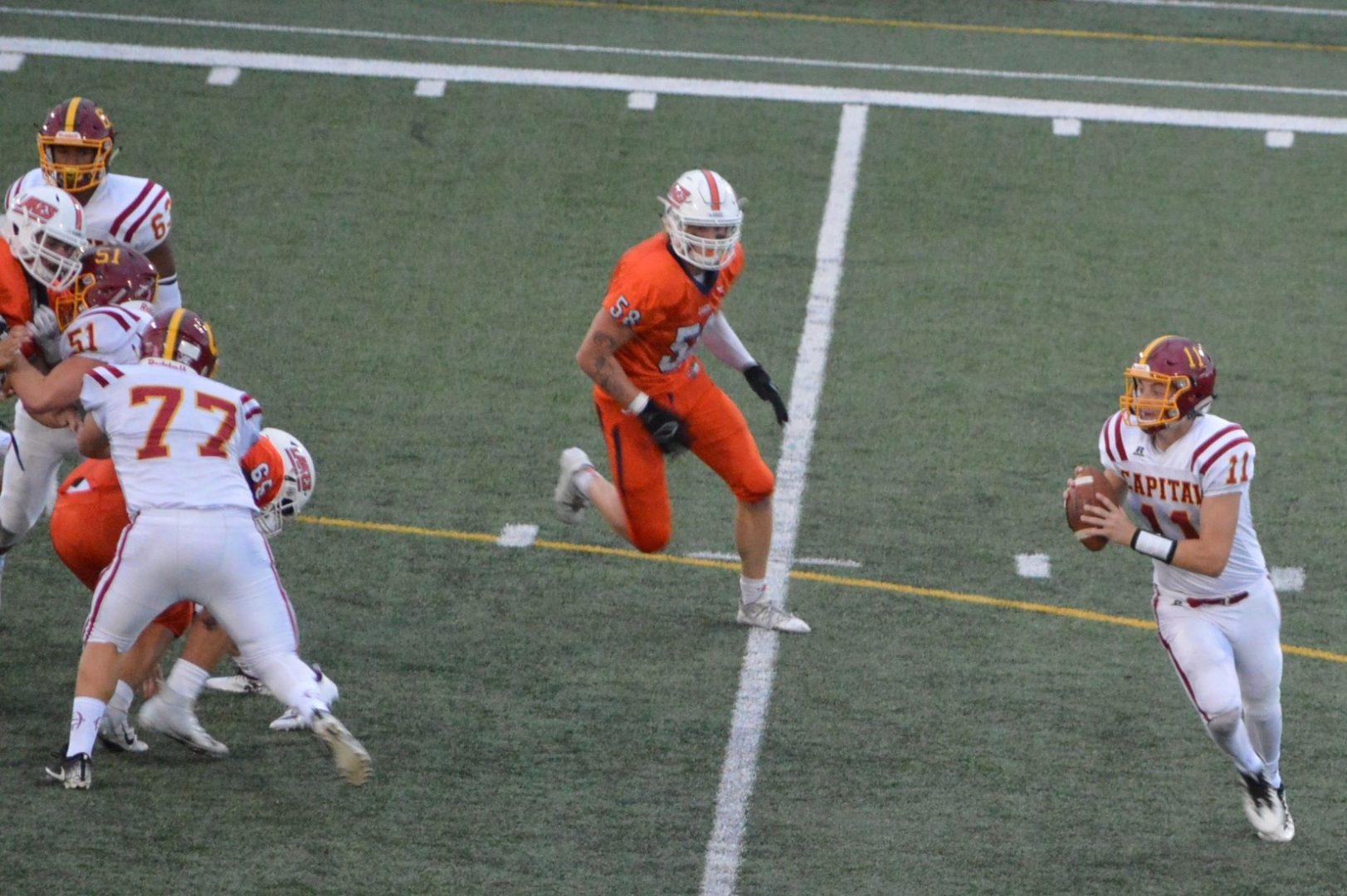 (Lakewood, WA) The Capital Cougars Senior class have had an odd trip through their high school careers in sports dealing with lots of off the field drama, none of it brought on by themselves but simply have had to endure several changes and now in 2018 began the year with their 3rd Head coach and 2nd Athletic Director in 3 years. It was clear the upheaval last had an impact as they staggered home with a 3-6 overall record. New Head Coach Terry Rose was a chance at a fresh start and it looks like the Senior’s are ready to take their shot as they toppled a perennial favorite to be in the post season the Lakes Lancers.

Led by Seniors QB Grant Erickson and receiver Chris Penner the Cougs came out firing on offense with an impressive 85 yard drive set up by a fumble recovery. The Lancers QB Liam Bladow was trying to turn a low snap into a few positive yards after guiding the Lancers deep into Cougar territory when the ball got punched out of his hands and Capital recovered the ball. Erickson then was pinpoint in his passing firing shots of 30, 8 and then 30 setting up a beautiful pass over the top to Penner who had beaten his man deep. Erickson lobbed up a perfect throw and Penner did the rest grabbing the ball and taking it into the endzone for the 1st touchdown of the season, Penner added the PAT and it was 7-0 with 7:41 to go in the 1st quarter.

Early in the 2nd quarter Lakes drove the ball on a 9 play drive to the Capital 1-yard line and looked like they were going to punch in the potential tying score. But the Cougar defense stiffened and twice denied the Lakes from pounding the ball across the goal line. Capital took over and the Lancers forced the Cougars into a 3rd and 9 when Erickson broke free on a 42 yard run out of the endzone for a huge gain but a holding call in the endzone against one of the Cougars resulted in a safety and Capital had to kick off to the Lancers from their own 20. But neither team could get anything going for the rest of the half. In fact the defense of the Lancers shined especially corner Daeshawn Wayne who made a pair of spectacular defensive plays deep.

The Lancers got things going with their 1st possession of the 2nd half when they took the ball over on their own 20 and drove 80 for the go-ahead touchdown. Devon Nofoa-Masoe, a freshman, announced his presence in a big way ripping off a 29 yard run and then taking it in from the 10 yard line. Bladow kicked the PAT and Lakes had their 1st touchdown and 1st lead of 2018. But that would be it for the Lancers.

Capital’s Head Coach Terry Rose no doubt was interested in how his team would respond and they did so brilliantly with a 75-yard drive keyed by Eric Jackson’s spectacular 33-yard run from the Lakes 34. Jackson stepped up into the hole and looked like he was going to get stuffed for a short gain when he sidestepped to his right and found a hole up the far sideline and almost knocked it in. That play was the last play of the 3rd quarter and Jackson cruised into the endzone from the 1 on the 1st play of the 4th quarter. Erickson then surged forward for the 2-point conversion.

Lakes could never get back on track as it looked like everything was just off for them last night with dropped balls, over throws and simply being on the same page with a couple time players colliding with each other during a play. Capital would clinch the game with 4:15 to play when Grant Erickson used his 6’6 body to go up and over the top of the line of scrimmage to reach across and break the plain of the endzone from the 1 yard line. It capped a 77 yard drive, Penner kicked the extra point for the 22-9 lead which would end up being the final score.

Our ESN Players of the Game for Lakes we went with Camyron Gaulke who led the Lancers rushing with 62 yards had 2 catches and played all night on defense. For the Cougars we simply could not decide so we went with new Coach Terry Rose to more signify the true team effort that the Cougs put on the field. There were several players who could we made an argument for including Penner and Erickson but we had a hard time looking past Eric Jackson, Clayton Grady, Grady Lindekugel, Mason Bertelli and Daniel Bailey to name a few more. So we thought it fitting to give it to the Head Coach for the 1st time for the true team effort this win was for maybe an emerging power in the South Sound Conference. Lakes now 0-1 has another non-league game at Central Kitsap next week and Capital at 1-0 will host WF West in a non-league match-up.