(Auburn, WA) 94-year-old Arturo Arboleda watched his horse Regazze Cat take the “Not in the Rocking Chair” Purse on Sunday at Emerald Downs. The race was a one of a kind as it was limited to horses trained by those who were born prior to June 6, 1928. Arboleda at 94 was the oldest over 91-year-old HR Pat Mullins, 90-year-old Ira Rhodes and the youngest who just turned 90 on June 6 Bob Meeking. Rhodes’ horse Some Storm Cat was a late scratch reducing the field to 4.

The Emerald Downs’ Media crew provided the following full story and a re-cap of the $50,000 Coca-Cola Handicap.

The first ever “Not in any Rocking Chair Starter Allowance” was taken in gate-to-wire fashion by Regazze Cat in 1:09.45 for six furlongs.

It was undoubtedly the most unique race in Emerald Downs’ 22-year history. The field was limited to 3-year-olds and up which have started for a claiming price of $3,500 or less in 2017-18 and whose trainer was born on or prior to June 6, 1928.

With Kevin Orozco riding, Regazze Cat (left) sprinted clear from the No. 1 post and held off a dogged challenge by 11-year-old Trelawny through the stretch for the victory. Regazze Cat has won two straight for owner/trainer Arboleda, who watched the race from the winner’s circle with his fellow nonagenarians.

“This was a lot of fun, I hope we can do it again,” Arboleda said. “I’m the oldest in the bunch, so it’s fun to beat the young guys.”

SIPPIN FIRE EXPLODES TO THE FORE IN COCA-COLA

A Washington-bred gelding by Harbor the Gold-Bahati, Sippin Fire is 3-1-0 in six career starts with earnings of $76,013, including $26,950 for Sunday’s victory. He now has two stakes wins—2017 Washington Cup Juvenile and 2018 Coca-Cola Stakes.

The victory made amends for a fifth place finish in last month’s Auburn Stakes, the gelding’s first start of 2018.

Breaking alertly from the outside No. 7 post, Sippin Fire stalked Freiburg around the turn, gained command three-wide into the lane and powered through the stretch to victory.

“Steve (Bullock), Lance (Bullock) and Abbie (Johnson) do an awesome job with this horse,” Bowen said in a jubilant winner’s circle. “I don’t want to take credit for the win today.”

Freiburg, improving rapidly for trainer Jose Navarro, was clearly second best and paid $9.40 and $5 for place and show. Ridden by Eswan Flores at 119 lbs, Freiburg set fractions of :22.75 and :45.35, and finished well after relinquishing command to Sippin Fire.

NOTES: Bowen is No. 6 all-time with 27 stakes wins at Emerald Downs, while Bullock is tied for No. 9 with 22 stakes wins at EmD. . .Blaine Wright saddled three more winners, including a one-two finish with Baja Sur ($10.20) and Helaman in the $18,500 maiden special for 2-year-olds. A Washington-bred by Smiling Tiger-Premo Copy, Baja Sur won by 5 ¼ lengths while covering five furlongs in :57.36. . .Bowen and Julien Couton rode two winners apiece on the 10-race card. . .2018 Portland Meadows Mile winner Grinder Sparkasglo ($16.20) rallied to edge Oh Marvelous Me in the $18,500 supporting feature for 3-year-olds and up. Ridden by Couton, for trainer Robbie Baze and owner Richard Sena, the 7-year-old Grindstone gelding ran 6 ½ furlongs in 1:15.15. . .Razor-sharp 5-year-old Iron Rob ($9.80) rallied from far back to win the $11,200 John Parker Racing Purse in 1:14.99 for 6 ½ furlongs. A star-studded field of older claimers included 2017 claimer of the meet Wine At Nine and 17-time Emerald Downs’ winner Mike Man’s Gold. . .2017 Longacres Mile winner Gold Rush Dancer finished off the board in Sunday’s $80,000 Siren Lure Stakes won by Bombard on the downhill turf course at Santa Anita. . .Racing resumes Friday with first post 6:30 p.m.

Thu Jun 21 , 2018
6/20/18 (Kent, WA) The 4A North Puget Sound League is trying a new format for their league play this fall in an effort to create a more equal competitive balance. The idea was started by Kent District Athletic Director David Lutes who wasn’t shy in saying he looked at the  […] 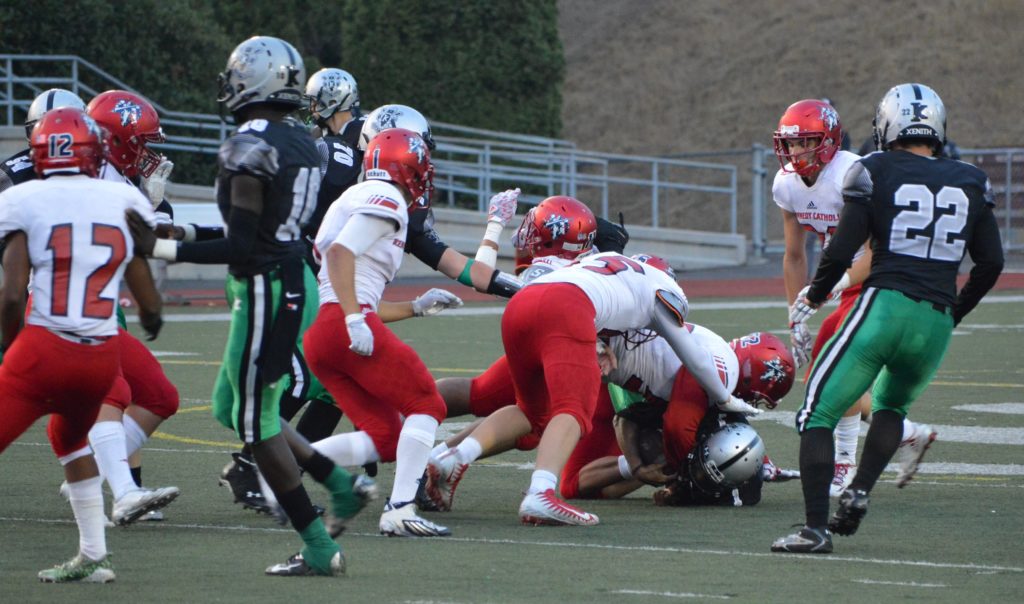