(Tumwater, WA) Coming into the matches Tuesday night the Evco 2A was a jumbled mess and when it was over it was fairly unjumbled. Black Hills and Tumwater were tied at 6-1 with the tie-breaker going to Tumwater with their head-to-head win over the Wolves. Aberdeen was just a game back at 5-2 with both losses to Tumwater and Black Hills and they were looking to climb back into the title chase.

You could tell both teams knew this match had a ton of importance as they both came out with a play-off feel of intensity and the match was plenty physical. The match was played with only 2 officials which meant one sideline was without an AR. We’re not saying some players may have used that to their advantage at times but lets say if they did both sides did so and both sides did so effectively. As physical and intense as the game was there were only 2 yellow cards, 1 for each side and late in the match. We have tons of credit going to the head official who was all over the field and made sure the match did not get out of hand and the result was a great high school soccer match with lots of action and a finish that went down to the wire.

It was scoreless through the 1st 30 minutes although Black Hills certainly had more chances especially with multiple corner kicks in fact in the end they had 12 to Aberdeen’s 4 but it was Aberdeen who ended up with the best chance to score but a fabulous save by Hayden Lloyd kept the ball out of the net. This was late in the match and would have tied it at 2-2. But let’s tell you how it got to be 2-1 and the 1st goal came in the 31st when Benmet Lester fired a low shot across the goal from Bobcat keeper Luis Soto and into the net. The shot was set up with a brilliant pass from Bekele Dowty who got the assist. This would be all the scoring in the 1st half and at the break it was 1-0.

Aberdeen came out firing to begin the 2nd half and it paid off just 2 minutes in with the equalizer tying the match at 1-1. Luis Martinez set up the tying goal with a great pass to Tony Oropeza and Oropeza delivered blasting a shot past Wolves keeper Trevor Fourtner. Fourtner had no chance of stopping this well placed shot and the game was even at 1-1.

Black Hills responded just 5 minutes later as their offensive attack never waned in this 80 minute battle. This time Michael Anderson set up the play taking the ball into Bobcat territory and pushing the pass to Evan Ellison who did not disappoint hitting another low shot that was just out of the reach of Luis Soto and the Wolves were up 2-1. It was hard to believe that was going to be the final score but both keepers and back line came through time and again with magnificent saves including the Lloyd clearing shot when Fourtner attacked a shot and it bounced off him near a bobcat who fired at the empty goal but Lloyd came from no where and clear the sure tying goal. Even later in the match Bekele Dowty had a beautiful on goal shot but Soto came up big with a punch out to keep Aberdeen within 1 but the Bobcats ran out of time dropping this heart-breaker to Black Hills.

The Wolves got some big help from Centralia who stunned Tumwater 3-2. The Tigers led 3-0 and held off a late charge from the T-Birds but the loss means Black Hills has sole possession of 1st place with a 7-1 record while Tumwater is now 2nd at 6-2, Aberdeen 3rd at 5-3 and Centralia has a solid hold on 4th at 4-4 with their eyes on a late season run. Our Pacific Sports Spa Players of the Game went to the Wolves’ Benmet Lester and the Bobcats Tony Oropeza and our Thorbeckes Sportsmanship Award of the Game went to Black Hills’ Michael Anderson.

Evco 1A Fastpitch: Montesano sweeps Forks in a big twin bill on Wednesday 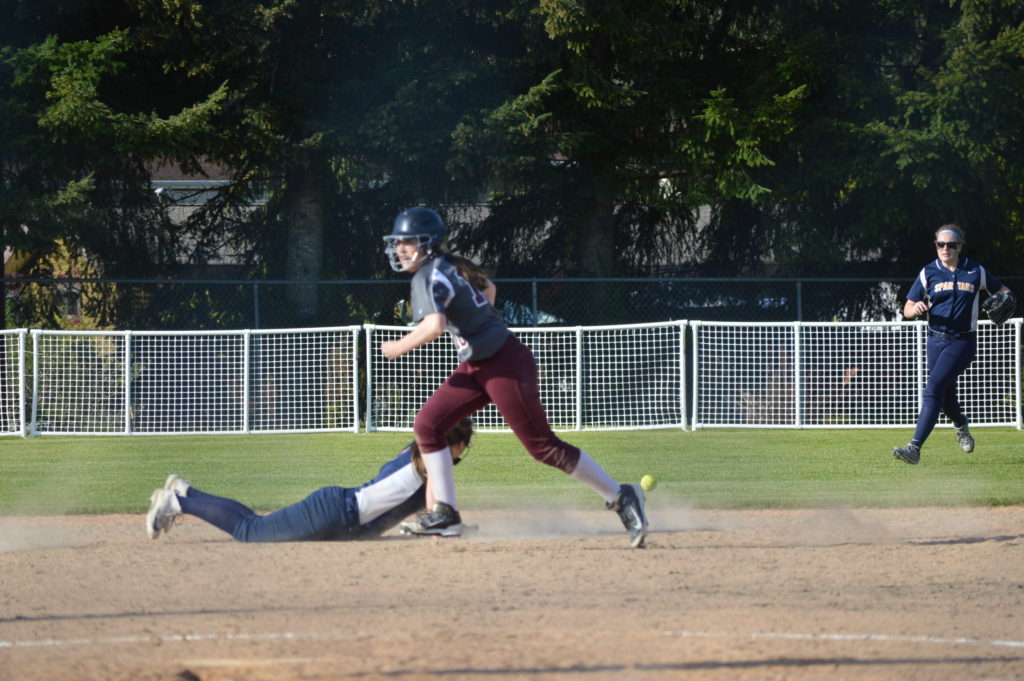