(Tumwater, WA) Last week the Tumwater Thunderbirds jumped out to a 3-0 lead against the Tigers but Centralia came from behind for a 5-4 win. On Tuesday it was the Tigers with an early lead with the T-Birds coming back to win this one and tying up the season series 1-1 which will be decided today in Centralia. Both teams were also looking to snap losing streaks as Tumwater had reeled off 4 straight losses and Centralia 2 in a row.

The Tigers took a 1-0 lead in the top of the 1st but left the bases loaded which proved to be far more costly than believed at the time. Tumwater pitcher Landen Jordan gave up just 1 hit in the 1st but it was an RBI base hit. Jeremy Wood led off with a ground ball and Jordan’s natural reaction was to try and knock it down which he did and then picked up the ball but an errant throw left Wood on safely. Had the ball got past Jordan 2nd baseman Elias Polito looked like would have a fairly routine play. Jordan got the next 2 batters to fly out in foul territory but then he hit the next batter Colby Steele. Broc Selstrom then singled driving Wood in for a 1-0 lead. Jordan then walked the bases full and the Tigers had a chance to get to the T-Birds but Jordan coaxed a fly ball to Dylan Grotte in left field off the bat of Dom Aguire to escape the inning giving up just the 1 run.

Centralia then took a 2-0 lead on a controversial play in the top of the 4th. Jackson Hull got on via a walk and then moved to 3rd and two pitches that got by the catcher and went to the deep backstop at T-Bird field and catcher Reid Little had no chance in getting Hull. With no outs Jordan almost got out of the inning giving up no run runs when he took a comebacker and checked Hull and threw out Aguire 1-3. He then hit Nolan Miller who was awarded 1st base. Miller tried to steal 2nd and was thrown out with Hull staying put at 3rd and now with 2 outs Tumwater could get out down just 1. Jeremy Wood then gounded one to 3rd baseman Shea Bowen sho scooped it and fired a shot to 1st getting Wood in time but the ball fell ouot of 1st baseman Michael Wagar’s glove. The field ump ruled he was out but after Tiger’s coaches objected and asked him to get help from the home ump the ruling was overturned and Hull who came in to score wasa safe making it 2-0.

Tumwater started the comeback in the bottom of the 5th when Bowen walked to lead off the inning against starter Broc Selstrom. Both Selstrom and Jordan went the distance for their teams in this contest. Michael Wagar then came up seeking redemption and got ripping a double to the right-center gap for a stand-up double scoring Bowen and it was back to a 1-run game. The T-Birds tied it in the 6th when Dylan Grotte struck out but the ball got by the catcher and the speedy Grotte was easily safe at 1st. Hunter Klingelhoffer then ripped a single and was followed by an RBI single from Elias Polito and after 6 it was all even at 2-2.

Tumwater then needed to only score a run for the win in the bottom of the 7th Kaden Lewis drew a walk to lead off the inning. Jakob Holbrook then laid down a sac bunt but the throw to 1st was low and now the t-Birds had runners on 1st and 2nd. Reid Little went to sac bunt but the fielding attempt simply missed and he was on with a base hit and the bases were loaded with no outs. Lead-off hitter Wyatt Palmer came to the plate and got hit by a pitch to get the winning RBI. It wasn’t quite the walk-off hit Palmer likely was envisioning but no doubt the T-birds aren’t worried about semantics and snapped their 4 game losing steak.

With the win the T-Birds move into a 3rd place tie with Black Hills at 5-5 after Aberdeen stunned the Wolves with their 1st win of the year 9-8. WF West continues to roll blasting Rochester 22-0 and are 10-0 in Evco league play. Our Pacific Sports Spa Players of the Game for Tumwater went to Shea Bowen and to Centralia’s Kolby Sharp and our Thorbeckes Sportsmanship Award went to Tumwater’s Landen Jordan.

Evco 2A Soccer: Big win for Wolves over Bobcats propels them into 1st place

Thu Apr 26 , 2018
4/24/18 Black Hills 2, Aberdeen 1 (Tumwater, WA) Coming into the matches Tuesday night the Evco 2A was a jumbled mess and when it was over it was fairly unjumbled. Black Hills and Tumwater were tied at 6-1 with the tie-breaker going to Tumwater with their head-to-head win over the […] 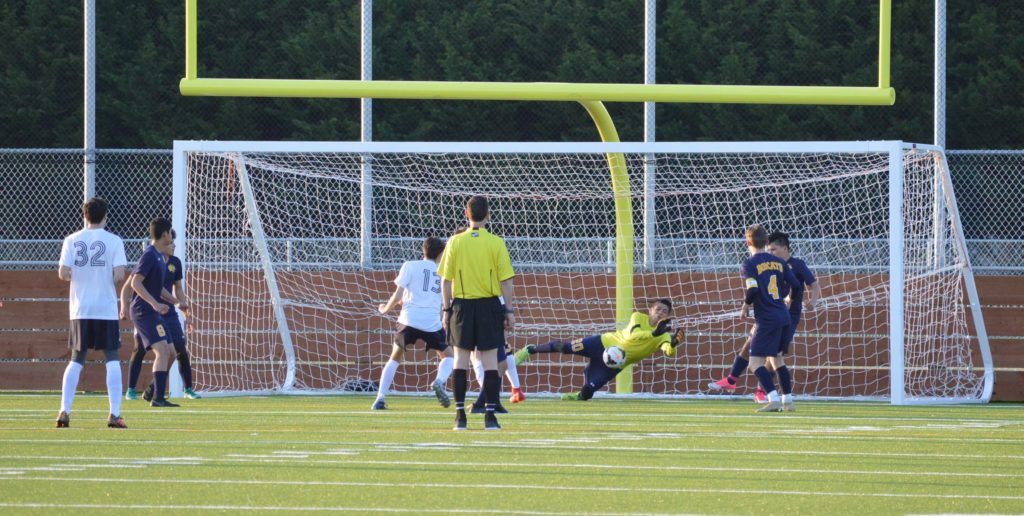