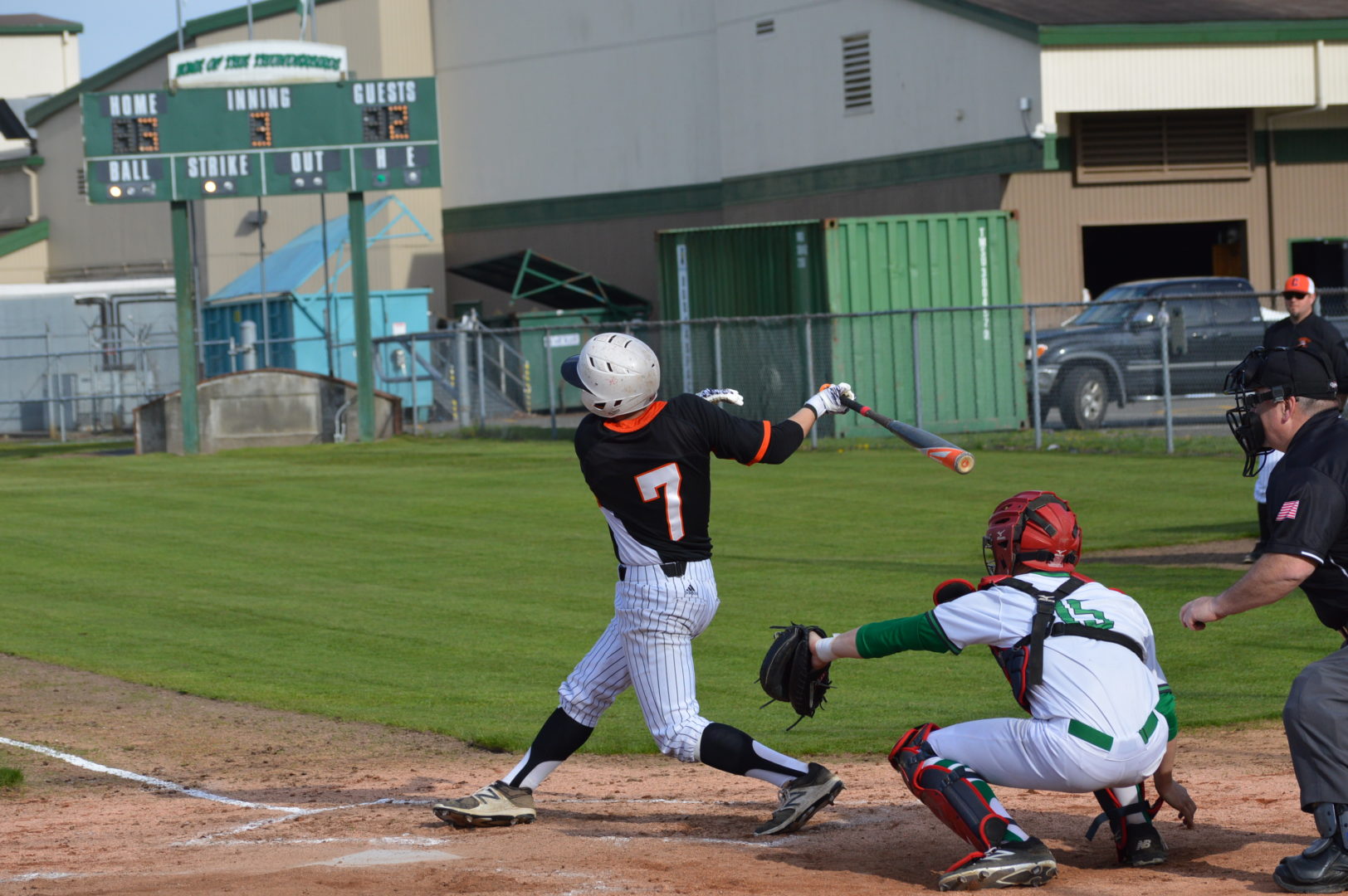 (Tumwater, WA)  The Centralia Tigers ground their way to a tough fought win over the Tumwater T-Birds. Both teams had to rely on their starting pitchers to chew up some innngs as both were coming off double headers from the day before. It didn’t look like either starter would last long and in other circumstances maybe Jared Frias and Landen Jordan would have been taken out after their slow starts but both powered through and kept their teams in the game that went down to the final out.

Tumwater jumped on Frias first in the bottom of 1 when Wyatt Palmer got hit by a pitch and stole 2nd. Hunter Klingelhoffer knocked him in with a 1-out RBI base hit. Landen Jordan followed with a base hit and then after a strike-out Michael Wagar skied one to right field that fell in for a 2 RBI double. Wagar appeared to turn his ankle rounding 2nd and was taken out of the game and after 1 it was 3-0 Tumwater.

Centralia came right back thanks to patience and a good eye as Jordan who made quick work of the top of the order in the 1st struggled mightily in the 2nd. Colby Steele would walk followed by a ground ball from Broc Selstrom who got on due to an error. Derek Beairsto then walked to fill the bases. Jordan then walked Nick Stulken for an RBI and the Tigers were on the board 3-1. After a strike out and a pop up Jordan was looking to get out of the inning with minimal damage but then gave up another walk to Jeremy Wood before getting out of the inning but with just a 1-run lead.

In other game situations both pitchers may have been lifted but both teams were coming off double headers from Wednesday and both hav e games Friday and Centralia yet another game on Saturday so managing the pitching rotation is difficult. Centralia would take the lead in the top of the 4th and with 1 out Nick Stulken walked followed by a bunt base hit from Nolan Miller and the a bunt base hit from Conner Wasson to fill the bases. Wood then sac flied in a run and Frias helped his own cause driving in 2 with a clutch base hit to make it 5-3.

The T-Birds tried to scramble back and got within 1 in the 6th inning when Dylan Grotte got on with a bunt base hit of his own, stole 2nd and moved to 3rd with a pitch to the back stop then scored on a ground ball out from Wyatt Palmer. Tiger Reliever would give up just the 1 run and close out the T-Birds securing the save and the 5-4 win. Our Pacific Sports Spa Players of the Game went to Centralia’s Jared Frias and Tumwater’s Hunter ZKlingelhoffer and our Thorbeckes Sportsmanship Award went to Centralia’s Derek Beairsto.

The Tigers improved to 7-0 while Tumwater dropped to 4-4.