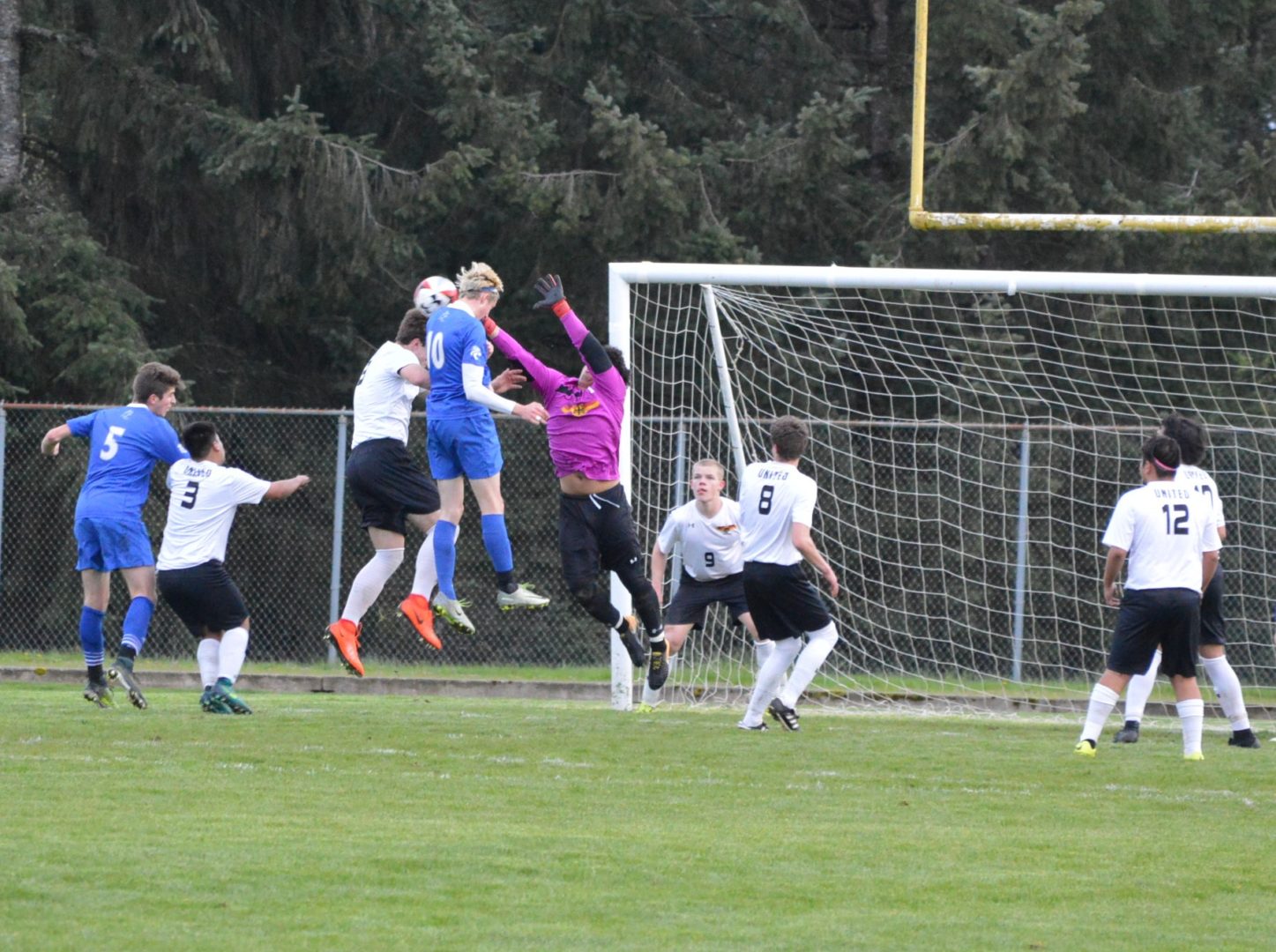 (Winlock, WA) No question this match was important and the play-off feel these 2 teams came to battle with was clear. Coming into the match United was 6-1 in Trico league play tied with White Salmon and La Center a half game back at 5-1. But United beat La Center, La Center already has beaten White Salmon and White Salmon knocked off United so the winner of this match would get a leg up on the re-matches.

It did not take United long to put up a score just 3 minutes into the match off a shot from Andreas Malunat that bounced off Wildcats keeper Alex Moulton right to United’s Isaac Garibay who punched in the quick score. United kept up the attack but the La Center defense held and Moulton made a couple of nice saves thwarting the offensive attacks of United. United’s Gustavo Barragan would add a 2nd goal in the 27th minute that had a touch of controversy. A kicked ball came across the mid-field and and bounced off a United player, some may have felt it was a hand ball but the referee right there quickly ruled it was not and to play on. The ball ended up at the feet of Gus the Bus who broke free and fired it into the net for a 2-0 lead.

La Center did not fold instead rallied and made attacking run after attacking run led by Hunter Leach, Alec Watkins, Brendan Leach and Landon Martin but the the backline for United was tremendous as was United keeper Alan Contreras. Contreras has the confidence to attack from the box knowing if he misses his defenders will be there to cover for him and that’s just what Dawson Hall, Ivan Cibrian, Isaac Cruz and Brian Wood did keeping the Wildcats off the board and they would go to the break with a 2-0 lead.

The United defense again held up for the final 40 minutes denying the Wildcats while not completely playing a defensive half certainly focused on protecting that lead. United then put the game away in the 60th minute when Danny Guijosa fed Andreas Malunat who popped the shot past Moulton for a 2nd insurance goal. The 3-0 lead was more than enough for United to complete the season sweep of La Center and improve to 7-1 in Trico League play. La Center is now 5-2 and now hope the 2nd half of the season plays out like the 1st half with White Salmon beating United and them beating WhiteSalmon to create a true 3-way tie for 1st. United is looking to avenge their loss to White Salmon next Tuesday on the road.

Our Pacific Sports Spa Players of the Game went to the United entire back line of Dawson Hall, Isaac Cruz, Ivan Cibrian and Brian Wood and to La Center’s Hunter Leach. The Thorbeckes Sportsmanship Award goes to United’s Alan Contreras.