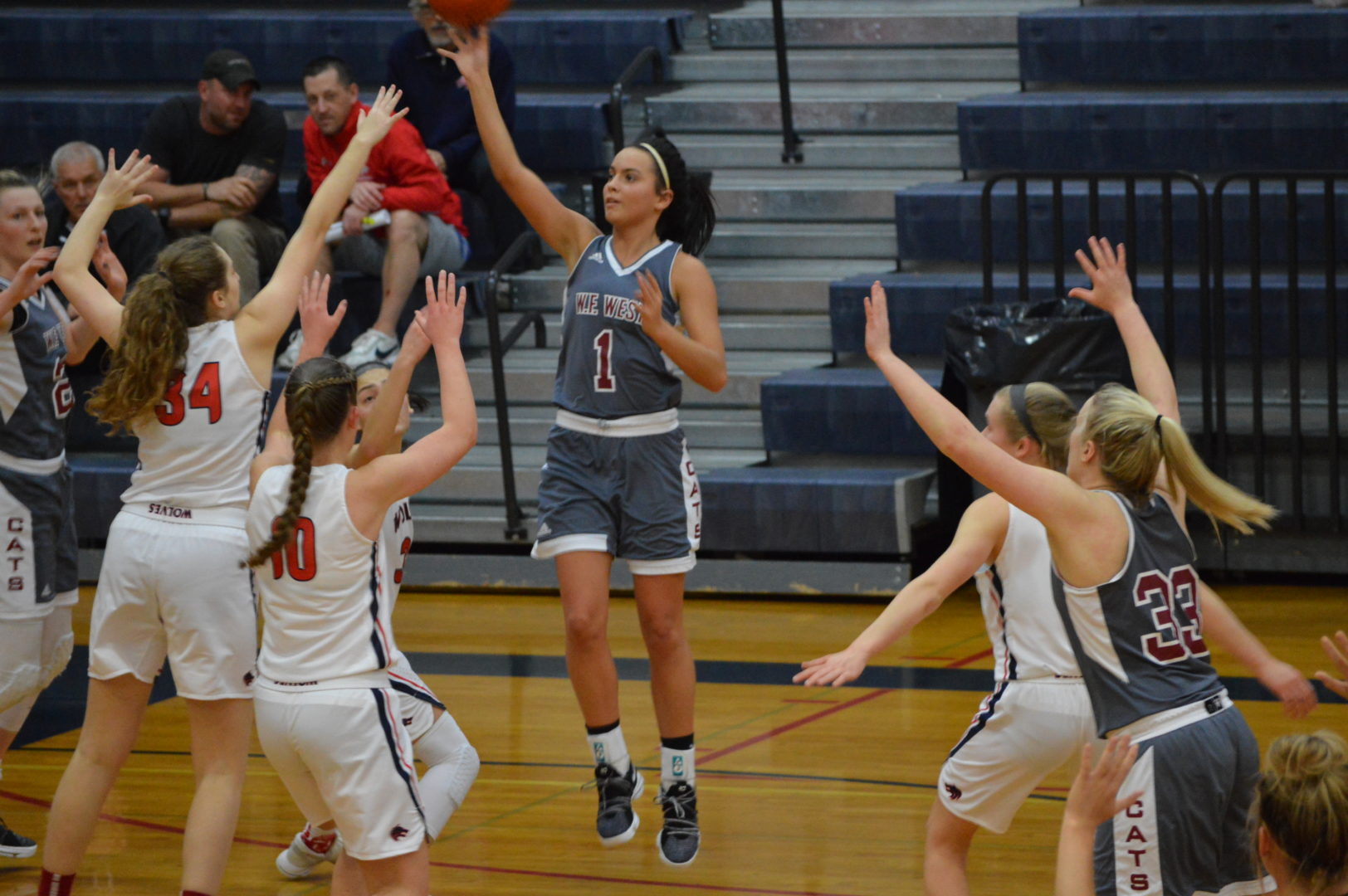 (Tumwater, WA) The WF West Bearcats have 2 ways of winning, they either come out and simply smother you with high pressure defense and shoot lights out and quickly blow you out or they do it while being contested and they get you to think you’re in the game but then you look up at the scoreboard and they lead 12-2 and you sit wondering where the heck did that come from?

It was that 2nd scenario that got the home team Black Hills Wolves Thursday night. The Wolves were steamrolled in their 1st meeting on January 2nd but came out with a lot of energy and pressure on the Bearcats and for the 1st 6 minutes of the game held the high powered Cats to just 11 points but unfortunately the Wolves only had 2. Several missed shots from the paint, turnovers and just panicked passes down the floor to no one did in Black Hills. By the end of the 1st quarter it was a 10-point lead for WFW and it just got worse for the Wolves.

By halftime the Bearcats built a 38-19 lead with a 21-point quarter led by senior Kiara Steen who ripped off 6 points in less than 30-seconds to begin the quarter. The Cats would match that 21-point output with another 21 in the 3rd while holding the Wolves to single digits for the 2nd time in the game. Senior Julia Johnson led the charge sinking a pair of long balls for the Cats.

WF West finished off the job with another strong 4th quarter while the Wolves found a little offense but it was far past when the outcome was certain. Lindsey Nurmi was the shining star for the Wolves as she was recognized prior to the game as the lone Senior. She finished with a game high 10 points but certainly made the Bearcat guards work to get the ball into front court especially early on in the game.

WFW ended up playing all 11 that suited up and all 11 scored. Erika Brumfield led the Cats with 14 while Johnson and Steen each had 13. Annika Waring and Taya McCallum also had solid efforts off the bench for the well balanced Bearcats.

Megan River also scored 10 for the Wolves and Jordyn Bender had good game with 8. Black Hills falls to 4-2 in Evco 2a play and 12-4 overall while WF West is now 6-0 and 14-2. It was also a battle in the State’s RPI rankings where the Bearcats began the game at #4 and the Wolves #5.

Our Pacific Sports Spa Players of the Game went to all 3 seniors. Lindsey Nurmi the lone senior for the Wolves and Kiara Steen and Julia Johnson the 2 seniors for the Cats. The fact there is only a total of 3 seniors combined between these 2 teams should also scare “the you know what” out of the rest of the 2A schools. A great moment in this game was prior when Nurmi was being recognized both Steen and Johnson celebrated by giving her roses and balloons. It was a great act of sportsmanship and better yet friendship between the three.